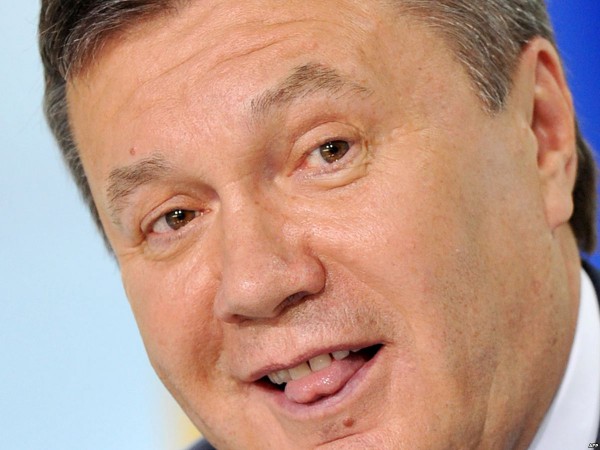 The Verkhovna Rada has deprived the fugitive President Viktor Yanukovych of Ukraine title.

It should be noted that the initiators of the bill were made by Oleg Lyashko, Sergei Skuratovsky, Yulia Tymoshenko and Andriy Andriy Teteruk.

Before this Lyashko author of the bill said that the task of the Verkhovna Rada - not only deprive Yanukovich title, but to bring "the whole gang of Yanukovych's criminal responsibility." "If there were no gangs Yanukovicha- there would be Yanukovych If there were not the ones who helped steal, who voted for the dictatorial laws -. Yanukovych would anyone This is a political pygmy you achieve it, you have made of him a bloodsucker, a dictator.. . And you continue to sit in Parliament, "- appealed to the opposition bloc Lyashko. - "Therefore, the second step - to deprive the criminal block of seats, to bring to justice".

Lyashko said that when discussing the draft decree, the head of BP Groisman proposed to add paragraph 2 of the phrase the law -. Not only take the title of president, but also to shoot.

Lyashko said that the speaker as a modest person asked not to tell.

"I support, shoot, when we'll get out of the ground, and bring here the Maidan Where he killed people, and there he finished his rotten dog's life.", - Said Lyashko.

Groisman, in turn, added that the proposed shoot only by court order.

The only deputy who voted against the deprivation of Viktor Yanukovych President of Ukraine voted the title was a former governor of Kharkiv Mikhail Dobkin.

As reported by "Ukrainian Truth", evidenced by the data on the website of the Verkhovna Rada.

One MP abstained - it was the representative of the Bloc Petro Poroshenko Alex Mushak.

Do not vote for this decision 30 deputies present, 11 of them - from the BPP, three - from the "People's Front", nine - from the "opposition bloc", one - from the party Lyashko, four of the group "Economic Development" and two non-factionalism.

At the same time revealing that 12 deputies from the "opposition bloc" decision support. Among them - Yuri Boiko and Alexander Vilkul and others.