Fruit juices. The hidden danger in a familiar product 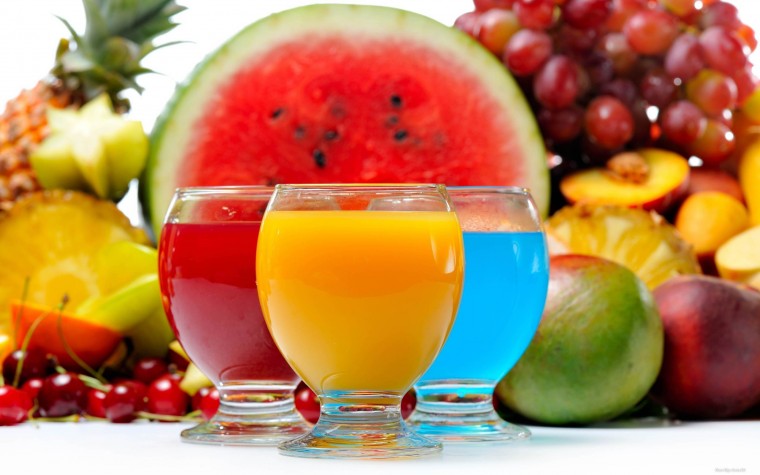 Today fruit juices are regularly consumed by a huge number of people around the world. That, in general, and it is not surprising, since their consumption is positioned by medics and juice producers as an exceptionally useful food habit. Drinking juices means being healthy, that's what most people think. After all, as everyone is well aware, they contain a whole mass of substances useful for the body: vitamins, minerals, antioxidants. And just to drink juices is very tasty and refreshing, especially in hot weather. But, as it turned out, a lot of scientific data has already been accumulated, which makes us reconsider the unconditional use of fruit juices.

In January of this year, the British newspaper Sunday Times published an article in which Dr. Susan Jebb, a professor at the University of Cambridge and an adviser to the British government, was the main scientific expert. Dr. S. Jebb leads a research group on the effects of the diet on obesity, and her words, published by the Sunday Times and dealing with fruit juices, sounded to many like a bolt from the blue.

"Fruit juice is not the same as whole fruit, and it has the same amount of sugar as many classic sweet drinks. Therefore, the juice is also absorbed very quickly, and by the time it enters your stomach, your body does not know whether it is Coca-Cola or orange juice, to be honest. I have to say that all this is exactly the way to change habits. Stop drinking juice and eat natural fruit, "- said Dr. S. Djebb.

But this is a loud statement, you can say, the most finale of the story with fruit juices. And the beginning of it was laid almost a quarter of a century ago. The first to sound the alarm American pediatricians. In 1991, the Nutrition Committee of the American Academy of Pediatrics (AAR) issued a statement that sorbitol, a sweet taste substance contained in fruit juices along with fructose and glucose, can cause a violation of absorption in the intestines of nutrients. The result of this poor absorption, as the Americans said, may be not only an intestinal disorder, but also a deficit in the body of a child of important nutrients and trace elements, fraught with deteriorating children's health and a violation of its normal development.

Similar data were obtained by Columbia University professor Barbara Dennison and her colleagues, who conducted a large study on the effects of fruit juices on children's bodies. In 1997, the medical journal Pediatrics published an article titled "The excessive consumption of fruit juices by preschool children is associated with low growth and obesity." Comparing several groups of children of 2 and 5 years, B. Dennison and her colleagues found that children who consumed fruit juices more than 12 liquid ounces a day (this is approximately 1.5 cups) had a delay in development and excess weight: "Children, Drink a lot of fruit juice, consume a large proportion of the total number of calories from simple sugars (twice the fructose and 80% more glucose) than children drinking less juice. For the most part, these are simple sugars and empty calories. Children who drank a lot of juice, replaced them with other more nutritious foods, some of them suffered from a violation of absorption of carbohydrates (especially fructose or sorbitol) that make up fruit juices. Both these factors can adversely affect growth, contributing to the development of short stature and obesity. "

And, what attracts attention in this study: only the excess of juices led to negative consequences. When children who consumed the same amount (more than 1.5 glasses) of milk per day were examined, they did not show any abnormalities. It can be assumed that the delay in the development of children, which parents have given too much juice, may be associated with the suppression of growth hormone. Physicians and biologists are well aware that growth hormone is a counterinsulant hormone, that is, these two hormones can not simultaneously be present in the blood. If, in response to the intake of carbohydrates contained in the juice, insulin begins to be produced, the growth hormone is suppressed and its secretion does not occur. And without the proper level of growth hormone, the normal development of the child is significantly hampered.

As a result, after all the studies conducted, the American Academy of Pediatrics made a statement, which, inter alia, stated that "fruit juice does not provide nutritional benefits compared to whole fruits for children." Also, American academicians noted the existing relationship between excessive consumption of juices and obesity and advised parents to "encourage children to eat all fruits to meet their recommended daily dose of fruit."

To another possible danger from fruit juices turned Russian physiologist R.S. Minvaleev. He believes that the hyperactivity of children at school age, which many parents face today, is often caused by excessive consumption of "fast food" dishes and drinks with a high content of simple carbohydrates. Among such drinks there are also fruit juices that are devoid of fiber and contain added sugar. Almost instantly getting from the stomach into the blood, simple carbohydrates of fruit juices bring a large number of calories, which can cause hyperactivity in children.

The danger of this hyperactivity, according to RS Minvaleyev, should not be underestimated. In the future, it can be the main cause of the emergence of nicotine, alcohol and drug dependence in adolescents. This relationship can easily be explained: when anomalous activity is difficult to send a huge excess of energy to something useful, as with it there is a lack of attention and the inability to for some time to concentrate. Talking teenage slang, the child begins to "demolish the roof." And then, as a "reassurer" and an energy absorber, drugs and alcohol can appear in the life of a teenager.

But if children drink mostly industrial juices that can contain an excess of simple carbohydrates by adding sugar, then adults have no such problem. They can afford to drink freshly squeezed juices without sugar. It would seem that there can not be any questions here. And freshly squeezed juices can be consumed without any fear. But it turned out that the doctors have such claims for such juices as well.

The authoritative English biochemist Zhores Medvedev drew attention to another potential danger of fruit and berry juices, which not everyone knows. The fact is that many juices are bad or completely incompatible with taking medicines. This is especially true for people taking medicines to reduce blood pressure and to prevent heart attacks.

As an example, J. Medvedev cites the case, which was described in detail in the British medical journal British Medical Journal. An elderly patient, a cardiologist, prescribed an anti-infarction drug that reduced the possibility of blood clots and blood clots. At the same time, for this general improvement, this patient drank cranberry juice daily, rich in many useful vitamins and antioxidants. After six weeks of this combination of juice and medicine, the person who took them died suddenly.

After a thorough investigation, the British doctors managed to establish that the cause of the patient's death was poisoning with a drug that was usually well tolerated. And it happened that's why. Both the flavonoids of cranberry juice and the medicine before being removed from the body were to be split in the liver with a special enzyme called cytochrome P 450. Competition arose for the sequence of the cleavage, and because of it the drug was not excreted from the body, accumulating to dangerous concentrations.

But, as doctors say, not only cranberry juice is a danger when taken together with medicines. Grapefruit juice is also included in the "black list" of foods that doctors categorically do not recommend to use with tablets. The potential danger of such a joint application is explained by the fact that the enzymes of our body "recognize" primarily the natural substances contained in the juices, giving them priority in the cleavage and excretion from the body. And so the drugs "wait" for their turn, accumulating to dangerous concentrations.

Famous American endocrinologist Robert Lustig, who has studied the influence of refined sugar on human health for many years, also openly opposes the use of fruit juices. In his opinion, even freshly squeezed juices lose a lot to whole fruits due to the lack of fiber in them. Fiber, as is known, has a retarding effect on the absorption of carbohydrates, not allowing too much to increase the level of glucose in the blood. Depleted cellulose juice, according to R. Lustig, can cause not only the hyperactivity of children, but also contribute to the development of diabetes.

This assumption was recently confirmed. In 2013, an international group of Japanese, British, American and Singaporean scientists (including those from Harvard and Cambridge universities) headed by I. Muraki published the results of his scientific work. They summarized the data of three large studies on the effect of fruit and fruit juice consumption on the risk of developing type 2 diabetes in which 200,000 people participated from 1984 to 2009. Their findings were as follows: "The consumption of a large number of whole fruits, especially blueberries, grapes and apples, is significantly associated with a lower risk of diabetes, while a greater intake of fruit juice is associated with a high risk of diabetes"

Such a relationship between fruit juices and diabetes scientists explained not only the lack of fiber in the juice, which does not allow glucose to rise sharply in the blood, but also a reduced content of other nutrients. So, the resveratrol substance, which is actively studied today as a potential "cure for old age", is found mainly in the skin of grapes and very slightly - in juice. A similar picture can be seen with other fruits. Thus, polyphenols with antioxidant properties contained in citrus (oranges, grapefruits) are most concentrated, as it is not surprising, in the connecting white fibers, and not in the liquid part of the fruit. It is clear that squeezing from the orange juice, a person deprives himself of the bulk of these useful antioxidants.

Similar results confirming the possible relationship between fruit juices and diabetes were obtained in 2008 by Dr. Lydia Bazzano from the University of Tulane (New Orleans) and her colleagues from the Harvard Medical School. For 18 years, scientists and doctors have observed a group of women, 70,000 people, comparing their health with food habits. Their conclusion was exactly the same as in the previous study: "Consumption of green leafy vegetables and fruits was associated with a lower risk of developing diabetes, while consumption of fruit juices may be associated with an increased risk of this disease among women." Scientists have already traditionally explained such dangerous interconnection by the lack of many useful components in juices that are part of whole fruits. In their opinion, an excess of fructose in juices, which is sometimes considered a safe substance, can also worsen the function of the hormone insulin.

Perhaps all this data will force some people to reconsider their eating habits and replace fresh and industrial juices with whole fruits and vegetables. Although, of course, this is not so simple, because since childhood we have heard the words about the great benefits of fruit juices. In any case, as many doctors and nutrition experts say, fruits are no worse, and in many ways better suited for our body as an indispensable supplier of many useful substances that help us to fight with old age and diseases.