Red moles on the human body 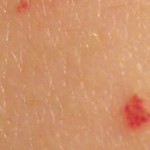 Moles are not unusual or unusual for a person. Since olden times, birthmarks could be considered as ugliness and anger of God, and a sign of fate.

Of course, in fact, this is a clear, distinguishable skin formation that a person has from birth.

Moles, in most cases, are not a pathology or physical disability. Of course, another thing entirely is birthmarks, which have irregular shapes and sizes and are related to skin pathologies. In addition, such moles are difficult to remove, while not harming human health.

Birthmarks are violations of the development of the skin, which are characterized by the appearance of formations of various shapes and sizes, which consist of nevus cells. This type of cell is an accumulation of skin cells that contain melanosomes or pigment granules (melanocytes).

Strawberry hemangiomas aged five to ten years disappear. That is why, they are not advised to treat. You just need to wait until this birthmark turns pale or disappears. Such moles can only be removed if they increase and prevent the body from functioning properly.

One of the rarest types of birthmarks is cavernous hemangioma. It can occur in one in a hundred newborns. The stain itself consists of mature and large elements of blood vessels, while it affects not only the surface layers of the skin.

Basically, this is a loose bluish-red mass, which does not have such clear boundaries as that of an earthy one. Such birthmarks grow only in the first year of a child’s life, and by the age of twelve they completely disappear. Sometimes, in place of a hemangioma, an almost imperceptible scar remains.

A stork bite is another type of birthmark. Such moles are orange-pink in color and appear as spots on the eyelids, near the nose or mouth, as well as on the forehead. They are visible up to two years, and then begin to appear only when the baby is tensing or crying. They practically do not create cosmetic problems in the subsequent life of a person.

Fiery nevus or wine stain are also moles that are red. They consist of dilated capillaries. They are considered permanent because they never change color or disappear. You can get rid of such birthmarks with a laser.

Mongolian spots are blue or pale gray. They can be found on the legs, back or buttocks. Such birthmarks cannot be called rare.

Coffee stains come in many forms: chloasma, lentigo, moles. If there are more than seven of them on the skin of a child, you need to consult a doctor.