Zip code is a sequence of letters or digits added to a mailing address in order to facilitate sorting of correspondence, including automatic ones. Currently, the vast majority of national postal services use zip codes.

The postal division of Ukraine follows the administrative division of the country. The first two digits of the postal code of modern Ukraine correspond to a certain region or a city of central subordination. Each district has a code like XYZ **.

Until the late 1990s, Ukraine had a six-digit Soviet postal indexation system, and then moved to a new five-figure system (the international standard). From August 1, 1999 to January 1, 2000, both old and new postal codes operated simultaneously on the territory of Ukraine. Since the year 2000, a five-digit system has been used.

The construction of a modern postal indexation system in Ukraine is based on the following principles: 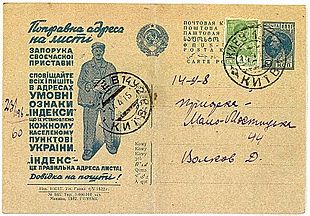 A marked postcard of the USSR with an appeal to indicate the index on postal items and postal codes of Kiev (14U8 and 14U2).

Stamp of registered letter with the indication of postal code 12U1 (Kiev, USSR, 1930s).

It was first used in the USSR from 1932 to 1939 under the name "Index" and was a code of the form "number-letter-number", for example, 12Y1, 14U8, etc. At the same time, the letter "U" in the middle of the code meant "Ukraine" , The first number is Kiev, for which numbers from 11 to 20 were provided, and the number at the end is a smaller postal area. In 1932 in Kharkov, which at that time was the capital of the Ukrainian SSR, was issued a special index of Ukrainian postal codes, where the indices began with numbers from 1 to 10. The abolition of the postal code system is associated with the outbreak of World War II. Subsequently, the postal code was introduced in 1971.