Kusudama is a paper model, which is usually (but not always) formed by stitching together the ends of a set of identical pyramidal modules (usually these are stylized flowers, folded from a square sheet of paper), so that a ball-shaped body is obtained . Alternatively, the individual components can be glued together (for example, the Kusudama on the bottom photo is completely glued, not stitched). Sometimes, as an ornament, a brush is attached from below. In ancient Japan kusudams were used for medicinal gatherings and incense.

Kusudamy is a special class of origami models, which differ in their own atmosphere and technique of assembly. Kusudama is distinguished by clear lines and competent proportions. In addition, its assembly does not take you much time. 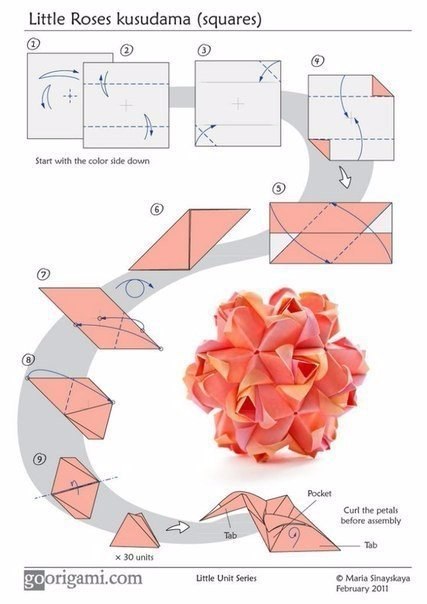 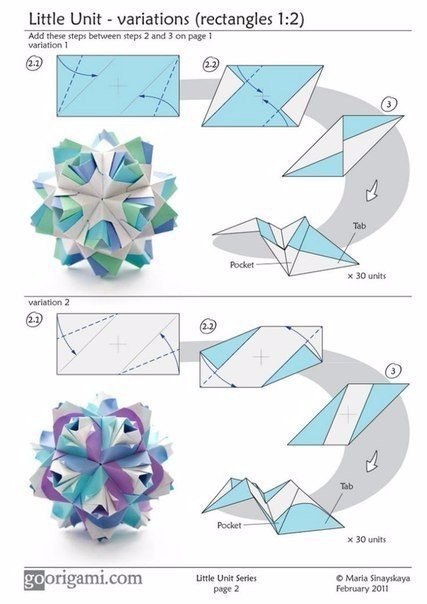 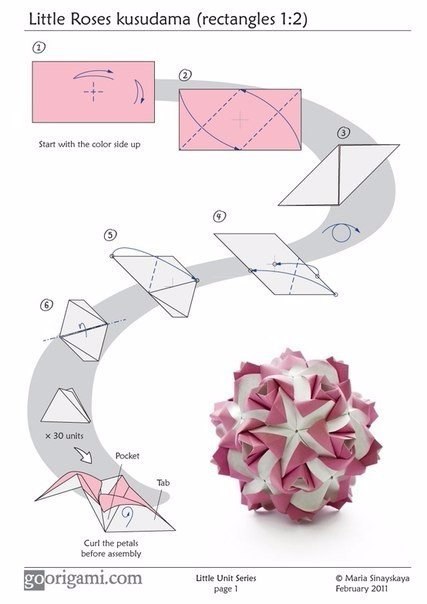 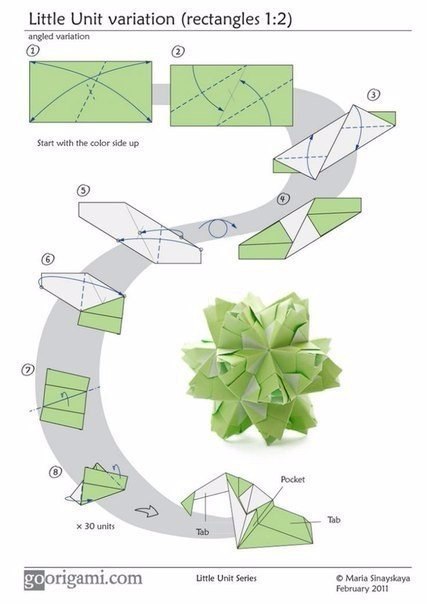 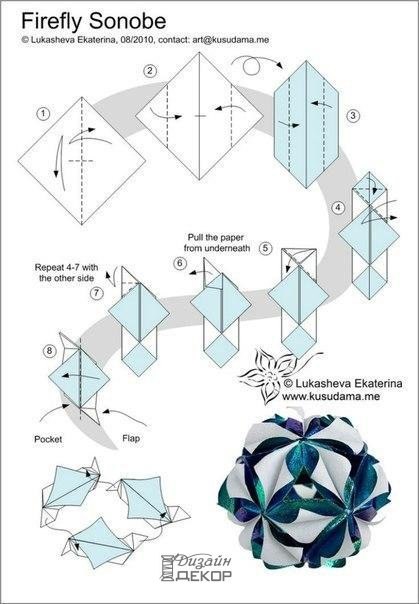 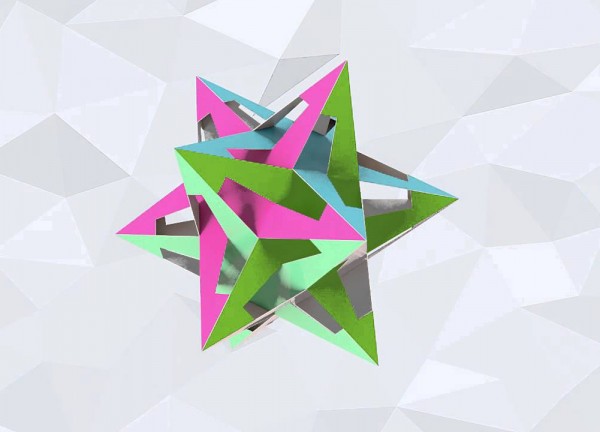 So, to assemble Koutsuda Stellated Dodecahedron you will need:

For the assembly of this kusudama, it is best to use two-sided paper, painted in different colors. So your kusudama will be even brighter and more interesting.

We will put together the kusudama under a detailed scheme from the author of the model. We hope you can easily figure out and add this interesting model. Good luck! 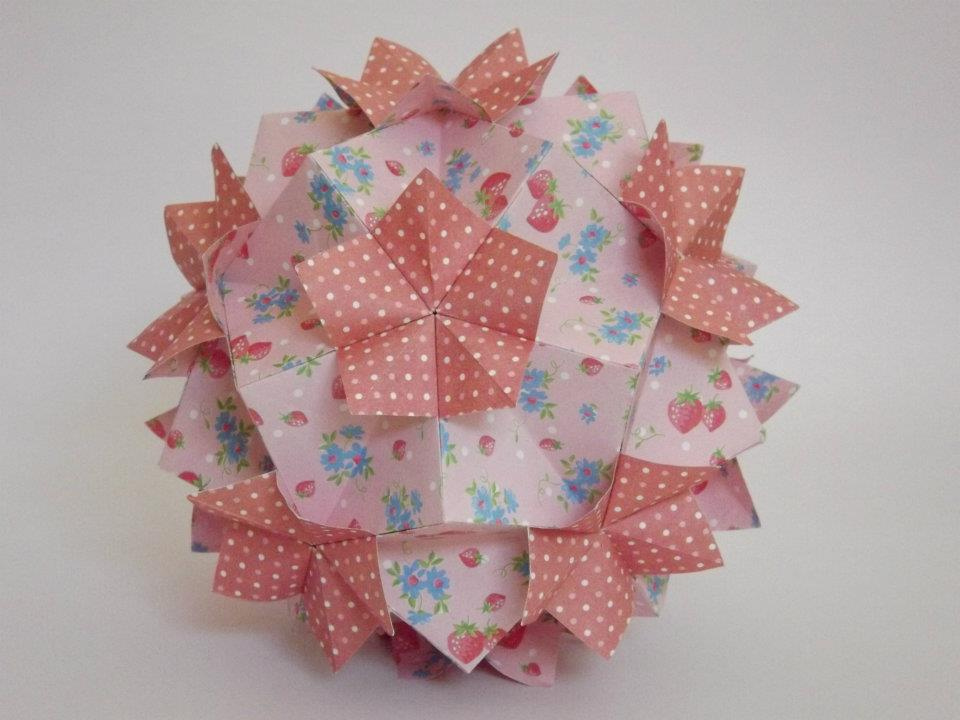 Spring is already around the corner and so you want to enjoy the first flowers, the sun and good weather. Today we will give you a piece of spring with a beautiful kusudama with the same name from the master Tomoko Fuse. So, to your attention Spring Kusudama.

Each module is simple enough to be assembled and it will not take you much time. And the assembly of the Kusudama itself is not particularly difficult. The modules are attached to each other without the use of glue, they are kept solely on the folds of the paper.

Talented master of origami Tadashi Mori will show you all the stages of the assembly. We hope you will succeed! 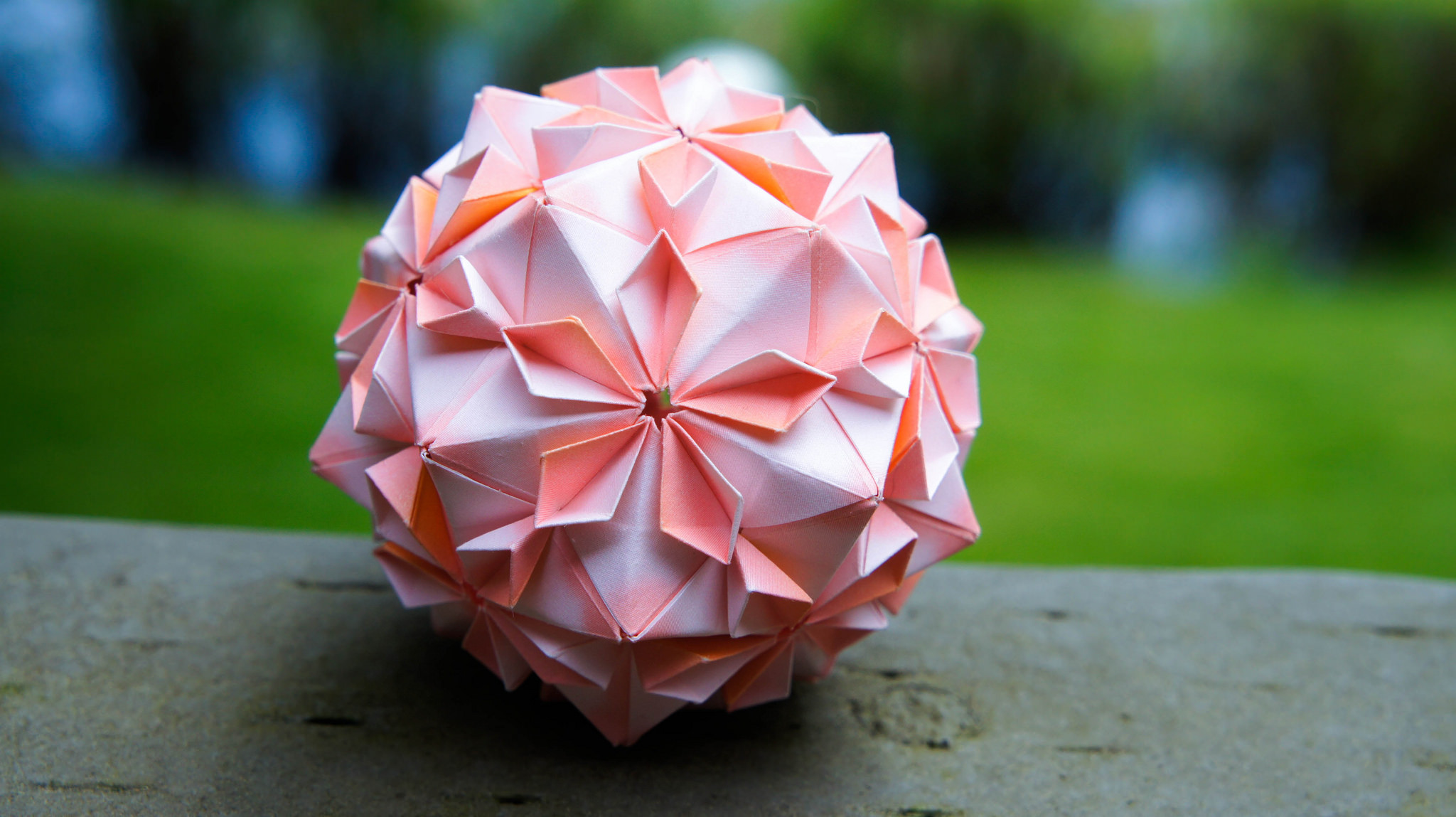 You can raise your spirits not only with meeting friends or good spring weather, but also contemplating beautiful things, especially if these things are made by yourself. We present to your attention one more spring kusudama from the master of the business Tomoko Fuse under the name Cherry Blossom Ball - or Cherry color.

Each module for this kusudama is simple enough. You will just need to repeat the actions of the author of the video lesson. As for assembling modules in a single ball, you need to be extremely careful and try to connect the modules as accurately as possible. 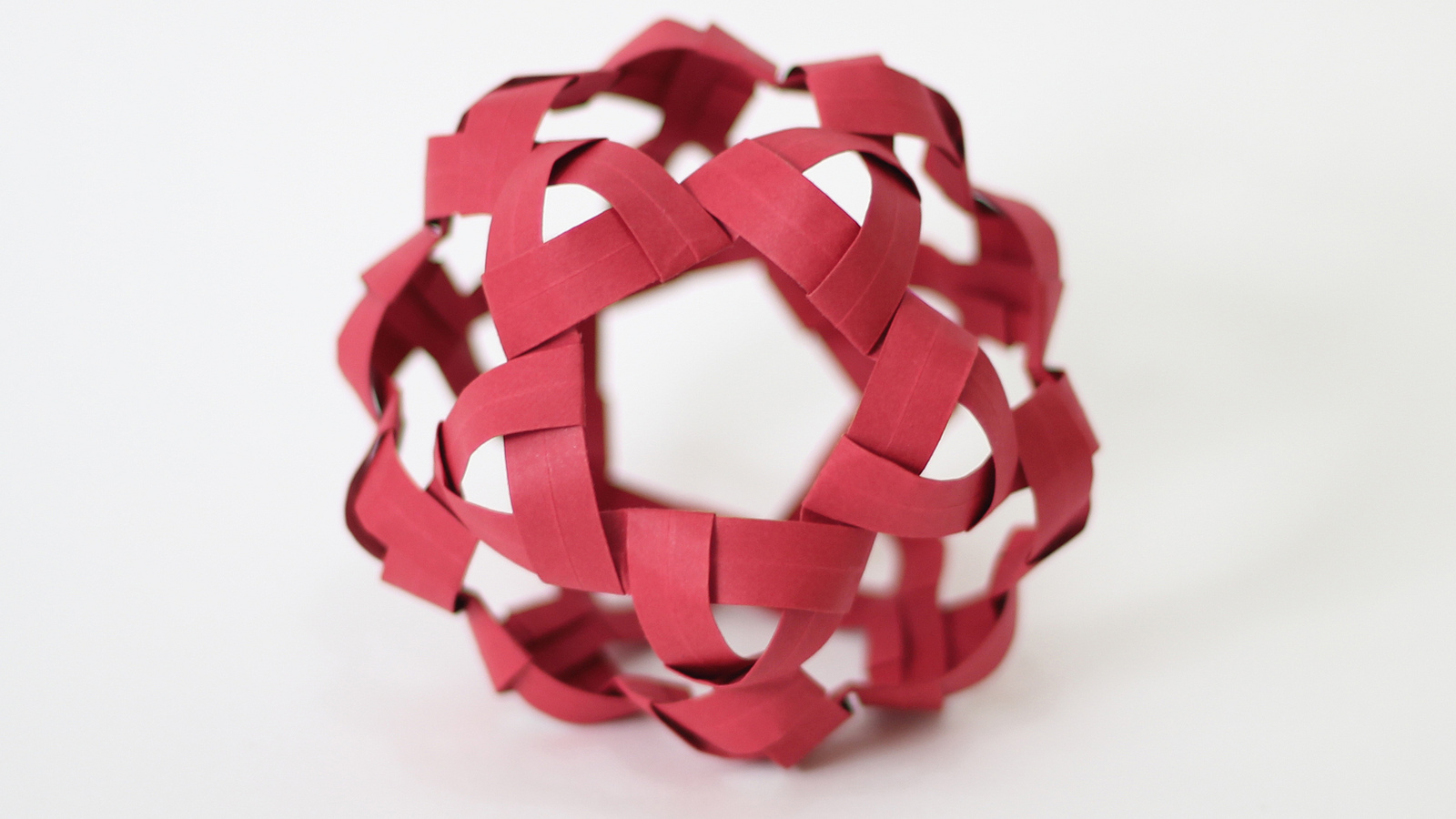 In this article, we want to again offer our readers to fold the kusudama. This time, his kusudama is represented by the famous origami master Tadashi Mori. His name was given to his kusudama on behalf of his girlfriend Aline. Well, shall we begin?

Each model is folded and the Kusudama itself is quite simple. Of the rectangles are formed triangular billets, which then add up to the real kusudama.

As always, Tadashi Mori shows in great detail and tells how to fold his models. We hope, you will understand everything and you can easily add such a beautiful kusudama. We wish you good luck! 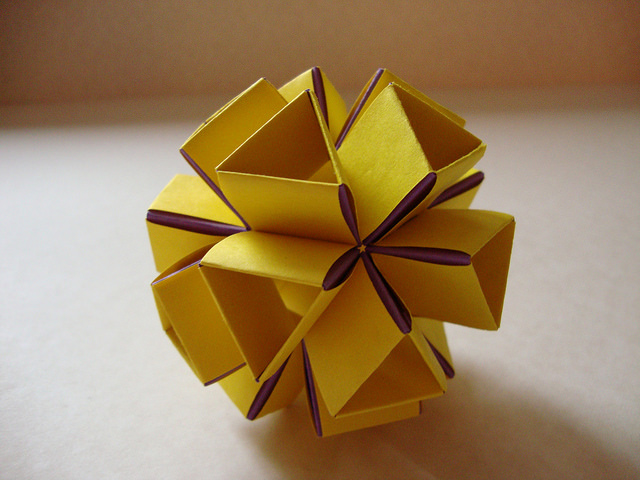 We present to your attention the not quite ordinary Kusudama Snapology Icosahedron, authored by Heinz Strobl. This Kusudama is composed of Snapology technology, that is, from rectangular strips of paper that are specially connected to each other. Interesting? Then welcome!

Strips of paper are recommended to be made from ordinary rectangular A4 sheets. The dominant color you need 2 sheets, and the secondary - 3 sheets. The dominant color you will have outside the Kusudama, and the secondary color is to look between the connections of the modules. Each sheet should be divided into 8 pieces along the long side and cut into strips.

Next, you need to add a certain number of modules and connect them together, as shown in the video tutorial. Also you can see the photo master-class on the assembly of this kusudama.

Kusudama from the octahedra according to the scheme Meenakshi Mukerji 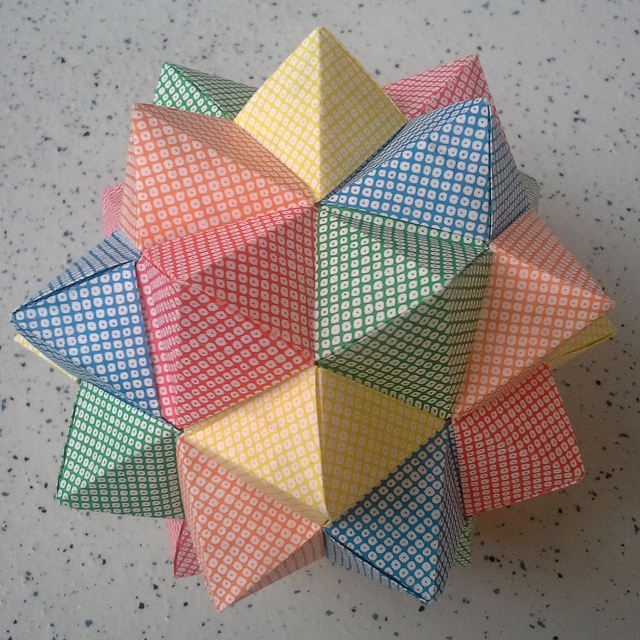 We present to your attention a very interesting and simple enough in the assembly kusudamu called Compound of 5 Octahedra from the master of origami Meenakshi Mukerji. Collect this kusudama can even children, there is nothing complicated, and the result is very original.

So, to build such a kusudama we need:

First you need to add modules. In the video lesson that we offer below, you can see the entire build process with detailed descriptions. After all the modules are stacked, you can start assembling the Kusudama. No glue or additional devices are needed for this. Good luck!

Kusudama dodecahedron according to the scheme of Robert Neale 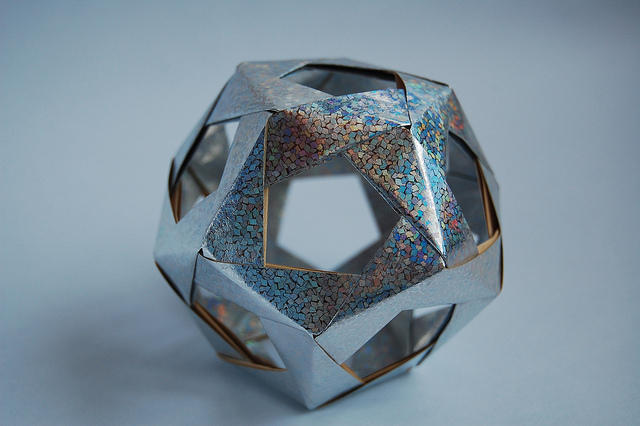 We present to your attention the most beautiful dessert cousin from the master of origami Robert Neale. Folds such a Kusudama from the modules, which are small triangles with projections for connection. Quite simple, but very spectacular kusudama.

In order to add this kusudama you will need:

Most of the time you will have to build the Kusudama together. The modules themselves are quite simple.

Shows the entire assembly phase of this origami model Ignacio Smith. We hope you will understand everything and you can easily put this model together. Good luck! 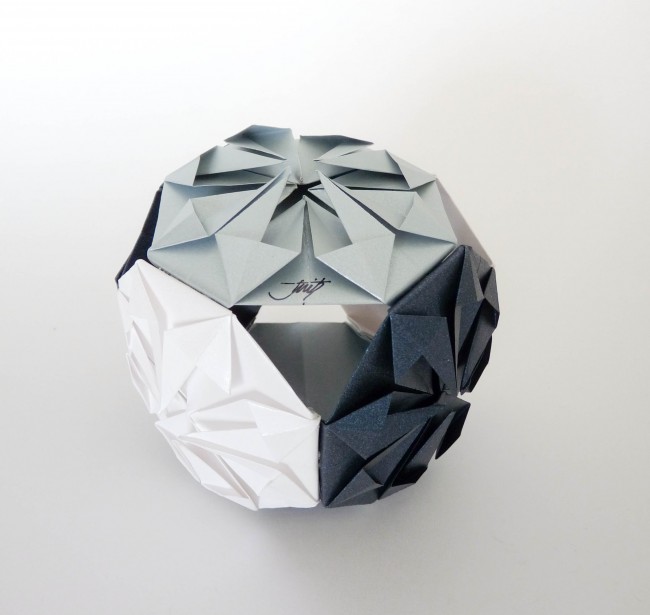 To invent their own origami models is a real skill that only extraordinary people can do. Sometimes the most interesting things are made up of the simplest components that seem to be in everyone's mind. Today we will put together with you a simple, but very beautiful kusudama "Brilliant" according to the scheme of Makoto Yamaguchi.

To assemble the modules of this kusudama, glue is used. Many may say that this is contrary to the traditions of origami, but in fact, authentic Kusudam were sewn with threads, and later they began to use glue. Is going to such a kusudama quite simply and quickly. Hope you enjoy.

Kusudama "Pentagon" according to the scheme of Jun Maekawa 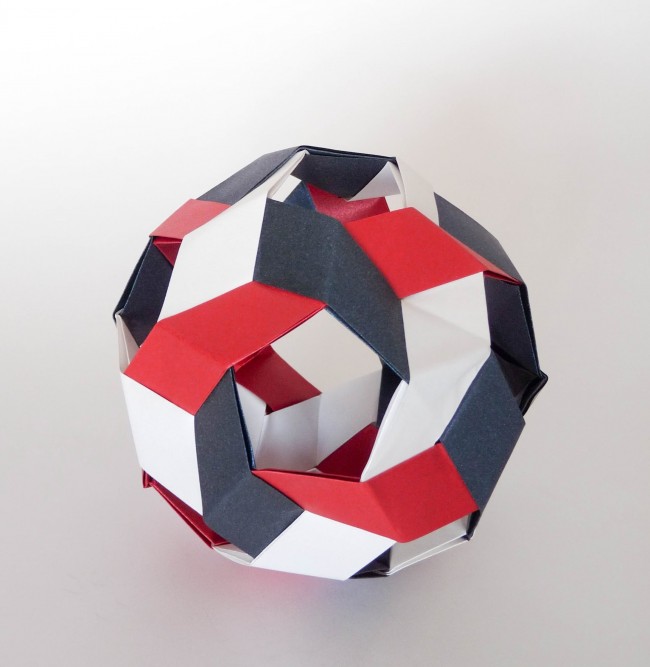 Original Cossacks, which seem to be possible to watch forever, are among the most favorite origami models for many people. These magic balls not only look interesting and attractive, but also carry a charge of positive energy invested in them by the creator. Today we will put together one more beautiful Kusudam called "Pentagon" according to the scheme of Jun Maekawa.

Without the aid of glue or any additional materials, the modules are attached to each other solely by means of protrusions and pockets of paper. All in the best traditions of origami art.

A video lesson from Ignacio Smith on assembling the Kusudama "Pentagon" to your attention! 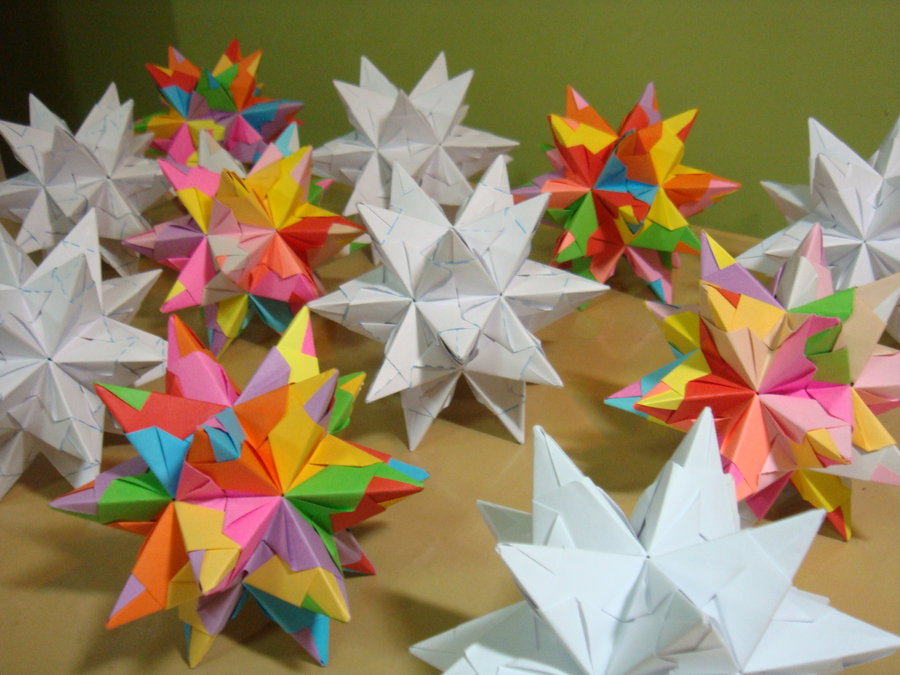 Bright kusudamy, which simply amaze your imagination with its unthinkable form and interlacing modules, are quite an extensive topic in origami. Models kusudam there is a great variety, let's try to add at least some of them. Today we present to your attention the Kusudamu Bascetta Star from the master Paolo Bascetta.

The assembly of one module takes a little time, about 5 minutes, and to the 20-30th module you will add them in 2-3 minutes. The main task is to assemble modules in Kusudam. It will take all your diligence and attentiveness.