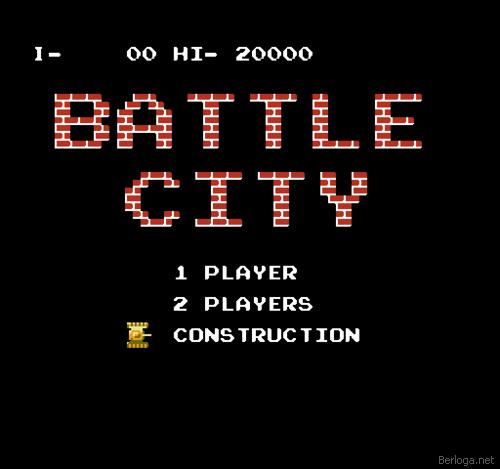 Battle City ("City of Battles") - known in Russia and CIS countries as "Tanchiki". One of the first games for the NES platform. Its predecessor was the arcade game Tank Battalion, released by Namco in 1980.

The action polygon is visible from the top. The player must, by operating his tank, destroy all enemy tanks at a level that gradually appears from the north of the playing field. The enemies are trying to destroy the player's base (at the bottom of the playing field in the form of an eagle) and his tank. At each level, twenty units of enemy armored vehicles of different types must be destroyed. If the enemy can destroy the base or deprive the player of all lives - the game is lost.

The game consists of 35 basic levels. The level is a square field of 169 sectors (13 × 13). At the passage of 35 levels, they begin anew, but enemy combat units have more health, and when they hit, a bonus always appears.

Enemy tanks:
There are four types that vary in speed and strength:
Ordinary tank (100 points);
Armored personnel carrier, which is distinguished by an increased speed (200 points);
Rapid-fire tank (300 points);
Heavy tank (armored car), which can be destroyed by four hits (the tank changes color depending on the remaining strength) (400 points).

The fourth, eleventh and eighteenth tanks, irrespective of the type, appear in iridescent colors. If a player enters such a tank, then a bonus appears on the card. In the event that the "bonus" tank is a heavy tank, it is enough to hit it for the appearance of a bonus. If you do not take the bonus until the appearance of a new overflowing tank, then the bonus disappears.

Bonuses:
Tank ("life"). Adds one life to the player.
Five-pointed star (medal). Improves the player's tank (one star - the speed of the projectiles is increased, two stars - two shots can be fired until they reach the obstacle, three stars - the tank can penetrate the concrete walls).
Hand grenade ("bomb"). Explodes enemy tanks on the map. For this points are not given.
Watch. For a while, stops the enemies and their shooting.
Bayonet shovel. Temporarily makes the brick wall of the Headquarters concrete, which protects it from enemy shells.
Helmet. Temporarily makes the player's tank invulnerable.

In total for one level it is possible to receive three bonuses. Taking a bonus brings 500 points. The bonus appears after hitting a flashing tank. These tanks appear the fourth, the twelfth and eighteenth tanks in the general sequence.

It should be noted that initially the developers had the possibility of two more bonuses (the place in CHR ROM allowed it). At least the graphics of one bonus (in the form of a pistol) were present in the original game always, and the graphics of the second bonus was a drop that could appear only when the secret message from the developer was shown. Moreover, the bonus appearance algorithm is such that initially it was possible to get the bonus index from the pseudo-random number generator, and then choose from the array directly in the ROM: .BYTE 0, 1, 2, 3, 4, 5, 4, 3.

As you can see, the last two bonuses were replaced by, respectively, a hand grenade and a watch. Therefore, they are statistically more common.

Battle City was one of the first games where two could play simultaneously. Both tanks appeared at the headquarters. If another player gets into the tank of a player, then he stops for a while.

The version of Battle City for Game Boy is more complicated, since the card does not fit completely on the display. Therefore, while the player is in some corner of the map, it is possible that one of the enemy tanks will get to the base and destroy it. This is compensated by the radar, which in the NES version is not, as well as the ability to stop the game and consider the playing field, "tearing off" the camera from the player's tank.