Everything for Motorists ... Adjusting the rearview mirrors ...

According to statistics, 90% of drivers mirrors are incorrectly adjusted

Rearview mirror - a mirror mounted on a vehicle and allowing the driver to see what is happening behind. On cars and motorcycles, the presence of rear-view mirrors is mandatory. On modern cars, usually three rear-view mirrors are installed: one in the passenger compartment above the windshield, and two outside on the front doors - left and right.

If you, looking in the side mirror, see the rear wing of your car, this means that the mirrors are not configured correctly. Rear-view mirrors are designed to provide an overview of the road behind and on the side of the vehicle. They are one of the main parts of the car responsible for safety. Correctly adjusting the rear-view mirrors is very important, because the driving safety depends on this to a large extent. Customized mirrors provide maximum all-round visibility for the driver.

Lean to the left so that you can almost touch the side window. Adjust the mirror to see the rear wing of the car (as shown in the picture). When you sit in a chair as usual, in the mirror you will almost not see the side wing of your car.

Lean to the right so that your head is in the center of the car. In the mirror you should also see the rear wing of the car (see picture). 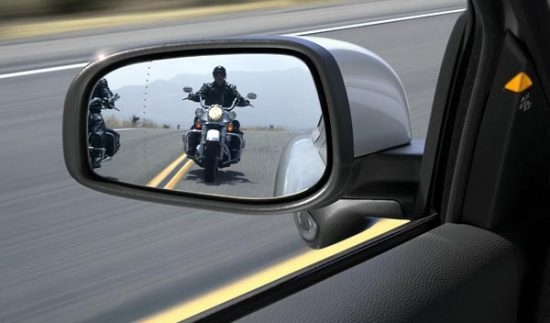 A ride with mirrors rebuilt in this way, you will notice that there are much less “blind” zones. You see the car in the rear-view mirror, and if it starts to overtake you, you still see part of it in the rear mirror, and part is already in the side. Thanks to this, it’s easier for you to change lanes, and the risk of an emergency is significantly reduced. 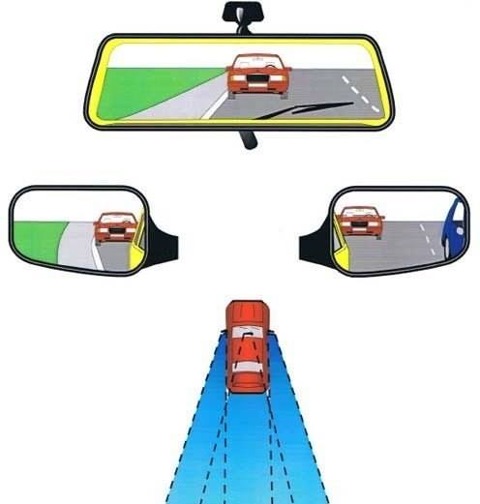 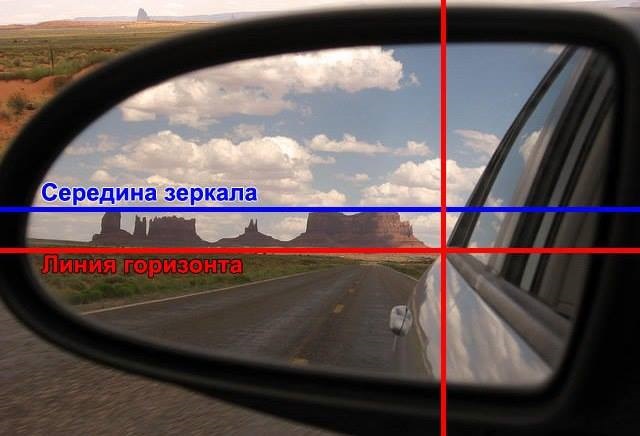 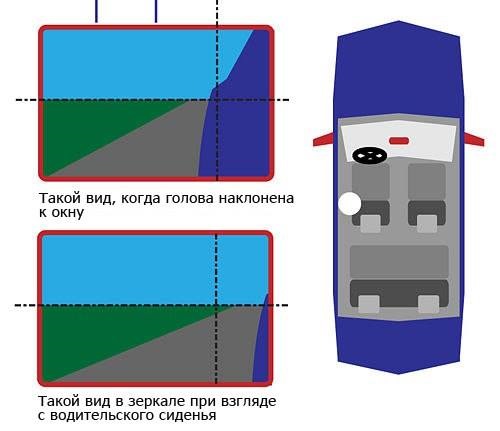 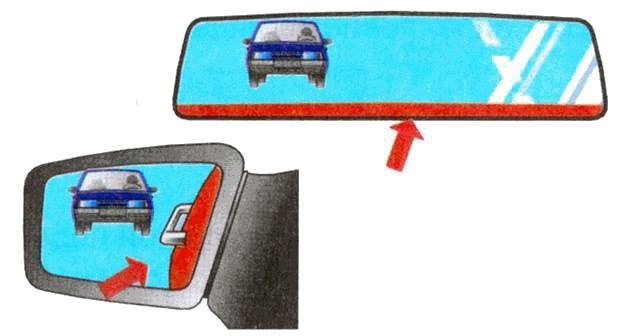 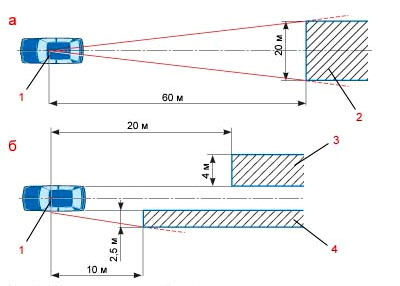 Most car mirrors, both internal and external, consist of:

Optical element - a detail of a mirror that reflects light and forms a reflected image, exist:

The adjustment of most of the inside and the simplest external mirrors, in which the optical element is stationary relative to the body, is carried out by turning them on a single hinge. More sophisticated exterior mirror designs allow the optical element to rotate relative to the body using a hinge system. Most mirrors of this type are equipped with a remote adjustment drive. The drive can be lever, cable or electric. In the first two cases, the control is located inside the passenger compartment at the place where the mirror is attached to the door or in another convenient place on the door trim. The electric drive of the exterior mirror has two electric motors located in its body, which rotate the optical element in the vertical and horizontal planes. The drive is controlled by a switch ("right - left mirror") and a key involving electric motors. Typically, the switch and the key are combined in one unit located on the door, dashboard or center console.

And it all began, of course, with a woman. Well, who else would suggest using a mirror in a car? Back in 1906, a book was published by Dorothy Levitt entitled “Woman and a Car”, containing many useful tips for the ladies who mastered this new outlandish vehicle. Among them was advice to keep a mirror with a handle for rear view handy while riding. The idea didn’t take root right away: in those days, street traffic was not too intense, so there was no particular need for ordinary drivers to look back and around. Another thing is the race - here the advice of Mrs. Levitt came in handy. In 1911, racer Ray Harron, unable to find a suitable mechanic (whose duties at that time included escorting the rider on the road and navigating functions during the competition), adapted the mirror to his Marmon car, which allowed him to win the Indianapolis 500 racing grand prize .

After that, the engineers of the automotive industry also realized that just a year after the triumph of Harron, Elmer Berger patented the design of the first rear-view mirror, which began to be used on production cars. Since then, mirrors have become an invariable attribute not only of cars, but also of motorcycles, mopeds and even bicycles.

Nowadays, cars usually have three mirrors - two side mirrors and one salon. However, this was not always the case. Previously, drivers were content only with a cabin mirror. In the 50s, cars began to be equipped with a left side, and a little later, a side right mirror.

The side mirror farthest from the driver is sometimes slightly convex, which makes it possible to increase the viewing angle. True, one has to pay for this by distorting the distances to objects that are reflected in the mirror. In addition, the side mirror may additionally have a round convex insert, which further increases visibility. A convex, so-called panoramic mirror, which gives a wide-angle rear “picture”, also, however, distorted, can sometimes be installed in the cabin, which can adversely affect traffic safety.

In addition to the three main mirrors, cars can be equipped with auxiliary mirrors - outside rear, side for controlling the right size. Most often this applies to trucks, vans and minivans. Such mirrors are designed to help with maneuvering, reversing and parking.

In the 50s in America they found a new place for rear-view mirrors - the front fenders of a car. True, this design in the global automotive industry has not taken root.

In the overwhelming majority of cases, side mirrors are installed on the front doors of a car, but many motorists also remember another scheme for installing mirrors - on the front wings. This scheme was born in the 50s in the United States, but did not last long - the mirror adjustment was very inconvenient, and the car did not add to the aesthetics. There were pluses - the absence of the so-called "dead zones" and the presence of a mirror in the same field of view with the road.

Longest of all, this scheme remained true in Japan - models of the 80-90s with mirrors located on the wings still ride on our roads.

Modern exterior mirrors are high-tech products equipped with various electronic systems. By heating and electrically adjustable mirrors, few people are surprised. Now the mirrors can be independently adjusted for a specific driver (memory function), and automatically darken to prevent blindness of the driver, and warn about the presence of another car in the "dead zone" during rebuilding.

Despite the fact that in modern models video cameras are beginning to be used to get information about what is happening behind the car, the traditional mirror will be the most reliable and reliable means of rearview for a long time to come. Still, a person still trusts his eyes more than the most advanced electronics.

How and what do mirrors in a car regulate

The main task of adjusting the rear-view mirrors is to obtain the most complete and easy to read image, as well as minimizing the "dead zones". A “dead” or “blind” zone is a stretch of road near a car that cannot be seen with mirrors. The side mirrors were previously adjusted either manually outside the car (now such an anachronism as the hinged mirror adjustment mechanism remained, perhaps, only with the utilitarian Land Rover Defender), or with the help of levers from inside the passenger compartment.

On modern cars, the joystick is usually used, which allows you to conveniently control the mirrors using an electric drive. The most advanced adjustment systems adapt the position of the mirror depending on the driving mode (for example, when reversing).?