Everything for Motorists ... What is a Turbocharger ...

Undoubtedly, each of us at least once in his life noticed a “turbo” nameplate on an ordinary-looking car. Manufacturers, as on purpose, make these nameplates of small size and place them in inconspicuous places so that an uninitiated passerby will not notice and pass by. And an understanding person will certainly stop and be interested in a car. The following is a summary of the reasons for this behavior.

Automotive designers (since the birth of this profession) are constantly concerned about the problem of increasing the power of engines. The laws of physics say that engine power directly depends on the amount of fuel burned per one working cycle. The more fuel we burn, the more power. And, say, we wanted to increase the “number of horses” under the hood - how to do this? This is where the problems await us.

The turbocharger consists of two “snails” - exhaust gases pass through one, and the second “pumps” air into the cylinders. 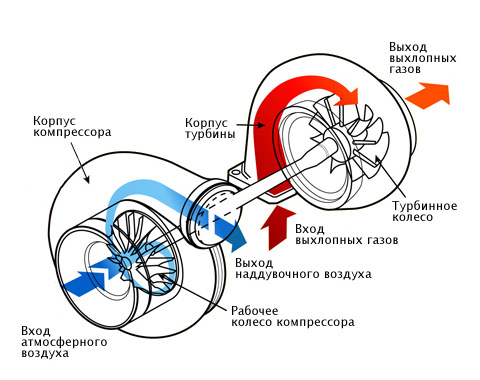 The fact is that oxygen is needed for fuel combustion. So in the cylinders is not burned fuel, but the fuel-air mixture. Mix fuel with air not by eye, but in a certain ratio. For example, for gasoline engines, 14-15 parts of air are relied on for one part of the fuel - depending on the operating mode, fuel composition and other factors.

As we can see, a lot of air is required. If we increase the fuel supply (this is not a problem), we will also have to significantly increase the air supply. Conventional engines suck it on their own because of the difference in pressure in the cylinder and in the atmosphere. The dependence is straightforward - the larger the volume of the cylinder, the more oxygen gets into it at each cycle. That’s what the Americans did, releasing huge engines with breathtaking fuel consumption. Is there a way to drive more air into the same volume? 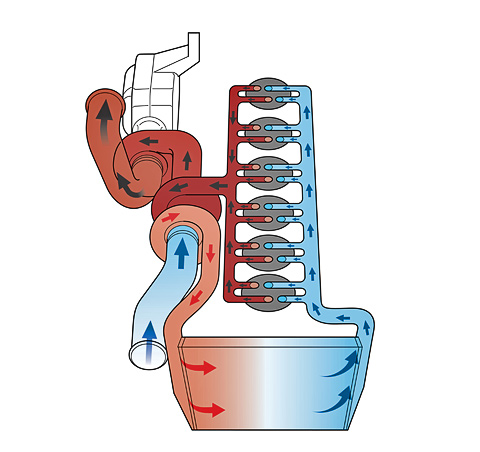 The exhaust gases from the engine rotate the turbine rotor, which, in turn, drives the compressor, which pumps the compressed air into the cylinders. Before this happens, the air passes through the intercooler and is cooled - so you can increase its density.

There is, and for the first time it was invented by Mr. Gottlieb Wilhelm Daimler (Gottlieb Wilhelm Daimler). Familiar surname? Still, it is she who is used in the name DaimlerChrysler. So, this German thought quite well in motors and back in 1885 he figured out how to drive more air into them. He guessed to pump air into the cylinders with the help of a supercharger, which was a fan (compressor), which received rotation directly from the engine shaft and drove compressed air into the cylinders.

Swiss inventor Alfred J. Büchi went even further. He led the development of diesel engines at Sulzer Brothers, and he strongly disliked that the engines were large and heavy, and developed little power. He also did not want to take energy from the “engine” in order to rotate the drive compressor. Therefore, in 1905, Mr. Buchi patented the world's first injection device, which used the energy of exhaust gases as a propulsion device. Simply put, he came up with a turbocharger. 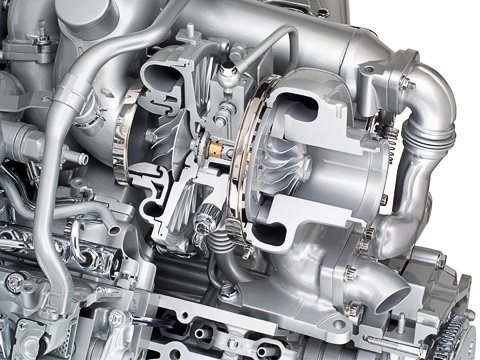 The idea of ​​a smart Swiss is simple, like all brilliant. As the winds rotate the wings of the mill, so do the exhaust gases spin the wheel with the blades. The only difference is that the wheel is very small, and there are a lot of blades. The wheel with blades is called the turbine rotor and is mounted on one shaft with the compressor wheel. So conditionally a turbocharger can be divided into two parts - a rotor and a compressor. The rotor receives rotation from the exhaust gases, and the compressor connected to it, working as a “fan”, pumps additional air into the cylinders. All this ingenious design is called a turbocharger (from the Latin words turbo - vortex and compressio - compression) or a turbocharger. 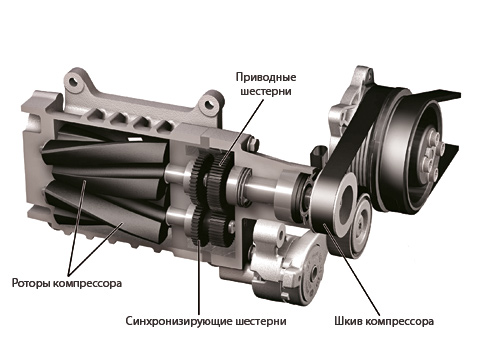 In a turbo engine, the air that enters the cylinders often has to be additionally cooled - then its pressure can be made higher by driving more oxygen into the cylinder. Indeed, it is easier to compress cold air (already in the engine cylinder) than hot.

The air passing through the turbine is heated by compression, as well as from parts of a turbocharger heated by exhaust gases. The air supplied to the engine is cooled using a so-called intercooler (intercooler). This is a radiator mounted on the air path from the compressor to the engine cylinders. Passing through it, he gives his heat to the atmosphere. A cold air is more dense - which means that it can be driven into the cylinder even more.

The more exhaust gases enter the turbine, the faster it rotates and the more additional air enters the cylinders, the higher the power. The effectiveness of this solution compared to, for example, a drive supercharger is that very little engine energy is spent on “self-maintenance” of the boost - only 1.5%. The fact is that the turbine rotor receives energy from the exhaust gases not due to their deceleration, but due to their cooling - after the turbine the exhaust gases continue to move quickly, but are colder. In addition, the gratuitous energy expended on air compression increases engine efficiency. And the ability to remove more power from a smaller working volume means less friction loss, less engine (and machine as a whole) weight. All this makes turbocharged cars more economical in comparison with their atmospheric counterparts of equal power. It would seem, here it is, happiness. But no, not so simple. The problems have just begun. 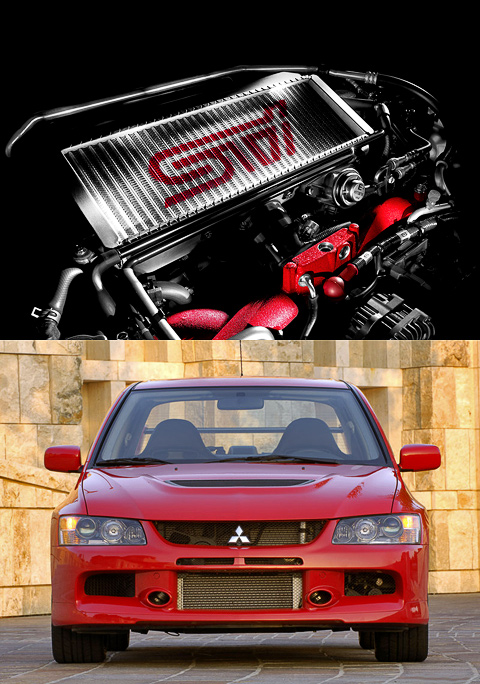 Firstly, the rotation speed of the turbine can reach 200 thousand revolutions per minute, secondly, the temperature of hot gases reaches, just try to imagine 1000 ° C! What does all this mean? It is very expensive and difficult to make a turbocharger that can withstand such weak loads for a long time. 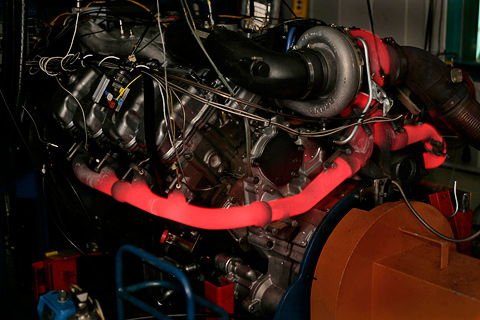 For these reasons, turbocharging was widespread only during the Second World War, and even then only in aviation. In the 50s, the American company Caterpillar was able to adapt it to its tractors, and craftsmen from Cummins designed the first turbodiesels for their trucks. On serial passenger cars, turbo engines appeared even later. This happened in 1962, when almost simultaneously saw the light of Oldsmobile Jetfire and Chevrolet Corvair Monza.

But the complexity and high cost of the design are not the only drawbacks. The fact is that the turbine's performance is highly dependent on engine speed. At low revolutions, there is little exhaust gas, the rotor spins slightly, and the compressor almost does not blow additional air into the cylinders. Therefore, it happens that up to three thousand revolutions per minute the motor does not pull at all, and only then, after four to five thousand, it “shoots”. This fly in the ointment is called turboyama. Moreover, the larger the turbine, the longer it will spin. Therefore, motors with very high specific power and high pressure turbines, as a rule, suffer from a turbojam in the first place. But for turbines that create low pressure, there are almost no draft failures, but they do not raise power very much either.

There are more sophisticated designs. For example, engineers came up with the idea of ​​installing not one but two turbines on a motor. One works at low engine speeds, creating traction on the “bottoms”, and the second is turned on later. This solution was called twin-turbo and allowed to kill two birds with one stone - both the turbojama and the problem of lack of power. At the end of the last century, cars with a serial turbine connection scheme had some popularity, they were produced by Nissan, Toyota, Mazda and even Porsche. However, due to the complexity of the design of the eyelids of such devices, it was short-lived, and other ideas became widespread.

For example, parallel turbocharging, or biturbo. That is, instead of one turbine, two small identical turbines are installed, which operate independently of each other. The idea is this: the smaller the turbine, the faster it spins, the more “responsive” the engine is. As a rule, two small turbines were placed on V-engines, one for each half.

Another option is turbines with two "snails", or twin-scroll. One of them (slightly larger) receives exhaust gases from one half of the engine cylinders, the second (slightly smaller) - from the second half of the cylinders. Both supply gases to one turbine, effectively spinning it at both low and high speeds. 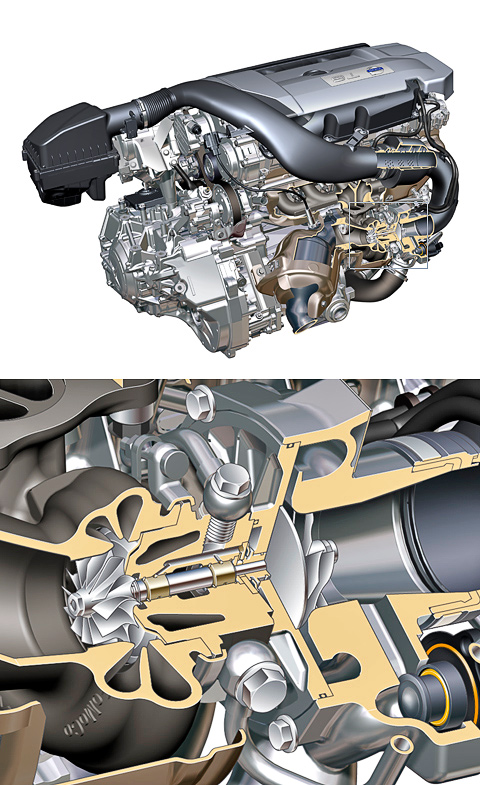 But the designers did not calm down on this either. Naturally, than fencing two turbines, it is much easier to manage one. It is only necessary to make the turbine work equally effectively over the entire rev range. So there were turbines with variable geometry. Here the fun begins. Depending on the speed, special blades are rotated and the shape of the nozzle varies. The result is a “super turbine” that works well across the entire rev range. These ideas have been in the air for decades, but they have been able to realize them relatively recently. Moreover, turbines with variable geometry first appeared on diesel engines, fortunately, the gas temperature there is much lower. And of gasoline cars, the first tried on a Porsche 911 Turbo. 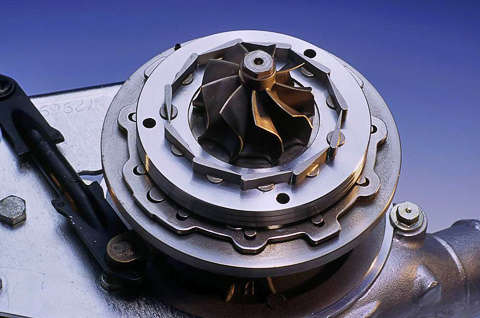 The design of turbo engines has been brought to mind for a long time, and recently their popularity has increased dramatically. Moreover, turbochargers turned out to be promising not only in the sense of boosting engines, but also in terms of improving the efficiency and purity of the exhaust. This is especially true for diesel engines. Rare diesel today does not carry the prefix "turbo". Well, installing a turbine on gasoline engines allows you to turn an ordinary-looking car into a real "lighter". The one with a small, barely noticeable nameplate "turbo".

The general horoscope for October 22

The first half of this day can bring frequent changes in circumstances and situations, as well as frequent changes in your mood. It is not worth building hard plans for this period. The afternoon is more favorable. At this time, luck awaits people who are direct, honest, initiative. Show courage and energy more often to succeed.

A good day for buying fashion accessories, quality cosmetics. Successful will also be the purchase of goods for men: razors, men's clothing, items for sports, outdoor activities. You can successfully spend money on the purchase of medicines, quality alcohol