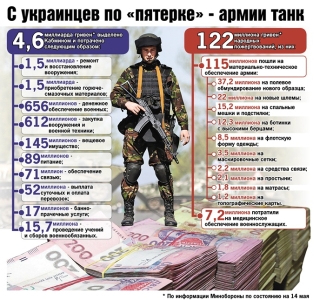 The Ministry of Defense reported on what it spent 4.6 billion hryvnia.

Recent events in the Crimea, riots in the southeast forced politicians to reconsider the state policy regarding the armed forces. The army decided to allocate more money and financial flows flowed into the Ministry of Defense. But they did not turn into a waterfall.

The defense ministry has already received 4.6 billion hryvnia from the government, and 122 million from the Ukrainians as part of the army's assistance program, "the representative of the Defense Ministry reported to the Verkhovna Rada.

Where did the money that the Ukrainians donate to the army go? 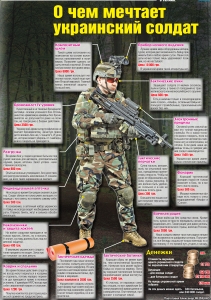 The publication turned to specialists to find out what ammunition our military does not have and how much it will cost.

Ukrainians continue to drop the whole world into the army, listing 5 UAH each. Throw money and officials, distributing budgetary funds.

Despite this, the Ukrainian military continue to complain about the poor equipment of the army and the banal lack of necessary ammunition. We communicated with the former military and Ukrainian peacekeepers, who know about the war firsthand.

What does the Ukrainian soldier dream about? 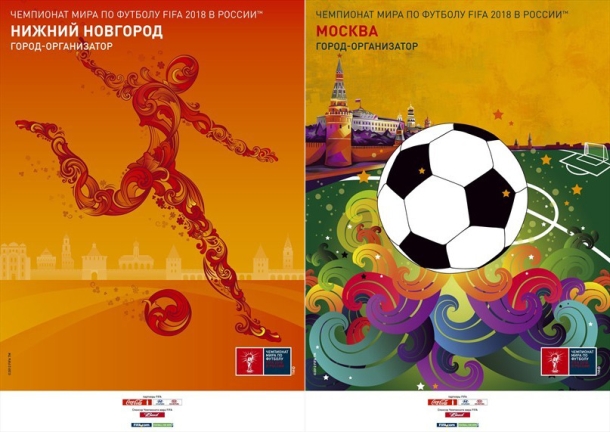 The scandal with bribes during the voting in Russia and Qatar for the World Cup championships in 2018 and 2022 is gaining momentum.

This is reported by the British newspaper Daily Star, informs the Chief.

According to the publication, FIFA is going to hold new elections of host countries Mundialey. The reason for this was a scandal with the bribery of votes from the Qatar application and some problems of Russia with preparations for the holding.

Together with Russia for the World Cup-2018 also claimed the British and joint applications of Spain with Portugal and Holland with Belgium. The greatest number of chances to win re-elections from England.

Recall that earlier many Ukrainian and world politicians said that FIFA should take the World Cup from Russia because of the aggressive policy towards Ukraine.

Official Posters of the Cities-Organizers Chm-2018 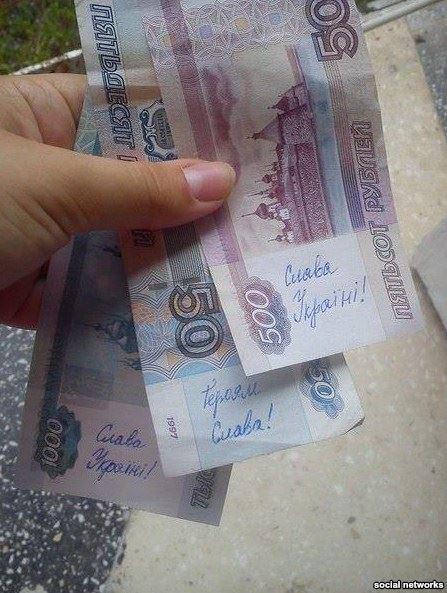 In the annexed Crimea appeared Russian rubles with the inscriptions "Glory to Ukraine! Heroes Glory!".

The photos on which such bills are depicted were posted by users of one of the social networks. Where exactly in the Crimea were received similar rubles, is not reported, reports Krym.Realii.

Recall, in the annexed Kerch refusal of the hryvnia sellers and buyers is given with difficulty. In stores and supermarkets now can not give change to Ukrainian trifle, and there is still no stock of Russian trifles on the peninsula. Sellers try to shift the solution of the problem to buyers, requiring them to pay for the calculation, or offering to buy goods for a round sum. In turn, buyers scandal with the sellers, demanding to give change to Russian trifles.

Many buyers have to give up part of the purchases in order to bring the total of their costs closer to a round sum.

UPD: 03/06/2014 Servicemen in Slavyansk call their positions "Sparta" and fight knee-deep in the water. VIDEO

The intensity of shelling of Ukrainian roadblocks is constantly growing.

In Slavyansk, terrorists are trying to break through the Ukrainian posts. The intensity of attacks is growing, because the ring narrows. However, all attempts by militants to escape from the city are exposed to the fire of an anti-terrorist operation, TSN reports.

The tactics of the militants are the tactics of the partisans. From the neighboring village, local positions are firing at positions from the underbarrel grenade launchers and immediately escape. Terrorists distract attention, and then begin to work as mortars.

Ukrainian servicemen call their outpost "Sparta", and they reflect all attacks. There is no panic among the soldiers. All of them knew where to go, and none of the defenders advanced refused. Despite the fact that they are fighting in the water, because after the rain all the points are flooded to the knee, the guys from the National Guard and the military do not lose their morale.

Recall May 31 from Slavyansk returned the first reserve battalion of the National Guard of Ukraine, formed from Maidanov. He was succeeded by the second battalion of guardsmen.