Recent developments for the current month 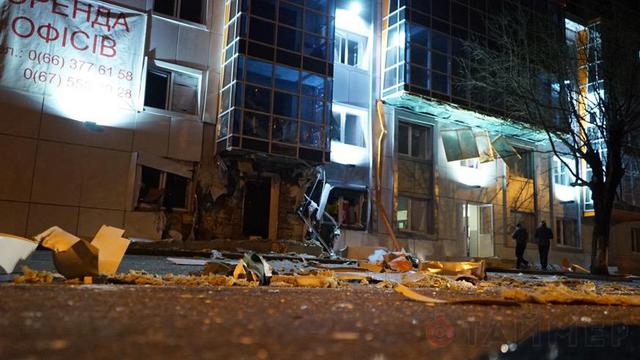 Today in Odessa unknown blew up a business center, which was located on the street Krasnov not far from the building of the Odessa prison.

According to reports in the social media explosion has destroyed part of the building, where the volunteer center troops ATO aid, which was in charge of one of the Maidan organizations.

The information that was blown up by a volunteer point confirmed on his Facebook page Odessa volunteer Dahlia Severin.

The thunder was very strong. He heard residents Tairov, Cheryomushki, Fontana, and some Moldavian areas Slobodka and the city center.

On-site work by police officers and rescue workers, sealed off the scene of the accident. According to preliminary data, no victims. The network published the first photos of the incident.

The GU MVD in the Odessa region edition UEFA confirmed the explosion. "Yes, there was an explosion, there were no injuries Then workers (police) inspect.", - The law enforcement agencies.

In Odessa, a powerful explosion

Commenting, keep in mind that the content and the tone of your messages can hurt the feelings of real people, show respect and tolerance to his interlocutors, even if you do not share their opinion, your behavior in terms of freedom of speech and anonymity offered by the Internet, is changing not only virtual, but real world. All comments are hidden from the index, spam control.
A COMPLAINT
loading...

March 5: Good day to act according to a predetermined plan, to carry out his plan earlier. At the same time likely internal doubt throughout the day. Communication can be folded too emotional. Fear is deception, care should be taken during short trips. Find a time and in order to do something nice for you to have fun.
March 6: This is a good day to be creative, use a non-standard decisions, take the initiative. The day will bring more optimism and enthusiasm. At the same time it is not necessary today to address the formal questions, it is important to avoid carelessness.
March 7: The day will bring a relaxed mood, enhance creative inspiration. Avoid laziness and self-indulgent. The evening is better to spend, surrounded by family, close friends, it will raise the mood, allow you to feel confident.