UPD: 13/10/2014 "Okulturila with tits at the ready": "The Minister of Culture" ЛНР "demands to shoot the writer Karp for the cartoon" Vatnitsa-mutant. "PHOTO report + VIDEO 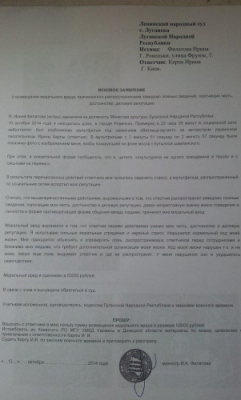 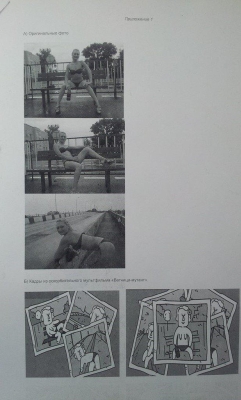 "The Minister of Culture" LNR "Irina Filatova filed a" statement of claim "with the demand" to judge Karp II. According to the laws of wartime and sentence to execution. "

The reason for the announcement was a cartoon film "Vatnitsa-mutant" - a joint project of Ukrainian writer Irene Karpa and "Details."

"The Minister of the People's Republic of Finland" asserts that in the cartoon her nude photos were shown against the background of the bridge with a bottle of champagne.

In addition to shooting Filatov requires to collect from Irena Karpa a fine of 50,000 rubles for moral damage.

"In the cartoon ... there was a picture of me pretending to be posing against the background of a bridge with a bottle of champagne, while in humiliating form it was reported that I had not incubated one citizen in shorts and with boobs at the ready," the appeal said.

Also, Minister Filatova notes that after watching the cartoon she "had a dream and her health worsened."

UPD: 13/10/2014 "I was taken to the Bandera.Please send Mein Kampf, or else they will scatter us, well, you all know yourself," is a parody of a Ukrainian letter to relatives from Russia. VIDEO

The artists of "Studios Kvartal 95" ridiculed the opinion of many Russians about the situation in Ukraine and the involvement of Russia in the events in the Donbass.

The program of the concert "Quarter" was a miniature in which a resident of Ukraine wrote a letter to his Russian relatives. 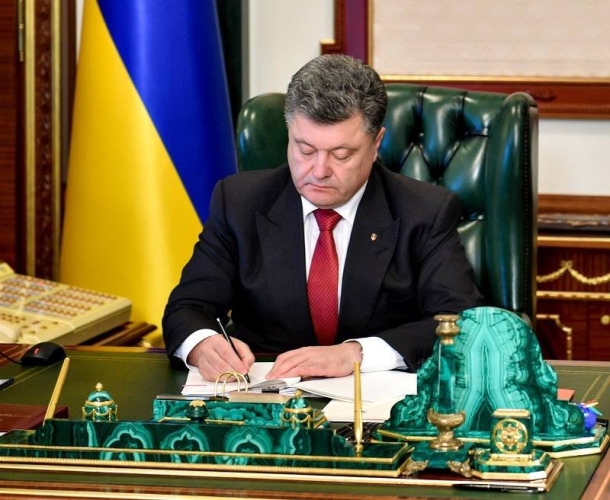 Compare the jobs of Merkel, Obama, Olland, Putin and Poroshenko

Merkel and Obama's offices are most advantageous.

The French president probably wants to feel like Louis the 14th, while Poroshenko and Putin still live in a scoop, as evidenced by the same type of Malachite sets, massive armchairs and gilding on furniture.

You need to be more modest, take an example from the FRG and the USA.

At home, you can put a golden throne, for your money, of course, and taxpayers should NOT pay for this ostentatious and unjustifiable luxury! 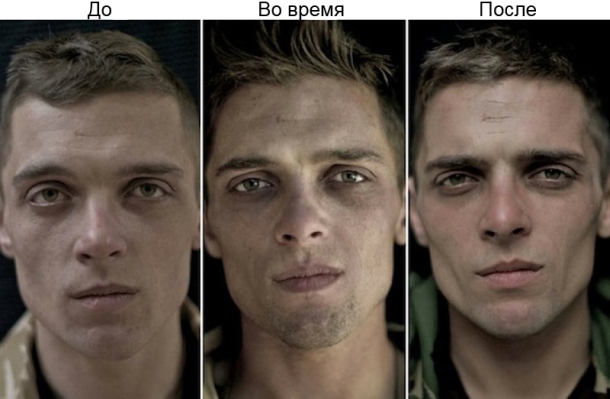 Staying for a long time in Afghanistan, the photographer Layledge Snow decided to implement a very interesting and extraordinary project "We are not dead".

He wanted to show what a trace of the war left on the faces and souls of people. In their glance it is easy to read all the horror that they had to go through. The war leaves not only physical, but also deep psychological and moral wounds.

Each photo consists of three parts: before, during and after the war.

In the eyes of the soldiers who passed the war, you can see everything: fear, hatred, horror, sadness, homesickness and joy from the long-awaited meeting with those who waited for them.

You will be amazed to see these changes!

Unique photos of soldiers before and after the war

UPD: 13/10/2014 TSN got inside Donetsk airport and filmed a unique video of the battle of "cyborgs" 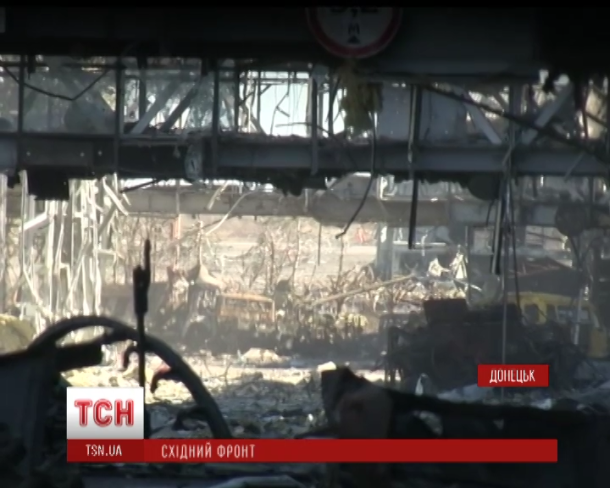 TSN correspondent Alexander Zagorodny managed to get inside the airport, and show exclusive footage of what's left of the building.

The main news for this moment is our airport and it continues to be held by the Ukrainian military, despite the fact that they are being fired at every hour.

Only in half a day our soldiers repulsed two attacks of separatists. The militants even managed to set fire to the terminal, there was very acrid smoke, the guys were literally choking, because they could not leave the room, because snipers shoot everything around.

Getting to the airport is now extremely difficult. The whole runway is shot through by large-caliber machine guns, but the fighters of the 95th airborne brigade in Cossack assault on the BMP, and the "Right Sector" in general on UAZ rushed all the way across the runway. Obviously, the terrorists simply did not expect this.

Only UAZ stopped near the terminal, it was immediately blown up, the guys managed to jump out, but all the products they were transporting to our fighters were burned ...

Inside the Donetsk airport - fight "cyborgs"

UPD: 13/10/2014 Despite the calls for a boycott of Russia, the Formula 1 stage was held in Sochi. Medvedchuk flew at him to the kum. A PHOTO 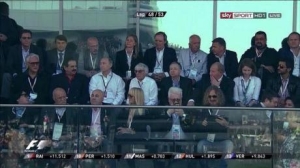 In Sochi, the first in the history of the Russian stage of the World Championship in car racing in the class of cars "Formula-1."

This is reported Radyo Liberty. The competition was attended by both Russian leaders - President Vladimir Putin and Prime Minister Dmitry Medvedev. Earlier in the West, calls were made for the cancellation of the Sochi stage of the competition for Russia's role in the crisis in eastern Ukraine, but the head of Formula 1 Briton Bernie Ecclestone said that the Russian stage will take place, and the International Federation of Motorsport (FIA) urged not to mix sport and politics.

The cost of objects built in Sochi for the reception of the competition "Formula 1", estimated at almost 16 billion rubles (at the current rate is about 400 million dollars). At the opening of the competition in the box next to the president of the Russian Federation, his comrade Viktor Medvedchuk was also seen. He was sitting next to the Hollywood "star" - Stephen Sigal, who had previously welcomed the local population in the Crimea with "reunification with Russia." Earlier, Censor.NET reported that Merkel canceled the meeting with Putin in Sochi. 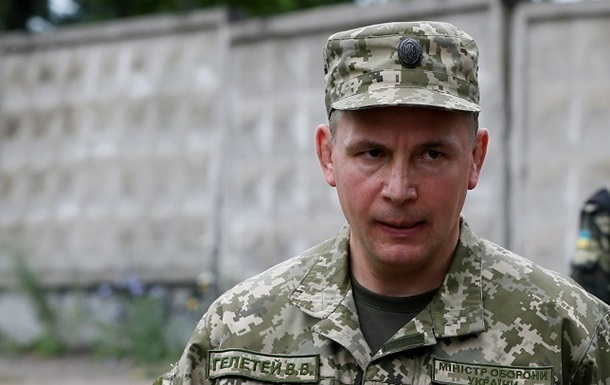 President of Ukraine Petro Poroshenko dismissed from the post of Minister of Defense Valery Geletay.

As the press service of the President of Ukraine.

"The head of state satisfied the report of the defense minister on his resignation and on Monday will submit a proposal to the parliament on the appointment of a new head of the Defense Ministry," the statement said.

The president stressed that it was time to change the leadership of the military department. He also expressed the hope that his proposal will be supported on October 14 at the session of the Verkhovna Rada.

"I am sure that we will not be dragging the ballot for the candidature of the new minister, I expect that it will happen on Tuesday," Poroshenko noted.

According to the President of Ukraine, the decision to replace the head of the Defense Ministry and a number of other personnel decisions, in particular, the dismissal of the leadership of the State Border Service and the creation of the Committee on Intelligence and the appointment of its chairman Igor Smeshko, will seriously strengthen the security structures and strengthen the defense capability of Ukraine. 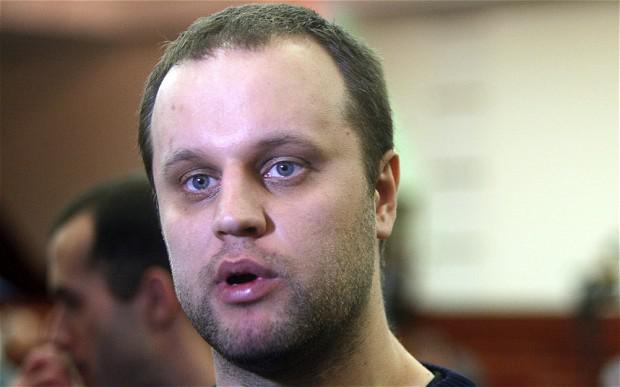 On the night of October 13, in the Donetsk region, unknown people shot a car of one of the leaders of the terrorist group of the Dnepropetrovsk region, Pavel Gubarev.

This is reported by "New time".

After the bombardment, Gubarev's car crashed into a pillar.

Russian media claim that at the moment Pavel Gubarev is in serious condition in one of the hospitals in Rostov-on-Don.

As reported by RIA Novosti referring to Gubarev's associate Miroslav Rudenko, people who accompanied the former "people's governor" of Donbass were not injured as a result of the shelling of his car.

"Pavel was returning from the Rostov region when his car was fired upon by unknown people in the territory of the Dnieper." Having lost control, the car crashed into a tree, "Rudenko said.

Recall, Gubarev proclaimed himself the leader of the DRN militia during the riots in Donetsk in March 2014. For some time Gubarev was kept by Ukrainian security forces, but in May he was exchanged and returned to terrorists.