UPD: 18/01/2014 The Ukrainian official seized the DAI backbone for trips with friends in the lazne 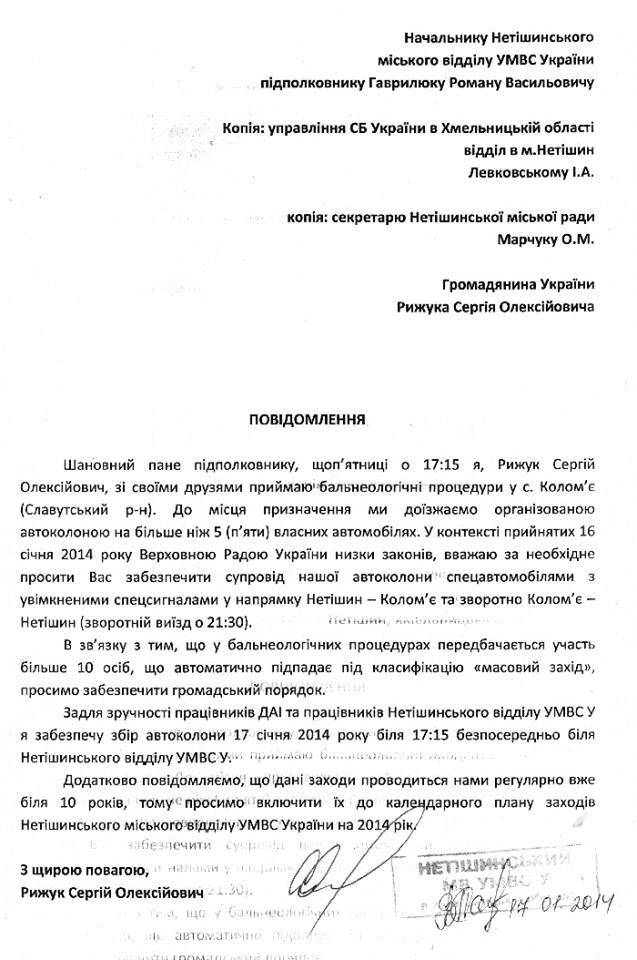 Cholovik povodiv, scho in the colony zberyatsya bolshe 5 cars, and zibrani in the 10 grooms of the acquaintances to become a "masovy zahid", but need to take care of the order.

Meshkanets Khmelnitsky Oblast zvernnutsya to zakorotorontsev z vimogoyu zabezpechiti dotrymannya novih legitiv na praktitsi. Cholovik writing to the application before the ministry, in which, after reading about the council, they were summoned by friends at the lazi and asking the MVS to have a strong order to protect themselves with a huge order.

Povіdomlenia is addressed to the head of the Netisinsky Moscow Exhibition of the MVS, Colonel-General Roman Gavrilyuk. Copies are transferred to the office of the Security Service of the SB of the USSR.

"After 20-30 hvilin calling on the mob's militant intercessor of the head of the militia." Spotting up, sending us for the subway in the lacunae of the small helicopter with the crocheting lobes, having come down to the pier, trying to hold it, pardon, pardon it, try to do it, it's pathetic. "

If you have an appointment for an hour, the participants of the car colony have been beaten by the Ministry of Foreign Affairs, they have visibly imparted money to the subordinates. 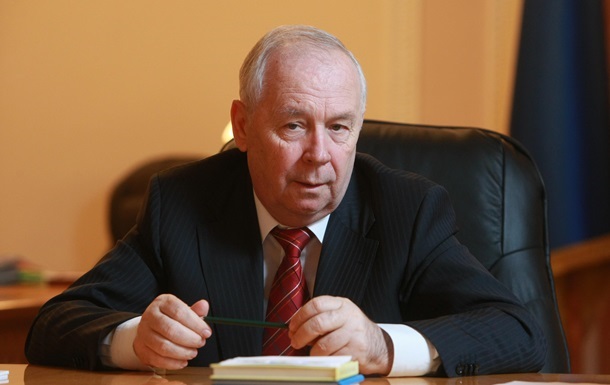 "Thus Article 130, paragraph 2 provides that" The Head of the Verkhovna Rada shall sign the law submitted for signature not earlier than two and not later than five days from the date of its submission, except in cases stipulated by this regulation, "the document says. 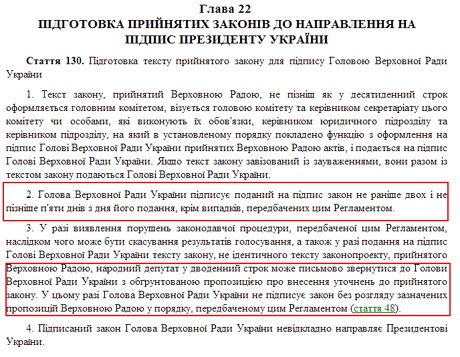 In addition, according to the publication, another rule, specified in paragraph 3 of article 130 of the regulations, has been violated.

According to this norm, a people's deputy can appeal to the head of the Verkhovna Rada of Ukraine in a two-day period with a justified proposal on introducing clarifications to the adopted law.

Fisherman's violation of the two norms of the legislative act was confirmed by the Ukrainian MP from the Fatherland Pavel Petrenko.

"Yes, the speaker violated two norms of the regulation: on the one hand, about two days before the expiry of which he had no right to sign the law, and the second rule concerns that we immediately submitted applications and draft resolutions on each of the laws," Petrenko said. 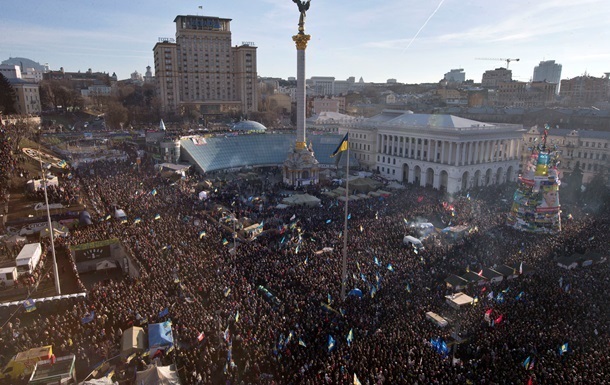 More than a hundred public organizations declare full mobilization on Independence Square in Kiev and urge Ukrainians not to recognize the "laws" of Yanukovych.

The impetus for this statement was the situation in the country and the adoption on January 16 of antisocial laws that "impose a dictatorship."

"Only mass and immediate resistance of the people can stop criminals and protect people from mass repression.It's time for everyone to defend their freedom, their families, their country," the appeal says.

The authors of the appeal support the decision to hold a people's assembly on Sunday, January 19. "With this Veche we will begin the restoration of the constitutional system." The dictatorship will be put to rest, these days are decisive. "

"Wherever you live, go to Kiev, call with you all and stay. Kiev, Raise your neighbors, colleagues and relatives, and go to Maidan," the authors write.

Residents of Kiev are asked to help compatriots from other cities with an overnight stay and food. "Wherever you work, do not follow the illegal orders of the authorities, do not accept the" laws "of Yanukovich and join the all-Ukrainian resistance to dictatorship."

Under the statement, more than 100 public and civic organizations have already signed. As reported, the opposition is calling a new veche on January 19 and is preparing for a strike.