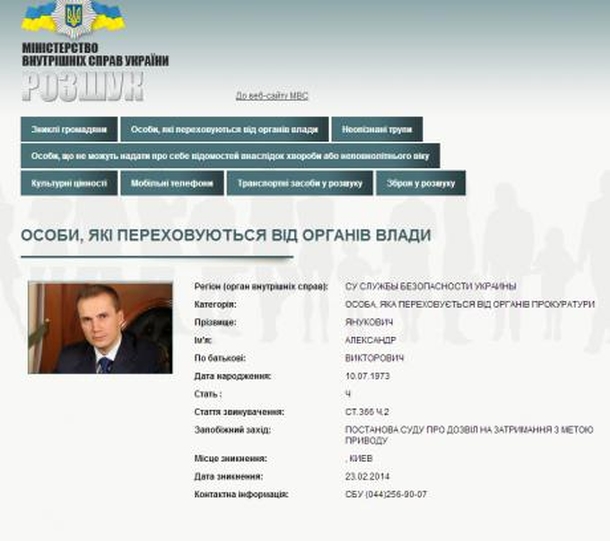 The eldest son of ex-president of Ukraine Viktor Yanukovych Alexander is on the wanted list.

Information about him appeared in the section "Individuals, like crossing over organs of authority" on the website of the Ministry of Internal Affairs.

According to the search card, Alexander Yanukovych was put on the wanted list by the Security Service of Ukraine. He is charged with committing a crime under subsection 366 (2) of the Criminal Code - forgery, forgery of documents, as well as the preparation and issuance of deliberately false documents, which entailed serious consequences.

UPD: 04/18/2014 "Hand over the separatist." An anti-terrorism commercial has appeared on the Internet. VIDEO

The initiative to change weapons and terrorists for money was the reason for shooting a special commercial. Video advertising has already appeared on the Internet.

UPD: 04/18/2014 Naumenko: The elimination of the "Kurchenko schemes" increased the import of gasoline by 83% 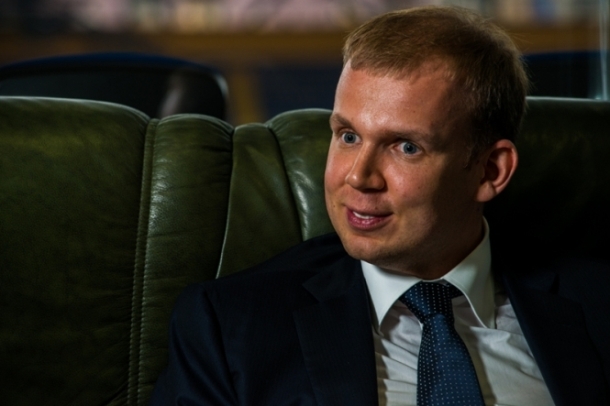 Zp account of the destruction of shadow schemes, the growth of customs payments amounted to, compared with March, 550 million UAH.

This was announced by Deputy Minister of Revenue and Duties of Ukraine Vitaliy Naumenko on Thursday at a press conference in Kiev, according to Censor.NET with reference to Ukrinform.

“Kurchenko’s schemes were broken. And in March, compared with February, the official import of petroleum products increased. In particular, gasoline imports increased by 83%, diesel fuel - by 60.9%, ”said Naumenko.

According to him, only in April, the growth of customs payments amounted to UAH 550 million compared to March. At the same time, Naumenko emphasized that this was achieved not due to the overpricing of goods at customs, but due to the destruction of shadow schemes.

In addition, the growth of the dollar, according to Naumenko, does not affect the performance of customs payments to the budget.

UPD: 04/18/2014 Russia is a wasteland, and the demographic problems there are enormous. For them, the ideal option is simply to destroy Ukraine, - political analyst 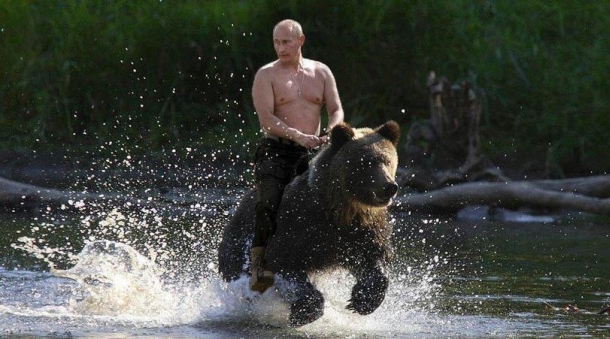 Despite the presence of the largest territory in the world, Russia is still at a low level of development. According to the broadcast of the BTB channel, political analyst Alexander Paliy said.

“And some of our leaders of the famous party play along with this. After all, they want to continue to remain in control of those oppressed people and resources. For Russia, the ideal option is simply to destroy Ukraine, and even better - the whole world. Why this is needed is unknown. This, you know, the Mongol-Tatars had such a slogan: "To the last sea!". And the Russians embraced this ideology. There is no rational explanation for this - this is in psychology. That is, these gains do not give the development of Russia. Look at modern Russia. This is the largest territory in the world, and you understand what level of development there is, ”said Paly.

“The Russians cannot dispose of what they have. And there are territories where you can go for a week and not see a single living person. This is a wasteland in many ways. And, by the way, the aggression against Ukraine is largely due to the fact that Russia is a wasteland, and the demographic problems there are enormous. They want to send Ukrainians to Siberia so that they build up barriers against the Chinese there. They want to eat our blood - that's what it's called simple words. To get drunk on our blood and refresh ourselves economically, politically, demographically, etc., ”concluded the political scientist. 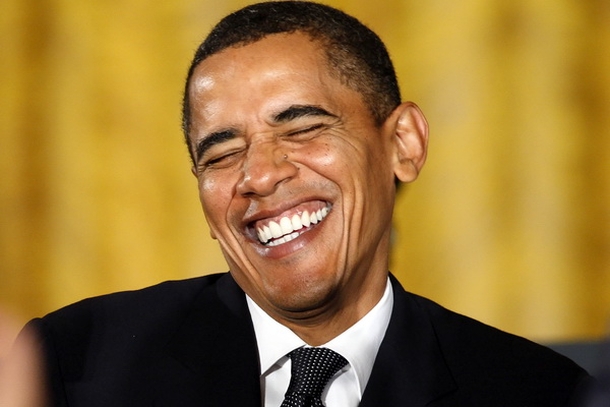 The agreement reached at the quadripartite negotiations in Geneva on the crisis in Ukraine offers the prospect of de-escalation of tension in this country. This was stated by US President Barack Obama

He said that the question now is whether Russia will use its influence “to undermine” efforts to restore order in Ukraine.

Obama added that he is discussing with the Allies the following sanctions against Russia if there is no progress in the development of the situation.

The US President claims that, given Russia's previous actions, he is skeptical.

Obama in the White House commented on the results of the quadripartite meeting of the heads of the foreign affairs agencies of Ukraine, the USA, the European Union and Russia.

In a Geneva statement, the parties noted that administrative buildings illegally seized in Ukraine should be vacated and returned to their rightful owners. The parties also decided to expand the mandate of the OSCE observers already in Ukraine - now they will not only evaluate preparations for the May 25 elections, but will also help the Ukrainian authorities and local communities to de-escalate the situation. 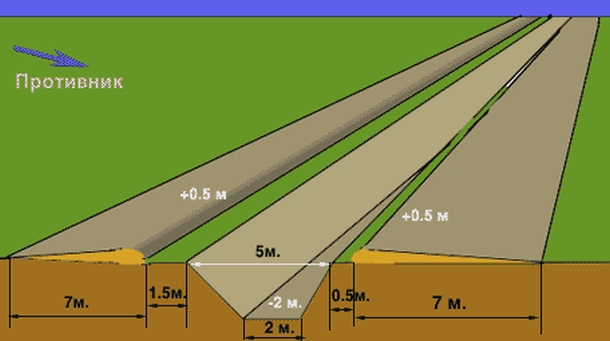 In the Sumy region dig a ditch for the entire length of the border with Russia.

This was stated by the head of the Sumy Regional State Administration Vladimir Shulga, reports Censor.NET with reference to Ukrinform. "Now we have already dug about 20 kilometers of such a ditch 4 meters wide and 2 meters deep," said Shulga. According to him, this is done so that heavy military equipment from Russia could not get into Ukraine, as well as to prevent smugglers from getting into Sumy. Earlier, Censor.NET reported that Ukraine was ready to completely close the border with Russia.

UPD: 04/18/2014 Geneva Accords: full text of the resolution on the basis of quadripartite negotiations 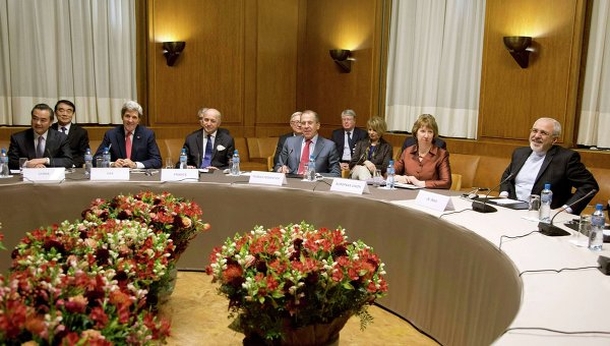 The parties agreed on the release of administrative buildings, abstinence from violence, de-escalation of the conflict and constitutional reform

At the Geneva meeting on the situation in Ukraine, the parties agreed on initial concrete steps to de-escalate tensions and restore security for all citizens. This is stated in the text of the resolution following the results of today's meeting of the heads of diplomatic missions of the USA, EU, Ukraine and Russia, published on the website of the Ukrainian Foreign Ministry, LigaBusinessInform reports.

The text of the resolution following the meeting in Geneva also notes:

“All parties must refrain from any violence, intimidation or provocative actions. Participants strongly condemned and rejected all manifestations of extremism, racism and religious intolerance, including anti-Semitism.

Amnesty will be granted to protesters and those who have left buildings, other public places and surrendered weapons, with the exception of those found guilty of crimes.

It was decided that the OSCE Special Observer Mission should play a leading role in assisting the Ukrainian authorities and local communities in the direct implementation of these de-escalation measures where they are most needed. The US, EU, and Russia are committed to supporting this mission, including by providing observers.

The beginning of the constitutional process, transparent and accountable, was announced. It will include the immediate creation of a broad national dialogue, covering all regions of Ukraine and political constituencies, the creation of conditions for the consideration of public comments and proposed amendments.

Participants emphasized the importance of economic and financial stability in Ukraine and will be ready to discuss additional support when the above steps are implemented. "

Recall that consultations in the format of the heads of foreign affairs agencies began today at 12:00 Kyiv time. It was originally planned that the discussion of the crisis in Ukraine would last about two hours, after which it would switch to a working lunch mode. However, the negotiations dragged on for more than seven hours. The delegation of Ukraine at the talks is led by Foreign Minister Andrei Deshchitsa.

The general horoscope for February 24

The day is favorable for the purchase of gold jewelry, personal goods. You can successfully spend money on the purchase of household tools: knives, scissors, hammers, goods for men: razors, men's clothing
Unlucky day for the acquisition of stylish clothes, fashion accessories