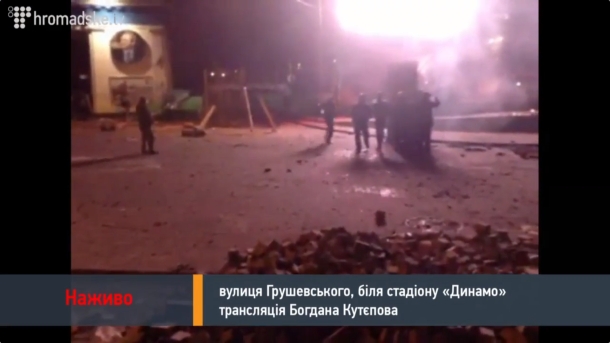 To burn the fourth Mentovsky bus and the headquarters of the Urals.

One man tore off his hand with a hand grenade .

From the side of the parent park are BTRs.

As it turned out, the water cannons purchased under opaque tender procedures were found to be defective, so they can not cope with the dispersal of the protesters. "Do you know why the water cannons do not reach the protesters though, as the militiamen say, they have to beat much further? They also bought through the tender procedures." Surprisingly, they generally exist ... ", the oppositionist wrote. "Water cannons on the Maidan are not sprayed where necessary because they were bought through shadow tenders under the euro 2012. Corruption is level 99," activists write in social networks.

UPD: 19/01/201 The loss on the side of the Golden Eagle. They were hospitalized, - the Ministry of Internal Affairs.

Earlier in the evening, a "golden eagle" was pulled out of the police cordon. Now the "Berkutov" is hospitalized. However, literally half an hour ago two more "Eagles" who lagged behind their detachment during the unsuccessful sortie of the "siloviki" were also detained by the demonstrators. They were also taken away by an ambulance.

According to the police officer, he was beaten on the way to the Trade Union House and inside the building.

After the release, the "Berkutovtsy" was sent to a departmental hospital. The doctors previously stated that he had a closed craniocerebral injury, fractures of the ribs and nose, a shock condition.

However, literally half an hour ago two more "Eagles" who lagged behind their detachment during the unsuccessful sortie of the "siloviki" were also detained by the demonstrators. They were also taken away by an ambulance.

"Near the Dynamo Stadium, two" Berkut "men stand between the bus and the stadium, covering themselves with shields, pavers regularly fly in them, they beat with sticks, and two protestants just grabbed the Lobanovsky stadium, they tried to beat it, but then they took them to the ambulance, which them and Took away, "- wrote the journalist Dmitry Gnap. 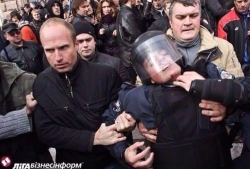 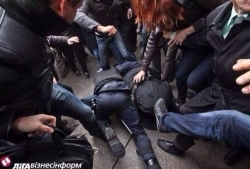 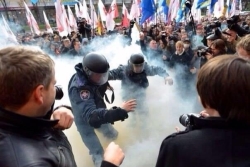 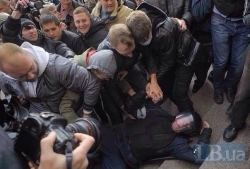 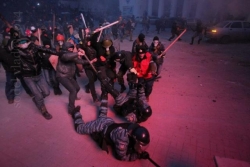 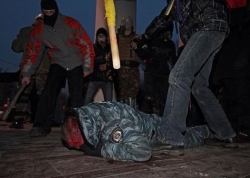 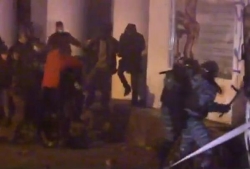 UPD: 19/01/201 Police tried to disperse the demonstrators with a water cannon: the ambulance took a dozen wounded. 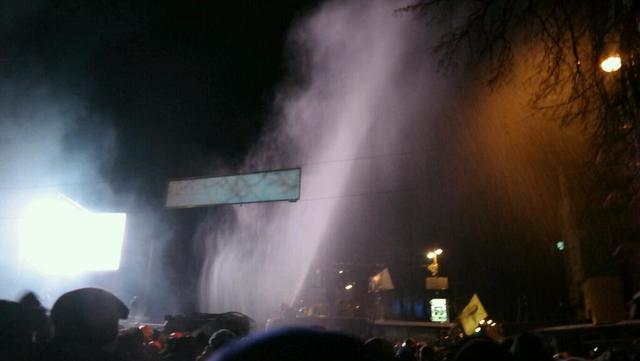 UPD: 23:50 As it turned out, water cannons purchased under opaque tender procedures were found to be defective, so they can not cope with the dispersal of the protesters. "Do you know why the water cannons do not reach the protesters though, as the militiamen say, they have to beat much further? They also bought through the tender procedures." Surprisingly, they generally exist ... ", the oppositionist wrote. "Water cannons on the Maidan are not sprayed where necessary because they were bought through shadow tenders under the euro 2012. Corruption is level 99," activists write in social networks.

The police tried to disperse the demonstrators with a water cannon. People at a temperature of -7 degrees watered. At the same time, immediately followed by a massive attack of light and gas grenades.

The police used a water cannon against the demonstrators on Grushevsky Street. However, the jet did not do very much harm to people. Most of them retreated, the water did not reach them. The demonstrators are not going to leave the confrontation. They shout "Baptism!". Water from a water jet was not watered for long. The use of water cannons in sub-zero temperatures is prohibited by the international convention. Under the law of Ukraine, the law enforcement authorities are prohibited from using water cannons, if the temperature on the street is below +5 and now -7.

The water jet was followed by a massive attack of noise and light grenades. Now the siloviki continue to fly noise grenades. Demonstrators respond with firecrackers. Several fights with law enforcers began.

The Ministry of Internal Affairs is already opening criminal cases for mass riots. Sanctions - up to 15 years in prison. 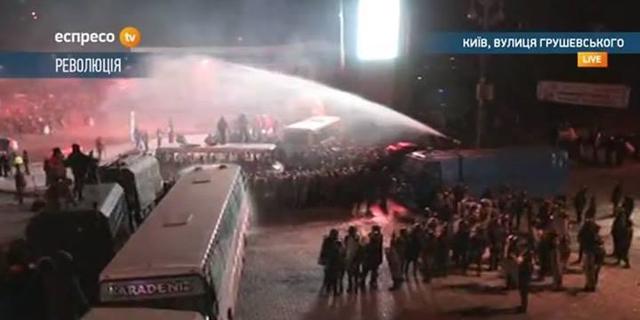 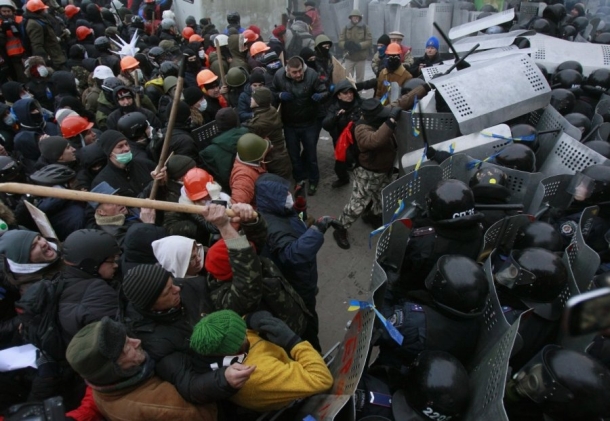 The ambulance took the boy from the Hrushevsky street with a foot, damaged from the rupture of a noise grenade. He has a lacerated wound.

Also, medical teams block communication with other groups, they can not get to the drugs. You need bandages and thermal water. The maximum repost!

At the same time, it is reported from four people affected by the grenade explosion. At least one of them has a head wound.

In addition, two journalists fell from the bus during the explosion of a grenade. What damage they have, so far it is not clear.

Note that the epicenter of events is located at the stadium "Dynamo". Activists break the bars out of the fence of the stadium for self-defense. "Berkut" is preparing to storm the assembled. The siloviki drove the water cannon. 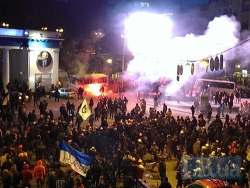 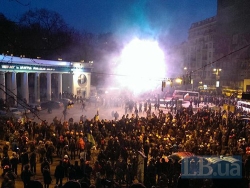 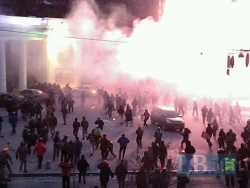 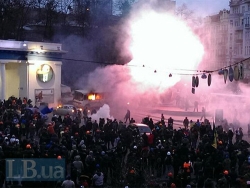 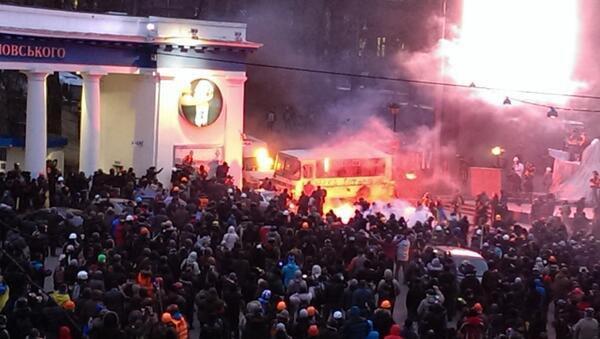 The demonstrators set fire to one of the buses of the siloviki, who are barred from the passage to the parliament along Hrushevsky Street, informs Censor NO referring to the LB.

"Berkut", which is behind the backs of soldiers of the Internal Troops, is preparing for dispersal.

"Berkut" received an order to detain people: They will tear out 2-3 people and pack in paddy wagons, - Orobets

The soldiers of the "Golden Eagle" received from the leadership order to detain people. This is written on his page in the social network Facebook people's deputy Lesya Orobets, who is currently on the street. Grushevsky, informs Censor NO.

"The golden eagle received an order to pick up 2-3 people and pack it in a car waggon." At the request not to carry out obviously criminal orders and not to fight with their people, they turn their faces away. "The bravest say, this is for American money," Orobets writes. 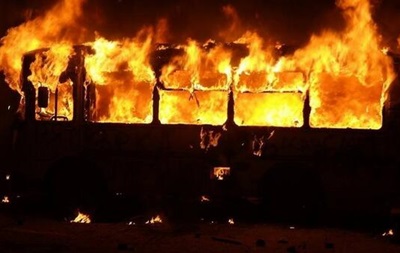 At the moment, the police clear the place for him. The protesters do not diverge, about ten people are trying to block the passage of the water cannon, pushing the damaged bus.

Also, the protesters continue throwing stones at the policemen. In turn, the police responds with gas attacks.

At the moment, people are chanting "From time to time!" And "Garbage". The opposition appeals to the militia to go over to the side of the people.

"Those who hate you at once, there's a lot of trouble," Klitschko said, zvertayuchits before the mass media. On the bench, shouting yomu "Ganba!" That they were accustomed to the comments of the letter from Grushevsky. 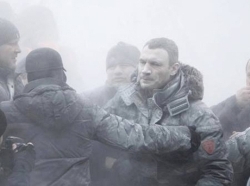 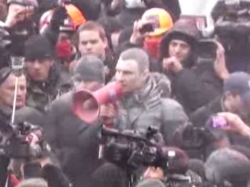 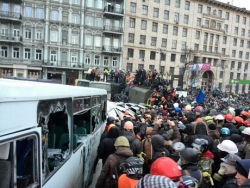 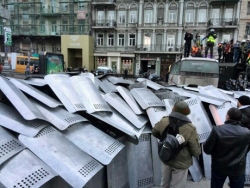 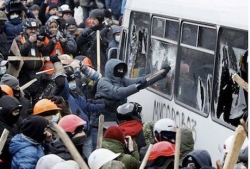 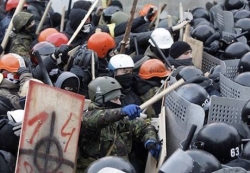 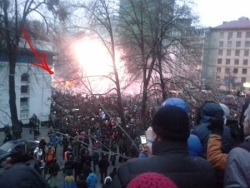 UPD: 19/01/2014 People's Veche, cordons of internal troops are stationed in cordon under AP 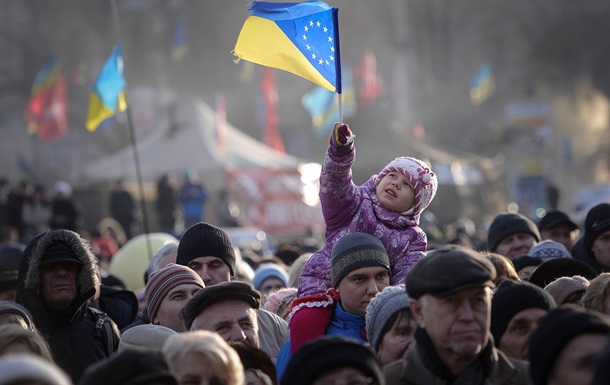 Now the central square of the capital is completely filled with people, but people continue to massively attend the action. The participants of the action settled both directly on the Independence Square and on the hills near the October Palace on the observation site of the Globus SEC, on Sofiyskaya Street, Khreshchatyk in the direction of Bohdan Khmelnitsky Street, UNIAN news agency reported.

The people's voyage began with a traditional prayer service.

According to UNIAN, the journalist and public figure Tatyana Chornovil, the honorary rector of the Kyiv-Mohyla Academy Vyacheslav Bryukhovetskiy, the former Minister of Foreign Affairs Borys Tarasyuk, as well as the leader of the UDAR party Vitaliy Klichko, the chairman of the VO Batkivshchyna faction, will speak before the people gathered on the Maidan. Arseniy Yatsenyuk and leader of the VO Svoboda Oleg Tyagnibok.

A little earlier, under the walls of the presidential administration of Ukraine, an action was held on "throwing toys." The action was organized by Ukrainians through social networks. They came to Bankova with helmets on their heads and masks (mostly medical ones) on their faces.

The women approached the cordon of the siloviki and put children's soft toys under the shields. The participants of the action held placards with the numbers of the resonant laws adopted by the Verkhovna Rada on January 16 and slogans that "the future in Ukraine is no longer possible."

Earlier it was reported that today the Maidan will host the next Veche under the slogans of mass mobilization.

Several dozen people who called themselves "residents of Kiev" on Saturday, January 18, approached the Maidan barricades at the intersection of Khreshchatyk and Khmelnitsky streets with the intention of "bringing order", Interfax-Ukraine reports.

The demonstrators without provocation of conflicts did not allow them to dismantle the barricade. They lined up outside the fortifications, barring all sorts of approaches to it.

Among the "Kiev" was an ex-candidate for People's Deputies from the Radical Party of Oleg Lyashko Viktoria Shilova, who called on protesters to release the center of Kiev from barricades and debris.

People's deputies of the VO Svoboda arrived to prevent possible provocations and clashes. Participants in the event limited themselves to discussions and exchanges of views.