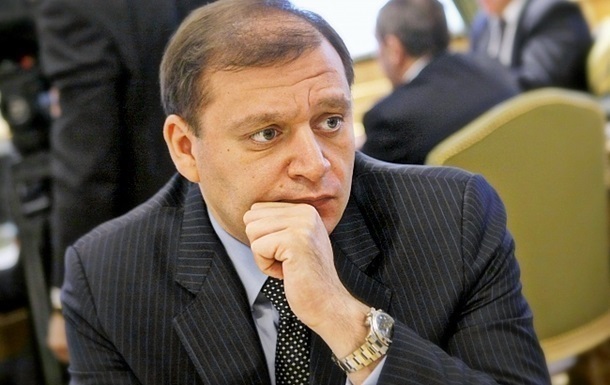 The unknown people went directly to the airport runways.

Ukrainian presidential candidate Mikhail Dobkin was not released from an airplane in Kherson, the unknown people went straight to the airport runways, wrote journalist Channel 5 Inna Nerrodik on her Facebook page on Monday, April 28.

"Dobkin did not get beat in Kherson, did not have time." Dobkin flew to Kherson airport! "Dobkin flew in the morning, and he was not afraid to go any further, somehow the Right Sector got to the airport (the infa is not accurate, maybe just some not indifferent ones) Right on the runways, to meet the candidate well. "Uncle Dobkin was frightened so that he did not go out to people, turned around and flew back to Kharkov." Now he finds out, "the journalist wrote in the social network.

This information was also confirmed by the press service of the Party of Regions in the Kherson region.

"... there will be no press conference of the presidential candidate of Ukraine from the Party of Regions Mikhail Dobkin in connection with the inability of the candidate for the presidency of Ukraine to conduct a full-fledged election campaign, visit the regions of Ukraine, meet with labor collectives and residents of the regions. And also in connection with the seizure of an airport by unknown armed men in the city of Kherson, with the blocking of the movement of the aircraft of the presidential candidate of Ukraine, "the press service said. 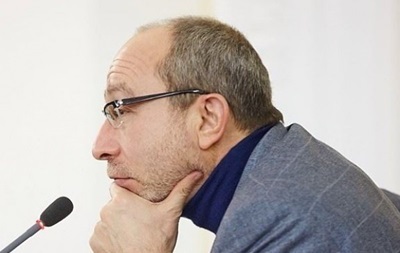 Doctors are fighting for his life.

On the mayor of Kharkov, Gennady Kernes, an attempt was made on April 28, about 12:00, the press service of the Kharkiv City Council reported.

"The Kharkov mayor got a gunshot wound in the back, he is now in the hospital on the operating table, doctors are fighting for his life," the report said.

UPD: 04/28/2014 Ukrainian flag declared a manifestation of extremism in Crimea

According to the decision of the Crimean "Prosecutor's Office" signed by Natalia Poklonskaya, the flag of Ukraine, posted on the building of the Mejlis of the Crimean Tatar people in Simferopol, was recognized as a manifestation of extremism and a violation of the Federal Law "On Countering Extremist Activity."

This was reported by Boris Vishnevsky, a deputy of the Legislative Assembly of St. Petersburg (Yabloko faction) on his website Ekho Moskvy.

According to him, Poklonskaya announced a warning to the Mejlis, "explaining the procedure for criminal liability for violation of this article." The pier, the flag of Ukraine was established "for propaganda and public demonstration, which is the incitement of social, national enmity and became a propaganda of exclusivity."

The announcement of the flag of Ukraine "incitement of social or national enmity" and "propaganda of exclusivity" clearly demonstrates the level of legal literacy of those who are now charged with monitoring the legality in the Crimea, "the deputy resented.

"What kind of" enmity "and which national or social group is" excited "by the Ukrainian flag? As for the rest, the law on countering extremism speaks of" propaganda of exclusivity, superiority or inferiority of a person on the grounds of its social, racial, national, religious or linguistic affiliation Or attitude to religion. "

Whose superiority or inferiority, in the opinion of the Crimean prosecutor, confirms the flag of Ukraine? It is clear that these delusional "warnings" have nothing to do with the law - their sole purpose is to prohibit the flag of the country, of which Crimea remains a part from the point of view of international law and the overwhelming majority of the countries of the world.

I remember that Russian flags hung out freely in Crimea for many years, and freely went with them to rallies. And no one declared these flags as "symbols of extremism" and did not pursue it. But now there have come other times - entry into the "Russian legal space", where absolutely other laws. Their Crimeans will very quickly feel on themselves.

When they recollect it, it will be too late: in Russia, an attempt to realize the "right to self-determination" means landing for five years, "Vishnevsky stated.

Riza Shevkiev, head of the Crimean charitable foundation, on whose balance the Mejlis office is located, told the Air Force Ukraine that a warning explaining the procedure for criminal liability for violation of this article was received by an official letter signed by the wanted person in Ukraine "acting. Prosecutor "of the Crimea Natalia Poklonskaya.

April 21 representatives of "self-defense of Crimea" tore the flag of Ukraine from the building of the Mejlis of the Crimean Tatar people Simferopol. Later, the Mejlis employees returned the flag to the place, and Mustafa Dzhemilev called what is now happening in the Crimea "a fascist-type democracy."

UPD: 04/28/2014 The United States has sent B-2 "Stealth" strategic bombers to Europe in case of Russia's invasion of Ukraine. VIDEO

The United States has sent three B2 Stealth bombers to Europe because of the growing tensions with Russia associated with Ukraine.

This was reported in the US Defense Ministry, the turnerradionetwork reports. Source: http://censor.net.ua/v282986

"Since Russians refuse to answer phone calls from Defense Minister Heigel or President Obama, we have no choice but to send a message in a language they understand," the Pentagon spokesman said.

In the center of Kharkov, the police detained 13 aggressive supporters of the federalization of Ukraine in the evening of April 27.

This is stated in the press service of the Kharkiv police. Law enforcers seized the detainees of special equipment, bits, helmets, blasting bags and Molotov cocktails.

"On April 27, unauthorized events took place on Liberty Square with the participation of radical citizens, activists on the square illegally installed tents, made a fence of wooden pallets and sand, lit a fire and all this they did for a specific purpose," the report says.

The detainees were taken to the territorial police units, a check is being carried out.

Now on the territory of Ukraine, as noted, an anti-terrorist special operation is being conducted to resolve the situation in the country, to overcome any manifestations of separatism on the part of radical-minded individuals and to prevent the seizure of administrative buildings. Particular attention is paid to the eastern regions, such as Donetsk, Luhansk and Kharkiv.

UPD: 28/04/2014 US prepares sanctions against Gazprom and Rosneft management 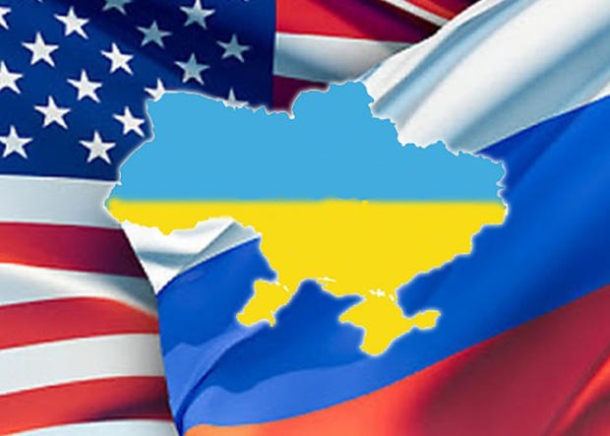 The US is preparing to impose sanctions against the president of Rosneft Igor Sechin and the chairman of the board of Gazprom Alexei Miller.

This is reported on Monday by the New York Times referring to unnamed representatives of the US administration, RIA Novosti reported.

Rumors about the inclusion of Sechin in the sanctions lists appeared earlier, but then they were not confirmed. Sanctions involve freezing assets in US jurisdiction and prohibiting US companies and citizens from doing business with people on the list.

Recall, the G7 countries on Saturday accused Russia of non-compliance with the Geneva agreement on de-escalation in Ukraine and threatened with new sanctions, which formally respond to the annexation of the Crimea.

UPD: 28/04/2014 In Kharkov, after a fight with the ultras eight hospitalized: separatists attacked with sticks, bricks and weapons. PHOTO report + VIDEO 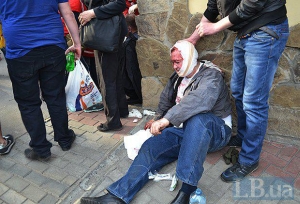 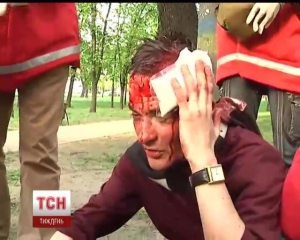 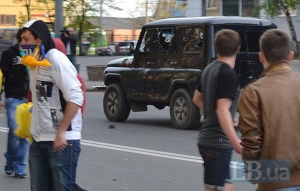 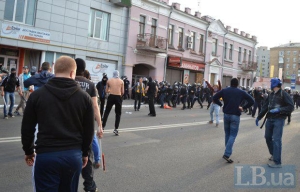 After the fight between the ultras and the pro-Russian activists in Kharkov, eight people were hospitalized. This Ukrinform was confirmed by the director of the department of public health of the Kharkiv Regional State Administration Alexander Galatzan, reports Censor.

"Eight people were taken to the city hospital of ambulance, six of whom were assisted on the spot by the doctors," Galatsan said.

As Ukrainian News earlier reported, in the evening of April 27, beats, sticks and stones were used between the ultras of Metallist and pro-Russian activists in a fight. Two militiamen are among the victims.

The police are checking on the fact of the event. So far no one has been detained.

In Kharkov, the separatists attacked patriotic ultras with sticks, bricks and weapons. Faces under the Ukrainian flags moved to the stadium "Metalist", but on the way they were met by several hundred people with St. George ribbons. They began to throw sticks and bricks at each other. Some witnesses insist that the separatists opened fire on fire-fans. "According to medical experts, injured people have light and moderate injuries, including two police officers," the law enforcers reported, TSN reports.

As the correspondent of LB.ua reports, the column of fans that moved from the Constitution Square to the Metallist stadium was divided at the crossroads of Kirov and Plekhanovskaya streets. From the seven thousandth column of fans, several hundred young guys detached - the fans received information that an attack on the column of pro-Russian activists was being prepared, and ran in their direction.

In the area of ​​Plekhanovsky Street and Gagarin Avenue, the ultras opened fire from the car. "This car belongs to the leader of the organization" Oplot "Yevgeny Zhilin, - says one of the participants in the march, the witness of the attack Sergei. -" Oplot "is known for supplies of" titles "for Antimaydan in Kiev, this car used to participate in attacks on the Euromidans in Kharkiv. Two of our guys today received gunshot wounds from Zilin's car. "

The machine from which the shooting was conducted was seriously damaged in the collision, but could escape from the scene.

The procession of the thousands march was guarded by dozens of law enforcement officers, but they practically did not interfere in local fights between ideological opponents. Although somewhat later the organizers of the march and the leadership of the Kharkiv police had to make considerable efforts to ensure that the mutual throwing of stones by the militia and the fans did not develop into a large-scale scuffle.

The Interior Ministry said that during the clashes, two militiamen were also injured. "Aggressive supporters of federalization tried to attack the participants of the action (march - Ed. Ed.), While using bits, sticks, etc.," the report said.

Let's remind, the fans, who had previously been at enmity, decided to unite in the march "For United Ukraine". The action of unity began on the Constitution Square and ended near the Metalist stadium just in time for the start of the match.