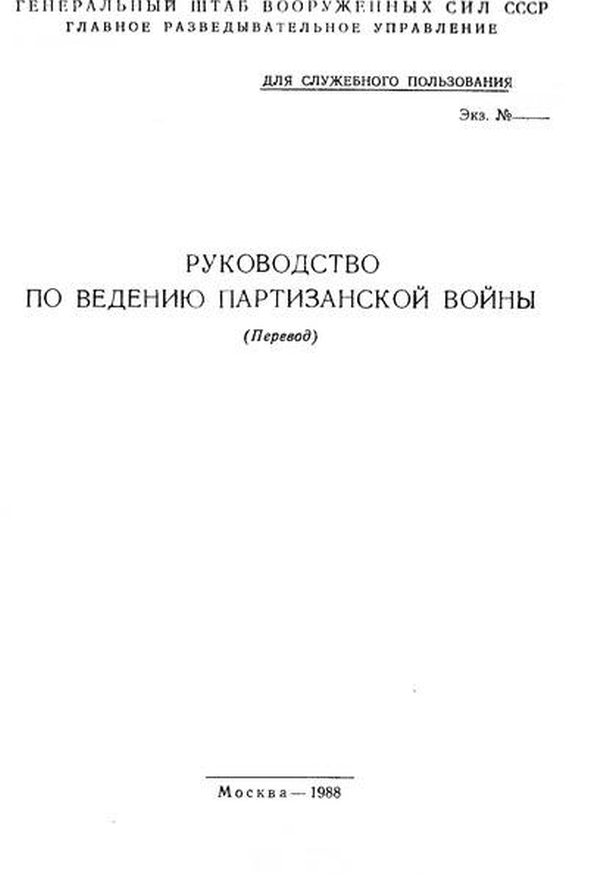 Interest in the book appeared after the amazing story of one Tallinn about the military doctrine of Estonia and how NATO troops teach them to lead in the forests of this country with a credible adversary.

The main operational goal of guerrilla warfare is to continue resistance in enemy areas occupied by the enemy.

For weak or failing states, guerrilla warfare in some cases may be more important than the armed struggle of their regular armies.

In the face of the threat of a general war with huge human and material losses, it becomes necessary to resolve the problems of guerrilla warfare.

It can be assumed that in such a war we will be forced to yield to the enemy a large part of the country's territory, and possibly the entire territory. The army can be defeated, but in this case, a large part of it can provide the enemy with a long, stubborn resistance in the Alps.

A significant part of the army and civilian personnel will be forced to survive the occupation of the country. In this connection, the question arises whether they will be able to be loyal to the new government and patiently await their release or continue armed resistance using all available forces and means.

It can not be ruled out that, given the great freedom-loving attitude of the population and the ruthlessness of the probable adversary, sooner or later there will be clashes between the occupying power and the vanquished. Proceeding from this, it is necessary to constantly develop and improve the tactics of guerrilla warfare.

Suppose that Switzerland has become an arena of military operations. On its territory, superior enemy forces invaded. Some parts of the Swiss army managed to escape from the attack of the aggressor and avoid defeat. They retained combat capability, weapons, military equipment and are determined to continue the armed struggle, to resist to the last bit. But the question arises: how?

Let us assume that the enemy captured the city. What should a worker, an employee, an official in the civil service, a housewife and, especially, the army personnel do in this situation? Probably seeing all the hopelessness of resistance, he will abandon his weapon and will dutifully wait for the decision of his future destiny or go to the service to the enemy. There are a lot of questions, but where can I find answers to them? One thing is clear: the enemy is merciless, he will, without a second thought, destroy tens, hundreds, or thousands of people (if this is in his interests). Prisoners are expected to be deported, hard labor or death. The same fate can befall the worker, employee and housewife. The experience of history teaches that the enemy at any time can begin mass destruction of the vanquished.

What if the enemy occupied the country? To defend ourselves to the last. The entire population of Switzerland must resist. The enemy in the occupied territory should not feel at ease. We must harm him wherever possible.

The purpose of this manual is to prepare the population for armed struggle in case of occupation of the country.

In the course of the war, organized armed resistance will mainly be provided by the army. Our duty is to do everything necessary to maintain its combat capability. This should be well understood by the entire population of the country.

For the organization and management of armed resistance in the occupied territory, appropriate governing bodies are needed.