"The secret list of the regulator": the worst banks according to the NBU. DOCUMENT 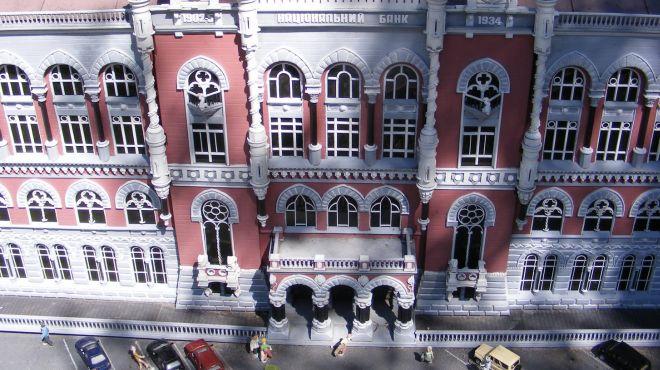 For many years now, the NBU has been using the top-secret “Early Response System” (hereinafter - CPP or System) to evaluate the activities of its wards. This is a set of economic indicators of banks that are not published anywhere and are calculated by the regulator for internal use.

This is written in an article for RBC-Ukraine by Alexei Komakha.

Calculations are carried out for all financial institutions at least twice a month to identify hidden problems. If the bank violates the standards of Sistema, then NBU officials begin to respond: they can call the leadership of a dysfunctional or potentially dysfunctional bank "on the carpet", send a check or give the bank an order to correct deviations, etc.

But not always. If the “client” has a serious political roof or “letters of recommendation from Prince Khovansky,” he may simply be politely asked to be more careful when compiling reports.

It is noteworthy that the CPP is not regulated at the legislative level and is the know-how of the officials themselves. Over the past ten years, Sistema has changed dramatically several times. Some indicators were added, others were removed.

There are several dozen of these indicators. The exact list of standards and the algorithms for their calculation are unknown even to bankers. In the bowels of the NBU supervision, the secrecy of the methodology is explained by the desire to avoid sketches when reporting wards.

At the same time, the CPP indicators are, in fact, an analogue of the mandatory economic standards that banks must calculate and comply with according to the Instruction on the procedure for regulating banks in Ukraine (approved by NBU resolution N368 of 08/28/01).

In contrast to the official standards, which are partially published by banks, the calculation algorithms in the SRP are much more stringent and much more objective reflect the state of affairs in the financial institution. That is why the NBU keeps the calculated results a secret.

By and large, the official standards for publication have long been turned into fiction. In general, everything looks just fine in the system.

Although in reality most banks either “draw” these indicators or violate them openly. This is recognized by officials themselves.

For example, the first deputy chairman of the NBU, Alexander Pisaruk, recently complained about the imperfection of the “reporting” discipline of banks, which, in his words, “reduces the effectiveness of the NBU’s early response system and the regulator’s overall supervisory functions.”

As a result, the NBU even introduced a moratorium on punishing banks for violating mandatory economic standards, if this is due to the devaluation of the hryvnia or the loss of banks in the Crimea and the Donbas. While war and annexation hit very hard mainly on the financial condition of large banks, the entire banking system suffered from devaluation. Therefore, the de facto non-binding of mandatory standards applies to almost all financial institutions.

Another thing is CPP. According to informed bankers, now the NBU's banking supervision pays more attention to analyzing the reporting of the secret "System".

The main parameters that are assessed in the СРР are capital adequacy, liquidity, the level of problem and insider loans, the presence of gaps in the terms of attracting liabilities and asset allocation (the so-called gap), return on assets and other key indicators. But at the same time, the regulator gives the most objective assessments of these lighthouses.

The NBU attaches the highest importance to the two indicators as capital adequacy and the share of negatively classified assets (NCAs). According to CPP, the worst combination of these two indicators is observed in the following banks. 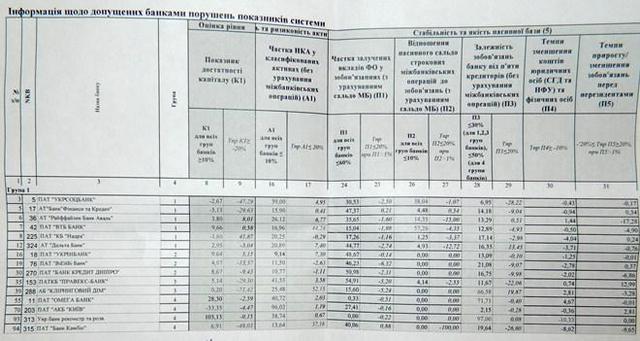 Almost all banks violate one or two CPP standards, sometimes without even realizing it. But there are record holders who do not correspond to the NBU's ideas about the ideal bank immediately in 7-8 parameters: 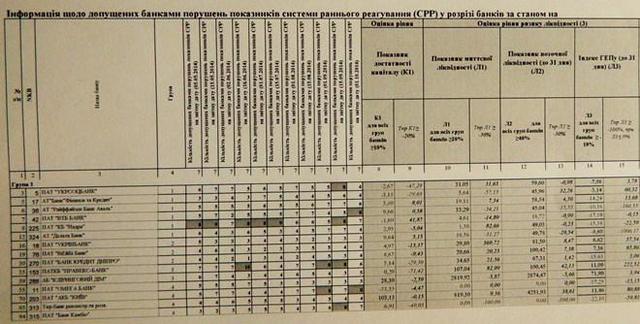 As you can see from the table, many violators work with deviations at least from May to October last year. Although some live with this years. Most likely, the picture has not changed at the moment.

Champions for non-compliance with CPP indicators are VTB Bank and Kiev Bank with 8 violations each.

VTB, controlled by the Russian state, last year became one of the leaders in the outflow of deposits. In addition, the quality of the bank's loan portfolio was significantly spoiled by the war in the Donbass and the annexation of Crimea, as well as the massive departure from the homeland of many prominent regionals who liked to lend in this financial institution and are now unlikely to pay off their debts.

At the moment, the bank needs significant additional capitalization, the prospects of which are very vague due to the introduction of EU and US sanctions against the parent VTB. Source: http://censor.net.ua/p322859

The most shocking picture is observed in the bank "Kiev", which is 99% owned by the state represented by the Ministry of Finance. He has the lowest capital adequacy ratio (K1) in the system according to the СРР (-) 33.35%. The bank's liquidity is equal to zero, and the share of negatively classified (non-working) assets exceeds 96%. In fact, this is not a bank, but a "black hole". This, if I may say so, the institution has not been paying deposits for many months and does not make payments at all.

Recently, Finance Minister Natalya Yaresko promised to deal with problems in this bank. But it is unlikely that she will succeed.

Money in "Kiev" has evaporated for the second time.

The first - even during the crisis of 2008-2009. After recapitalization in 2009, the institution was unable to cope with the problems, and more than UAH 3 billion contributed by the state to the charter capital of this bank disappeared in an unknown direction. Source: http://censor.net.ua/p322859

The second "honorable" place in the number of deviations in the "black list" of the CPP was shared by Nadra Bank and Cambio Bank, which scored seven points each.

Cambio has already been declared insolvent and withdrawn from the market.

Nadra Bank, owned by Dmitry Firtash, has been leading the CPR anti-ratings for more than half a year and often does not make client payments for months. Bank assets amount to almost 36 billion UAH (11th place). It is problematic to remove it from the market; nationalization is too expensive.

Given Firtash’s proximity to the President, it is hardly possible to do both without the consent of the owner or the “portrait” itself. Most likely, the NBU will continue to pretend that it does not notice problems in the Firtash bank until depositors begin to storm the regulator's office.

It is noteworthy that the Clearing House bank (five violations), which also enters the orbit of influence of Dmitry Firtash and his business partner, people's deputy Ivan Fursin, also appeared in anti-rating.

Oddly enough, the Austrian Raiffeisen Bank Aval (RBA) and the Italian PravexBank (six violations each) were also on the black list of NBU supervision. Unlike their Ukrainian colleagues, unfortunately, these banks carry out client payments much more accurately. A hit in the anti-rating is most likely due to the lack of obvious falsifications in the reporting.

Although the general condition of these financial institutions is also difficult to call brilliant. So, for example, in the RBA, according to the CPP, capital adequacy (K1) is only 3.8% with a rate of at least 10%.

Among the leaders in the number of violations of CPP indicators for many years there is another institution with Italian capital Ukrsotsbank. It is interesting that Ukrsotsbank in the first half of last year even in official statements acknowledged a violation of NBU standards.

The Bank did not immediately fit into two mandatory (public) standards: the ratio of regulatory capital to assets and the maximum credit risk per counterparty. Nevertheless, by the end of the third quarter, the accountants had corrected something in the statements - and the bank was in openwork.

But according to the version of supervision, not everything is so rosy. According to officials, Ukrsotsbank actually has negative capital. Capital adequacy ratio (K1) according to СРР in this bank (-) 2.67%. At the same time, Italian shareholders publicly refuse to capitalize their Ukrainian daughter, citing the lack of reforms in Ukraine and plan to get rid of an unprofitable asset.

It is interesting that at least four persons involved in the NBU’s “black list” - Nadra Bank, Delta Bank, Kiev Bank and the Ukrainian Bank for Reconstruction and Development (like Kiev, it belongs to the Ministry of Finance) are already recognized as problematic (not confused with insolvent). The fate of these financial institutions is still a big question.

Most likely, Kiev and the UBRD will be sent for liquidation. What to do with Delta and Nadra, it seems, neither their owners nor the National Bank know.

The main violators of Sistema and the NBU chairman Valeria Gontareva did not answer the editor’s written questions.