# Euromaidan # war # clashes ... Statistics of protests that changed the Country ...

Statistics of the protests that changed the Country (INFOGRAPHIC) 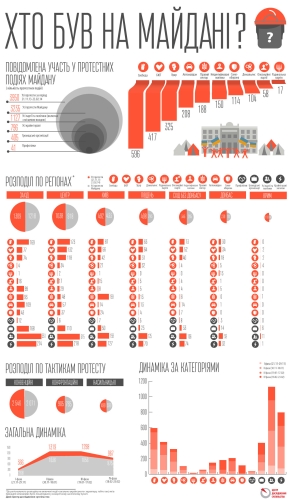 On July 9, at a press conference in the UNIAN news agency, sociologists at the Society Research Center presented the results of monitoring of protests, repressions and concessions during the Maidan, which is supported by the International Renaissance Foundation and the National Endowment for Democracy.

Throughout Maidan, sociologists at the Society Research Center recorded all the protest events that took place throughout Ukraine, along with repressions by the Yanukovych authorities. A unique database of all protests and repressions in all squares has been created, anti-Maidan and beyond it now allows you to accurately answer many pressing questions about Maidan participants, its nationwide distribution and the role of violence, over which heated debates continue, manipulations by politicians continue, and distorted picture in the media.

The main results of the study are provided in this review.

In total, at least 3950 protest events were recorded from November 21, 2013 to February 23, 2014 (the data is still supplemented and updated). This number of protests over three months exceeds the protest activity for the whole of 2013 until November 20 (3428) and the number of protests for each of the previous years, starting in 2010.

Among the 3950 protests for the period 3235, they were directly related to the Maidan and took place in its support, and 365 can be attributed to anti-Maidan.

Notable participants of the Maidan

It is important to keep in mind that this is precisely the reported participation of the media, since often the protesters were reported collectively, for example, “activists of Euromaidan”. Thus, in 50% of the protest events of Maidan, the participation of one particular party, organization, trade union, and ideological initiative was not reported. These indicators should be considered as a kind of "minimum bar" of participation in protests, as well as an indicator of its visibility to the media. In addition, it is important to remember that this is precisely the data of participation in protest events. Promises to which protest activity was not a priority, for example, humanitarian ones like Euromaidan-SOS or Warta in the hospital, were not expected to be noticeable in the information about the protest events.

The role of the extreme right

In total, the participation of extreme right-wing forces (VO "Freedom", the Right Sector, and other Ukrainian ultranationalist parties, organizations, and initiatives) was recorded in 25% of the Maidan protests. This, obviously, contradicts the propaganda pictures of Russian television, since most of the Maidan protests, according to reports, were held without their participation, and the role of the right sector was exaggerated at times. However, this is, nevertheless, a significant share of the Maidan, which could not be neglected, hushed up or downplayed. But otherwise, VO "Freedom" turned out to be an active political force on the Maidan.

The value of regional areas

Despite the fact that the Kiev Maidan was reported more often in the media, the share of its protests was only 13% of the entire Maidan (433 protest events) .

But the leader in the number of Maidan protests is the Western region , where 38% of them were recorded (at least 1218 protests). Also, the Kiev region is ahead of the Central region with a share of 29% (at least 918 protests). Thus, two thirds of the Maidan protest events occurred outside Kiev in the western and central regions . In the East and South (excluding Donbass and Crimea) - 8% each, in Donbass (3%) and in Crimea (1%) the number of protests is less than in Kiev, but in total Maidan in southeastern regions is also ahead of Kiev in number protests.

However, among individual cities in Kiev, the largest number of Maidan protests took place . The closest in terms of indicators, the city - Lviv - is more than twice behind the capital (185 recorded protests). In general, among the top 10 cities in terms of the number of Maidan protests, Western Ukrainian cities (Rivne, Lutsk, Ivano-Frankivsk, etc.) are expected to dominate and there is only one city from the southeast region - Odessa (at least 94 protests).

The mass area in the West and in the Center on average was not inferior to the Maidan. There were no Bagatos rallies of rallies, as in December Kiev, but the number of Maidan protests with more than a thousand participants was significantly higher than in Kiev. Such protests were recorded 131 in the Western region, 75 in the Central and 58 in Kiev. A low mass of Maidan was expected in the southeastern regions, especially in the Donbass and the Crimea, where more than 50% of the Maidan protests were not collected and 100 participants.

Very indicative of the understanding of the present military conflict is the fact that the Maidan in the eastern and southern regions (except Crimea) turned out to be more party and with a large participation of the extreme right. So, after Kiev (32%), the participation of the extreme right is high for the Maidans of the East and Donbass (29%), and the lowest for the Center (24%) and the West (23%). The same applies to the participation of opposition parties in local squares. In the Donbas (54%), the South (51%) and the East (40%) it was higher than in Kiev (37%), the Center (34%) and the West (29%), where there were really massive Maidan support from local people. At the same time, opposition political parties and extreme right-wing forces, which already had a very low level of trust on the part of residents of the southern and eastern regions, only repelled them from Maidan, excluding the emergence of a truly national movement against Yanukovych and approval of the results of the Maidan.

The share and absolute number of confrontational and violent events on the Maidan, of course, exceeded the protests of the previous period. On Maidan, 24% of confrontational protests were recorded (compared with 19% of protests in 2013 before the start of the Maidan), as well as 12% of violent ones (compared with 8% before the start of the Maidan in 2013). However, all the same, almost two-thirds of the Maidan protests (64%) took place in a peaceful conventional manner in the form of rallies, pickets, tent camps, etc.

Characteristically, the share of confrontations and violence was significantly higher in Kiev (49%), the Center (39%) and in the West (37%), where Maidan had massive support than in the southern and eastern regions, where radical actions did not even make up a quarter from all the protests of the Maidan. By the number of confrontational and violent protests among individual cities, Kiev was the leader (239 events), and West Ukrainian regional centers followed by a considerable margin.

Our analysis indicates that violence by protesters was a response to violence by authorities, and not vice versa. If only 12% of the protests in the country's squares were violent, then every third protest experienced repression. Not only law enforcement agencies were involved in the negative reactions to the protests. In addition to the police, at least a quarter of the reprisals fall on the unknown, most often the so-called “aunts” (in addition, in a significant number of events they acted together with the police). Courts were also active - 13% of repressions.

Despite the fact that the level of violence on the part of the protesters to disperse Kiev's Euromaidan on November 30 was minimal (6%), every 40 protests out of a hundred faced a negative reaction from the authorities. And in the last phase of the Maidan (beginning on February 18), when the police openly used weapons, the rate of repression to the number of protests fell by half. In general, the authorities, with varying success, used various tactics of confronting activists: ignoring, pacification, and suppression. At the beginning of the Maidan, attempts to disrupt stocks and injunctions predominated, but over time, methods became more radical. The authorities began to actively use the courts for repression directly against activists, increased pressure from law enforcement agencies and the number of arrests. Finally, authorities blocked protesters on Maidan and turned to overt violence.

There are also regional features of using various methods of repression. In all regions there is a consistently high proportion of physical confrontation between police and protesters. In Kiev, total repressive court decisions were handed down, and the Center created obstacles for activists seeking to get to the central Maidan. In the East, "aunts" were active. Protesters in the West were more active, including because they met less resistance from local authorities.

The full results of the research, methods and classification of events can be found in the report "Statistics of protest events of the Maidan: participants, geography, violence" on the website of the Center for the Study of Society

Monitoring of protests, repressions and concessions has been carried out by the Center for Society Research since October 2009. This is a unique project for the systematic collection of information about all (regardless of subject and number) protests, repressions and concessions in response to real-time protests throughout Ukraine based on monitoring of more than 190 national, regional and activist web media.

The purpose of this project, carried out by the Center for Society Research with the support of the International Renaissance Foundation and the National Endowment for Democracy, is to objectively study protest activity and social movements in Ukraine and to bring this information to the general public in order to protect the right to peaceful assembly and draw attention to grass-roots socio-economic protest initiatives.

The Society Research Center was established in 2009 as an independent non-profit center for the study of social problems and collective protests in Ukraine. The CDS brought together critically-oriented social researchers: professional sociologists, political scientists, economists, cultural scientists, historians and lawyers. The mission of the Center is to create methodologically sound, critical, reflective knowledge for activists of public movements, journalists, experts, politicians, researchers and the general public. The Center actively advocates for an egalitarian and fair society, against the policy of privatization and commercialization of the social sphere and public goods, condemns any discrimination, including socio-economic indicators, gender, sexual orientation, nationality, race, age. The specific directions of the Center’s work are the analysis of educational reforms, monitoring of protest and repressive activity, the analysis of urban planning policies and the study of migration processes.