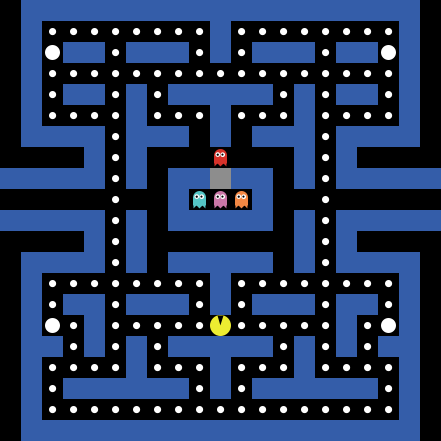 Pac-Man (jap. Pakku-man?) - A computer game in the genre of arcade, developed by Namco and first released in 1980 in Japan. Before the release of Pac-Man, most American games were space shooters such as Space Invaders or Defender Russian. Pac-Man developed a new game genre - chase in a maze that does not involve violence , but because the game was positioned for both boys and girls.

The main character appears in more than 30 officially licensed games and sequels, as well as in countless unofficial clones and fakes. The game influenced various spheres of culture: a series was shot on it and the music album Pac-Man Fever was released, which included tracks with the names of popular games in those years.

The game was developed primarily by Namco employee Tohru Iwatani for eighteen months. In the original, it was called pakku-man [pakku-man]. This name comes from the Japanese descriptive expression “paku-paku taberu” (jap., Eat, bite, opening his mouth many times and shutting it). It is often mentioned that inspiration came from Ivatani from a slice of pizza. In a 1986 interview, he noted that this was half true: Ivatani rounded the hieroglyph Kuti (Yaprot) as a symbol of eating and gave it a semblance of a mouth. Ivatani also said that in many games of that time there was violence, and therefore they were not suitable for all categories of the population. He wanted to create a fun game that most people would like.

Ivatani tried to make the game interesting for wider sections of the population, in addition to ordinary boys and teenagers, and he added an element of the maze to the game. As a result, the game was called PUCK MAN. When the game appeared in Japan in 1980, it received an indifferent response, as games like Space Invaders or Defender were much more popular.

In the United States, Midway launched the game, but under a changed name. This was due to the fact that the Latin letter P is quite easy to change to F, making the name obscene (English FUCK). In order to avoid possible vandalism, by the joint decision of the publisher and developer, the name of the game “PUCK MAN” was changed to “Pac-Man”. After the release of the American version, the new name began to be used throughout the world. Midway has also changed the design of slot machines. Namco's style was more expensive and less suitable for the American market. While “PUCK MAN” was painted white and was full of colorful drawings, “Pac-Man” was made in yellow, and the drawings became simple and memorable.

The American public met the game well, which provided an alternative to Space Invaders, which resulted in unprecedented popularity and revenue that exceeded its successful predecessor. Even Ivatani was surprised at US sales. The game soon became a worldwide phenomenon in the video industry, numerous sequels were released, the style of the game was often copied, but not one of the clones could surpass the original.

In the game it was necessary to complete all 255 levels. The maximum number of points was recorded on July 3, 1999 in Hollywood: Billy Mitchell scored 3,333,360 points. To do this, it took him 6 hours. He collected all the points, all the energizers, all the fruits, ate all the ghosts on all 255 levels.

Video game makers were impressed by the success of the game. Her popularity exceeded the rating of Asteroids, an arcade with gigantic sales. Machines Pac-Man sold in the amount of 350,000 copies. The game was so popular that many fakes were born on its basis in the early 1980s.

The unique game design forced game manufacturers to rethink the idea of ​​endless alien invasions. The element of humor introduced in Pac-Man allowed the game to meet the interests of wider sections of the population. Teenagers' interest in Pac-Man exceeded interest in shooters. Many popular video games of the 1980s, to one degree or another, owe their existence to Pac-Man: Q * bert, Donkey Kong, Frogger.


It will not be superfluous for your friends to learn this information, share an article with them!

The general horoscope for February 22

This day will help to discover new abilities and talents, bring more desire for freedom, a desire to show their originality, independence. Morning hours are not bad for visiting a hairdressing salon, beauty salon, taking care of your appearance.

The day is favorable for the acquisition of image items, gifts for parents and close people. The acquisition of high-quality cosmetics, art objects, and design will also be favorable. Successful will also be the purchase of items for sports, outdoor activities, metal products, steel, weapons. You can successfully spend money on the purchase of a smartphone, laptop, software