Refers to the family of maranthives. Fatherland is South America.

General description: Kalatea is a decorative and deciduous plant, one of the most luxurious. An impressive variety of species and forms, the most common:

Kalatei are whimsical, they need to provide stable and error-free care.

Recommendations for the care of the plant Kalatea:

Illumination : Photophilous, but in no way tolerates direct sunlight.

Humidity : Requires regular spraying and wiping of leaves with a damp soft cloth. In winter, in a well-heated place it is allowed to put on a pallet with water. It is useful to cover rhizomes with wet moss.

Soil : Drainage is mandatory. You can add charcoal and brick chips. The soil is acidic or weakly acidic. When a snow-white deposit appears on the surface of the soil, the top layer must be replaced.

During the growth period, it needs fertilizing once every two weeks with fertilizer for ornamental foliage (for Kalatea saffron for flowering plants). Excess fertilizer is not allowed.

Transplantation : In the spring, annually. The root system is superficial, so the pot must be wide, but not deep at all.

Pests: It is affected by scarlet spider mites (in a dry atmosphere, leaves and stems are braided with cobwebs), mealybug, scabbards (brown plaques appear on leaves and stems, leaving sticky discharge), thrips (grayish dots appear on the leaves).

The plant is allowed to help finish with a soap solution, warm washing and spraying with an actinic (1-2 ml per liter of water). 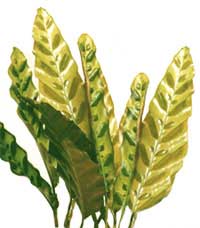 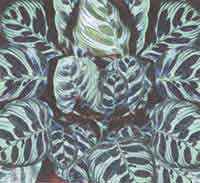 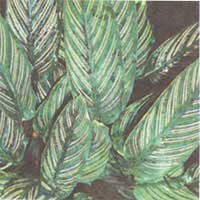 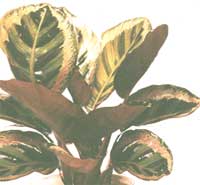 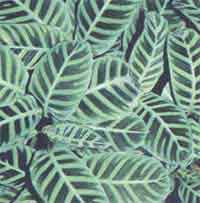