It belongs to the family of cacti.

General description: Echinopsis - very common cactus. Stalk him, at first spherical, gradually extended and is cylindrical. A characteristic feature - the education of many children. Blossoms impressive tubular flowers during adulthood, about 5 years old. Flowers usually appear on the side opposite the sun, turn the pot does not follow.

Usually in the room throw the following conditions:

Recommendations for the care of a plant Echinopsis:

Lighting: light-requiring, prefers the southern windows, but in the spring should be carefully accustomed to direct sunlight, to avoid burns.

Irrigation mode: Moderate in the growing season, a bizarre winter, especially if the plant is kept in the cool.

Humidity: Periodic spraying desirable from the petty spray gun, but Echinopsis not picky about the humidity of the atmosphere. In the summer a better place to fresh atmosphere (in the park or on the balcony). In winter you need to dry substance.

Temperature: Moderate, in the winter period of inactivity at a temperature of 5-10 ° C.

Soil: Draining required. You can add charcoal and brick chips.

In the period of growth needs a dressing 1 every moon fertilizer for cacti and succulents.

Breeding: Babe and seeds (the children easier, but of seed plants is better).

Transplanting: In the spring, young plants every year, once a mature couple years.

The plant allowed to help finish a soap solution, and washing the warm spray aktellik (1-2 ml per liter of water). 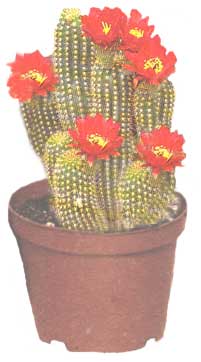