Who or what is "PASSED"? Short course description with pruflinkom and lists. 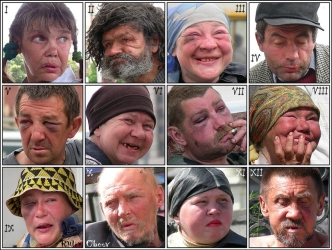 The cattle (Npc, pp. Czech, bydlo - cattle) are the Zhechi racial swear words originally used in the meaning of "large horned / draft animals" (cf. Russian swearing of "cattle") and / or a cart harnessed by this cattle.

According to one of the interpretations, cattle are those who are not able to reflect their actions from several different points of view. That is, cattle can not look at itself from the eyes of another and generally perceive any point of view that is different from the generally accepted one.

In the environment of cattle, various mental illnesses bloom, which manifest themselves in non-original thinking, shelter behind common words, words without essence, stereotyped phrases and outlook, which is a sign of their lack of intelligence. In this connection, they are very stress-resistant to routine. They either have their own vague or public (which in the general basket have found) considerations on most issues. Not sensitive to ambivalence. To old age, these liquefied thinkers turn into ordinary unstable marazmatists.

The signs on which can be attributed to cattle with 99% probability:

I saw a theme in which "cattle" was determined by habits, behavior in transport or at home, at the table, etc.

I have a few other characteristics of this subspecies of the humanoid (biorobot), which fit into a shorter list.
Each item has a number of evidence and logic, supported by many cultural and scientific figures. That is not "IMHO", but "the proof is 146%".

Bydloid only thinks about himself, and ONLY. He does not pay attention to the interests and needs of others. At home, at work, in transport, on the forum, EVERYWHERE. This person is always "right and does not care" as to who thinks what and what arguments he has. If China starves to death, in Africa, mass executions, the crisis in Europe, the US default, and Ukraine, the nature of the civil war, is the main thing for him, everything was good, and then "the grass does not grow" for "my hut with the edge."

2. Presence of children in the absence of family planning

Cattle makes children, not thinking about their future. Cattle has children even when sitting in a cage and eating from a bowl on the floor. Cattle - a slave - multiplies in captivity.

And then immediately it is necessary to say that ANY person who does not have a MATERIAL, SOCIAL AND SPIRITUAL COMPONENT should not have children, because in the opposite case the children join the ranks of slaves, replacing their parents.

He thinks about himself, and he needs children for his own purposes.
Bydloid wants someone to prove something, to ensure their old age, shift duties, exercise a hidden desire for power, etc. And then the children of the cattle become victims, and as a rule by the age of 25 people are already living as a moral invalid, and a slave for the system, because the rednecks did their best to arrange their lives.

3. Bydloid is always an atheist

Bydloid is an atheist, but not because he supports science, but because he does not like the idea of ​​RESPONSIBILITY. In any religion of the world, the Sin which kills Karma is condemned, and the redneck is extremely unpleasant, that for his behavior he has to answer someone.

Bydloid believes that he is the HAMMER and DOES WHAT HE WANTS.
At the cattle in general there are NO AUTHORITIES, the more absolute in the form of God, Jesus, Buddha, Muhammad.

4. The cattle does not like studying and working
Cattle little reads, thinks little, works little. It was LOVE to be entertained, to receive PLEASURES.

This is a consequence of the first point, and here everything is very clear and understandable.

5. Bodloid senile body
Cattle is often sick because of its way of life. Obesity, caries, hemorrhoids, etc. With difficulty squeezed from the floor twice, run 2 km - torture. Go up to the 5th floor with bags - the death load.

6. The cattle are ALWAYS DISSATISFIED and always WAIT and ALWAYS REQUIRE

Bydloid is sure that he needs everything, and that he will wait for the due until it happens.
Bydloid is an atheist, because only that God does not give him anything (as he thinks).
Bydloid does NOTHING for his well-being, and always blames anyone for all his troubles.

In especially neglected cases, the bullhead "OREA AND DEMANDS" at every corner of the street, stopping on. Transport, the Maidan, the queue in the store, WHAT IT SHOULD HAVE TO IT. And MUST MUCH.

Here it is necessary to explain a little. Cattle is not trainable. It is trainable, but it can not be changed or formed.

This is the effect of pygmalion. You can not just take from the boiser to make an adequate person using the tools of education and culture. In rare cases, this is possible with COLLECTED COSTS, temporary, material, etc.

Cattle lives in his world, and how he wants. Any attempt to translate it into "socialism" or "developed EU" will end in failure.

8. Cattle recognizes ONLY MATERIAL values. But only.

Bydloid relies only on what he sees, hears, can feel and so on.
Cattle does not believe in the soul, love, conscience and other forms that have no material expression, which can not be proved without the use of philosophy or psychology (any other science that cattle is denied for ignorance).

Cattle mostly have only one value - MONEY. And this value can change into any other material.

Money as a result and means of realizing all their desires.
And for the sake of this unique value, the cattle are ready to do ALL THAT ANYTIME. ALL.

For cattle MONEY, there is a religion and God in one person. Money for cattle are able to realize ALL PRAYERS and DREAMS.

The main theses are padded. In the discussion, you can express your opinion. Also in the discussion is worth discussing the Proofs and the great figures, who in their works touched on the subject in general and the points of characteristics in particular.

Very important feature.
If you, a young anonymous author, fall under ONE point, then yes, you are a proud representative of 95% of the people of this world.