Entertainment ... Who are we to each other after ...

Who are the relatives of the bride and groom after the wedding? 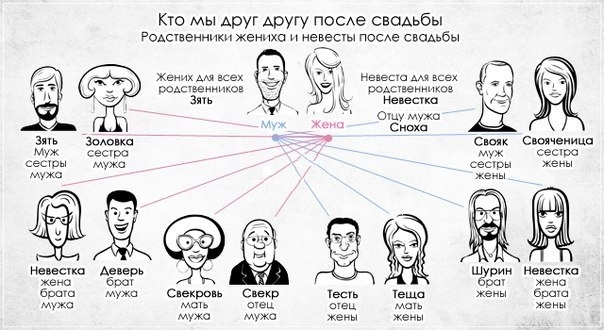 To the proposal "Dance with a brother" and "Take pictures with a brother-in-law" at the banquet did not mislead your couple, you should clearly understand the names of family ranks before the wedding.

My mother -in-law is my husband's mother. In the etymology of this word lies the great importance of mother-in-law in the life of a young couple. "Mother-in-law" used to be pronounced as "all-blood", which indicated her duty to rally all blood relatives among themselves.

The groom's father becomes a father-in-law after the wedding in relation to the bride. Curious traditions associated with the father-in-law, still exist among the Caucasian peoples. For example, in many villages of Ossetia, a young wife has no right to talk with her husband's relatives until the father-in-law gives her a present. This can be clothing, jewelry or household utensils. If, after a few weeks or months, the girl receives a gift from him again, and more expensive, it signals that the bride talks a lot and should behave more modestly.

The word "daughter-in-law" comes from the verb "demolish". In Russia it was accepted that the newlyweds after the wedding lived in the groom's house, and the daughter-in-law had to endure reproaches for poorly executed work and get used to the new conditions of life.

The brother-in-law is the husband's brother. Devere was always considered one of the closest to the newlyweds of people, but the sister-in-law , the husband's sister, constantly jealous of his beloved brother to his betrothed, on the contrary, was regarded as one of the main provocateurs of family quarrels. The very rank of the sister-in-law arose from the ceremony of golding, when the groom's sister after the wedding and before the wedding feast sprinkled her daughter-in-law with ashes from the stove, thus presenting her to the housekeeper.

Mother-in - law is the mother of the wife. Mother-in-law is one of the most active participants in the wedding process: on her shoulders, the supervision of the celebration is often completely overseen. The relationship between mother -in- law and her son-in-law (her husband's daughter) is quite tense, which is reflected in folklore.

Shurin is the brother of his wife. It was believed that the brother-in-law always stands for his sister, so in the old days during family disagreements the girl complained about her problems to her brother.

March 8 : This day can bring unrealistic expectations and excessive optimism. Try not to make promises, as doing them can be more difficult than you think. But think positively - after all, thoughts and words on this day will have a special power and can easily materialize in reality.
March 9 : This day will bring a feeling of own strength, influence. This is a good time for training willpower. Increased passion, magnetism, now is a good time to show their sexuality, sensuality. The day will be favorable for new romantic acquaintances, meetings.
10 March : The first half of the day will bring unexpected opportunities, will open the opportunity to see prospects. Luck will accompany the various undertakings, but it is better to take concrete steps in the second half of the day. The second half of the day is favorable for solving formal issues.