Theory of aiming in billiards 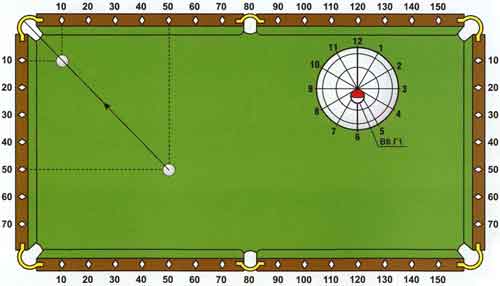 Billiards (billard, from the French bille - ball or fr. Billette, billart - stick) - the collective name of several board games with different rules, as well as a special table on which the game is played.

A characteristic feature of all billiard games is the movement of balls with the help of a cue.

The homeland of the billiard game is considered to be India or China.

When carrying out impacts on impact balls, you must select the so-called true point of the sight.

Imagine a line passing through the middle of the pocket A to the center of the ball being played (see the figure). Point M (marked in red), located on the side of this ball, facing in the opposite direction from the pocket, and is the true aiming point, because it is in it that the contact of both balls is necessary in order for the aim ball to be in the pocket. To make it easier to find this point, you can estimate the cue, that is, you can kiss one ball in the pocket, and then aim your "own" at the point found. But this is usually what novice players do. Experienced athletes at a glance unmistakably determine the aiming point and deliver accurate shots.

But for the correct playing of the ball to determine the point of sight is not enough. You still need to be able to correctly hit the ball. To do this, it is necessary to fully concentrate on the impending blow, trying to encompass the imaginary trajectories of the movement of "one's own" and "another's" and, after making 2-4 aiming strokes, confidently strike the cue at the appropriate point. Sometimes novice players aim long, making up to 5-6 or more strokes with a cue, as a result, the blow turns "wrong", the ball does not fall into the pocket. This is because the culmination moment before the impact is those short few seconds during which the player strains his attention to the maximum, and if the aiming time is tightened, then the regular relaxation of muscles and vision occurs before the impact, and the impact is not effective.

For this it is necessary:

All you have to do is aim at this point and hit the cue ball ...

Now let's look at all this in terms of practice. 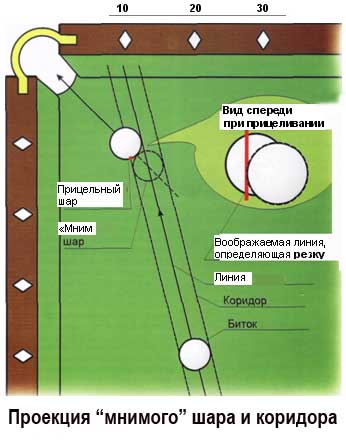 In the aiming system, the most important thing is the choice of the strike line and the location of the cue ball. The accuracy of the stroke depends on the ability to see the blow line clearly. To practice this skill, there are many exercises, but the main thing is the exercise in the mirror. Another necessary exercise is to drive the cue ball into the pocket from different points on the table.

But first you need to learn how to look properly.

Eye work. Of the many ways of aiming and working the eyes (someone at the time of impact looks at the sighting ball, someone - at the point of hit, someone - in the cue ball), I suggest the one that helps me to make a precise blow.

At the beginning, before taking the counter, I see the place where the cue ball comes from above. To do this, in front of the aiming ball, I mentally put the "imaginary" ball, which, together with the sighting, would be strictly on the line passing through the middle of the pocket. This is not easy to learn at once, but if you specially train your eyes, then in time you will easily represent this auxiliary ball.

After that I start to drive back and forth with one weight of cue, watching only the tip, which allows me to see if its movements coincide with the strike line.

I do 3-6 swings, then I stop the cue near the cue ball, I take a short pause and, without raising my head, let alone my shoulders, I look at the cue ball, trying to concentrate so that nothing distracts me. Then smoothly I take my hand back, I pause and smoothly "let go" cue his weight forward, as if imitating the movement of the sea wave, which rushes to the dock.

In this case, I imagine that the cue will "reach" the sighting ball, and the cue ball does not seem to exist - at the moment of impact one should not lose concentration of sight at the place of hit.

Cutting. In this technique, the most important thing is the ability to see the cue ball and the line of impact. This helps the "imaginary" ball, mentally attached to the sight. If it is difficult to imagine an "imaginary" ball, another method can be used: divide the sighting ball by an imaginary line in the vertical direction to determine how much it needs to be cut off. Then mentally draw a corridor from the cue ball to the aiming ball so that the corridor line, for example, on the left, coincides with your vertical line on the target ball (when the aiming ball is cornered to the left).

The ability to see the corridor helps to determine the location of the cue ball.

Imagine that the task is not to hammer the sighting ball, but to direct the cue ball as if you were hammering it into the pocket. When this concentration of attention becomes a habit, your results will begin to improve.

It is necessary to make two pauses. One - at the time of stopping the cue before the cue, after you are convinced that the cue is moving along one line, and the second - at the end of the swing before striking.

These pauses can be very short, almost invisible, but the "deeper" they are, the more controllable, I would even say, the blow is deliberate.

After the first pause, slide the cue back gently, as if you are pulling the bow string. The body remains motionless. The right shoulder does not go up: if you involuntarily rise before the last swing, as a result you can lose the stroke line and deal an inaccurate blow.

At the moment of the second pause at the end of the last swing, try to make sure that the right shoulder is left in place. Shift of the shoulder is an inconspicuous but harmful error, because in this case the blow is not applied on the specified stroke line.

Learn to smoothly start the cue after the second pause, so that the movement starts from the brush, and not from the shoulder.

I want to draw your attention to the fact that when the second pause turns deep (1-2 seconds long), you will feel how you stand: in a calm state you stand firm and motionless. You need to be able to relieve tension, then you will quickly learn to make an accurate blow.