Clash of Clans - the only strategy game, inside of which I left more than $ 80. It tightens so that you can not stop. I would save myself a lot of time and money if I initially got to the heart of it and did not get scattered about the little things.

The goal of the game, as in many online strategies, is to develop its base, repel attacks and attacks on other players. Clash of Clans, I consider one of the best representatives in the App Store. It has all the criteria for a good game: beautiful graphics, fast loading and incredibly exciting gameplay.

1. Beginners are dying because they are in a hurry 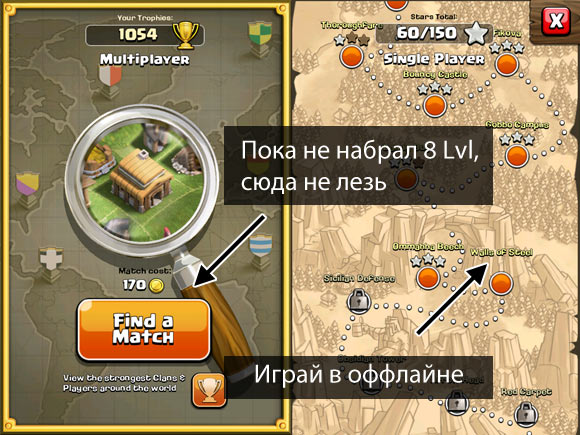 Many players with the beginning of a game career immediately get out into the multiplayer. Do not do this until your development is over 8 Lvl. Otherwise, stronger players will spread your base to the nines. Up to the eighth level, play in the "offline sandbox", fighting against goblins and earning currency for upgrades to your camp. After the eighth level, click on Attack -> Find a Match. Then the fun begins. 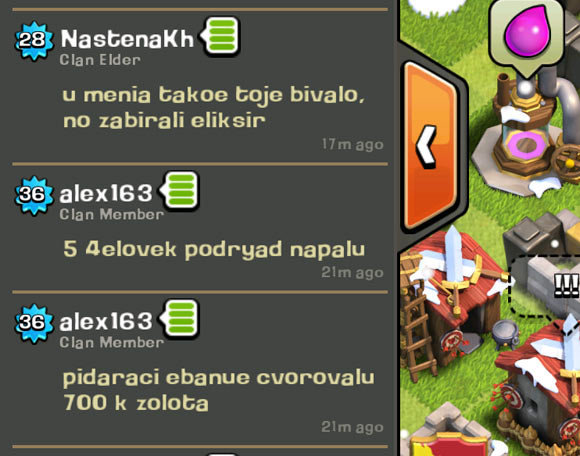 Once you clicked on Find a Match, then you go out into the open field, with you the invisibility is removed and the visits of the robbers begin.

On your base constantly attack other players. Sometimes you get by with little blood, but often raids to zero clean up the gold reserves and reduce the number of Winners' Cups (the only one at the given moment of length ...). This is very insulting. You copy and save, and someone came and took everything. Bastards, their mother!

In the history interface of the battle, opposite the description of each offender, there are four buttons: Replay , Revenge , Visit (alien base intelligence) and View Clan (view clan). Find out what kind of defense system the enemy has and the attack. If the current level does not allow, then wait until you grow up. The guilty must be punished.

3. Away from the conscience - beat the weak

In the process of searching for online opponents, you will be offered different options - from those who are lower or higher than you in the table of general rank. If you see that the victim is weaker than you, attack and do not think about remorse. First, you will save on the strength of your army, because a weak opponent has the appropriate defense; Secondly, victory is guaranteed to you in 90% of cases. Once attacked by a strong player, you will encounter pumped mages, dragons, only you will lose time and money: you will be kicked forward with your feet.

However, this rule ceases to apply to the thirtieth level, where the framework of differences between players is gradually smoothed out. For example, at 27 level I can attack 35 and win.

4. Join the clans and fight fiercely 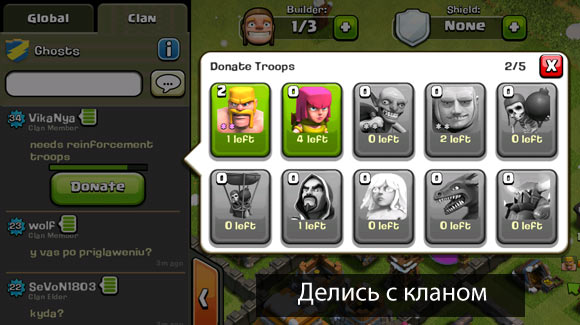 Clans allow the army to expand beyond the established limits of the bridgeheads built. As a rule, other players respond to your request to donate warriors. "Clan" soldiers live in a separate barracks with a corporate flag. It is important that these mercenaries can not only attack, but also defend the camp, if you are suddenly attacked. In turn, share your army with others. Here it is customary to thank each other.

5. Do not get involved in in-game currency 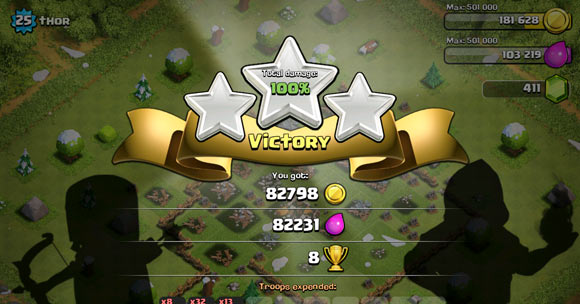 Although the game is in the TOP-1 Cash games (revenue from one iOS-user), it can be done without an in-app purchase. It's longer, but possible. I could not believe when my "commander" level 35 on the question of how much he spent rubles on the pumping, answered that not a penny. True, the second month is playing. I reached level 20 in a week, but I left $ 80 on the battlefields. Why, you ask? By ignorance.

Less can be identified only one: the game constantly needs the Internet. Without it, she refuses to start.

If you're a fan of strategies, I recommend Clash of Clans to install. Wait for me to visit ... Nick - Nevervxydo.

6. Do not force events, otherwise you will become a laughingstock 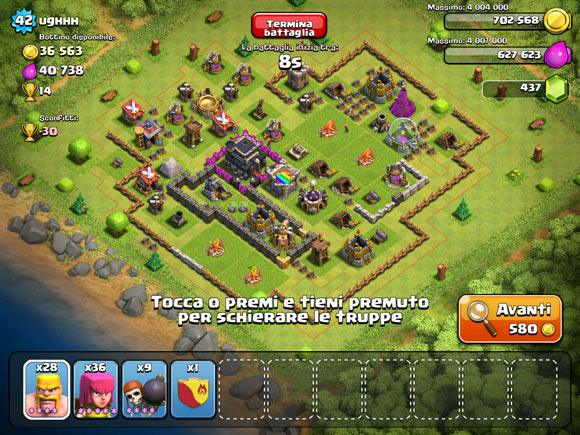 Do upgrade to the next level, when on the present everything is raised to the maximum. Well, or almost to the maximum. Do not force events, otherwise you will become a laughingstock.

In the screenshot above, the dude spent a hundred bucks upgrading the Town Hall up to level 9, I thought it was cool. But I forgot about guns, a fence, buildings. As a result, he was surrounded by the same players with balanced villages and now he is being carried to shreds by everyone who is not lazy. And no one takes in the clan. Who needs such an idiot

Up to 2,300 cups can be easily played sparingly - an army consisting of Archers 6 lvl, Barbarians 6 lvl and Bombers 5 lvl. I was taught a special tactic when my clan went to the TOP and at some point there were problems with resources: I did not have time to collect for the army, as the 10 dragons flew in and took everything themselves, leaving after themselves the smoking bricks.

8. There are many clans in the game, but there are few good players 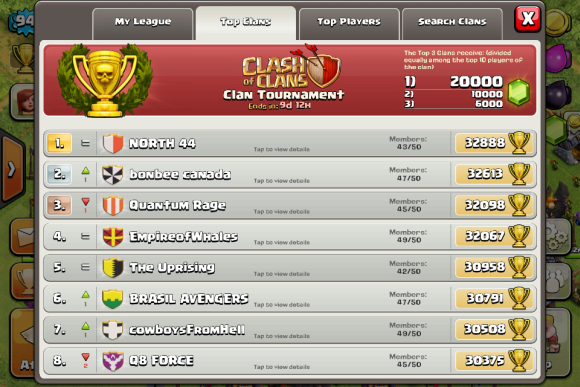 There are many clans in the game, but there are not enough good players. If you see that in the clan little give wars, and requests for donate hang for half an hour, leave this clan. But if you are lucky (like me) and you are in a normal clan, then do not run around: the old people do not welcome it. At some point you just will not be allowed back. 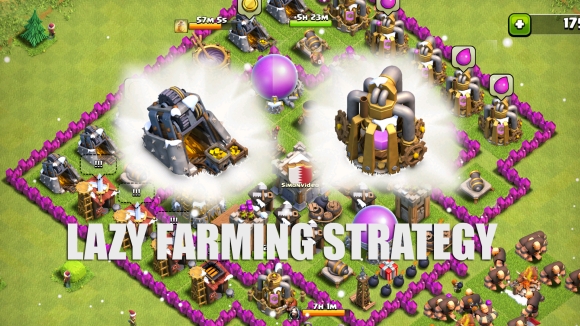 Often, strong players sit on the so-called "pharma", when the whole point of the game is reduced to attacks on weaker bases and the selection of money there. Remember: you can raise martial art only in conditions of equal and stronger opponents. Nobody forbids to farm, thousands of clans do it, but at least occasionally check the personal ceiling, where you can go with your wars. And do not just get there, but sit in the trenches for three days to understand, comprehend, analyze what composition is attacked by the Clash of Clans masters. 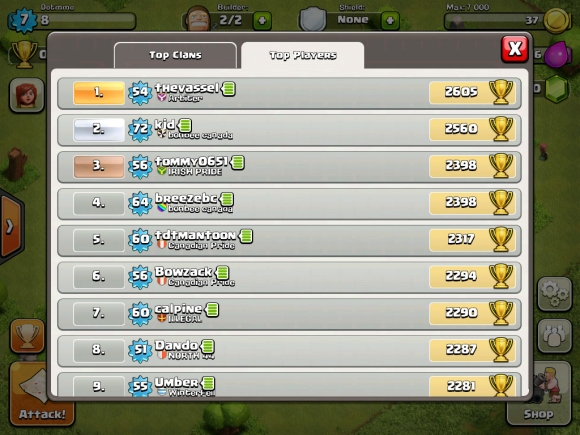 When you enter the game, first hand out wars to your clanmen, and then ask yourself - it's an unspoken rule of successful clans in the TOP 200. My clan reached 41 places in the general ranking, many could not stand nerves, because the conditions of the game in battle And on farma differ from each other, like the ocean and the swamp. Good players are noticed in other clans and real headhunting begins. If you are not hunted, you are only at the beginning of the path of your development.