In our country, in each of its cities, there are thousands of baths in a terrible, just deplorable state. Yellowed, with peeling, porous enamel, and sometimes just rough and deep chips on the sides. In such a bathroom, you can only stand by taking a shower. An attempt to lie in it is equivalent to trying to lie on coarse-grained sandpaper, nailed with nails. If you try to just stretch out in such a bathroom, but also to move after that - scratched skin is guaranteed to you.

And not all owners of such "miracles" simply feel sorry for the money to replace. By itself, the idea of ​​putting a new bath entails not only money costs . In addition to the fact that this, the main item of the bathroom needs to be bought, it must also be DELIVERED from the store and RISE to the floor. Perhaps in many shops it can be done by loaders (for a fee), but that's what they will not do exactly, so it's to dismantle and take out the old one.

But this is where the fun begins. Someone has done a pretty decent bathroom repair. At least there are "sides" around the perimeter of the bathroom itself, which are firmly glued and tear off them, then, after breaking the tile from the wall, which you will then have to put back, someone has a "screen" (this is when the bath from the floor to its side is closed, for example Plywood or gypsum fiber sheet, which in turn is tiled in accordance with the general interior of the bathroom). And no one will give guarantees that after such dismantling the tile will remain intact and it will be possible to attach it back. Rather, on the contrary, at least a few tiles will be broken. And where now buy the same, if we say, they were bought 5 or more years ago? Question....

But this is not the most interesting ... More than half of the houses and, accordingly, the bathrooms in our country are designed in such a way that even if you risk destroying the interior to replace the bath, another more interesting question appears - how the hell is it from There to pull out? (And it weighs from 200 kg, among other things). A good half of the owners of "monster baths" simply can not imagine how to remove this horror without destroying the walls, the door boxes, without breaking furniture or stupidly not beating off the walls of the bathroom tile. Maybe they are ready to pay money for a new bathroom and for its delivery, and for dismantling and installing (And the amount is really going to be quite big.) At least two strong men who will ask for a "strong" payment are needed, but how the hell This is basically done, if in their corridors and the aisles of their housing simply physically can not turn with the bathroom?

Someone, these facts stop, someone is simply a material matter. On average, a new cast-iron bath costs 7,000 rubles (maybe somewhere a little cheaper). Its delivery and recovery is approximately 500 - 1000 rubles . The replacement work, including the cost of the finishing material, which will be damaged and will have to buy a new one, will cost about 5000 rubles . Total, we will get a cost of 12,000-13,000 rubles . (But many repair costs much more). Well and besides, actually monetary expenditure, from the moment of purchase of a new bathroom, to its "working", "finished" condition, it is necessary to survive at least a week in dust in the mud, without the possibility of showering or washing. Not everyone is "under the force." And if there are only women in the house?

But in fact a normal bath would be desirable ... Let's think, for what damn to develop such "rabid" activity? After all, if you think about it, the problem is not in the cast iron from which the old bathtub is made, which will still serve great-grandchildren, but in the enamel, the old enamel of which was covered in a bath and which is in completely unusable condition. Why break everything down and collapse, when you can just put a new coating on cast iron, while not completely breaking anything around? But this can be done and much easier than it seems at first glance. And the most interesting thing is that it will cost 3 - 4 times cheaper than a set of works to replace the bathroom. 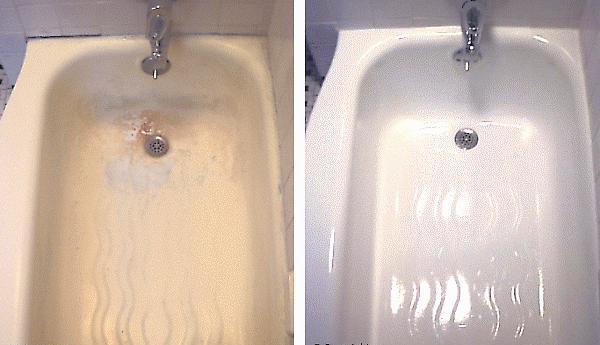 Here is the most interesting. You probably heard that there is a technology for enameling bathtubs. When the master cleans the bath, prepares it, and then in 2 - 3 layers, it applies a new roller or brush with a new enamel. And of course we heard that such work is of poor quality and absolutely short-lived. What I want to tell you, is fundamentally different from enamel. And on the materials used and the principle of performance of work. I'm telling you about the material " Stakril ".

Such a service, " "In fairly large cities, there are at least a couple of firms that are engaged in this" for a long time and seriously. "They ask for their services from 3,200 rubles to 3,500 rubles in large cities where there is competition. I saw price tags and at 4500 rubles per work.The most interesting thing here is that the cost of the material needed to restore one bathroom is 1200 rubles! Ie if you proceed from the fact that you have the necessary tool (meaning simple drill For cleaning, nozzles, shpatelochki and other trifles the total cost of which is unlikely to exceed 3000 rubles), then all other money is your net income.In a relatively experienced master, the restoration process for one bathroom takes 1-1.5 hours.

An important point is that the service of restoration of baths is really of high quality. I can say this because At the house the bath was restored by the same principle. This is not a divorce or an attempt to sell the "herbalife". This service, for which people will be grateful to you for many years and will transmit information about you to their friends and acquaintances. In addition, this business is not an art design or fine art, where talent is needed. This requires knowledge of technology and experience. This can be done by any man with his head and with his hands. More information about the technology of bath rehabilitation you can find on the site