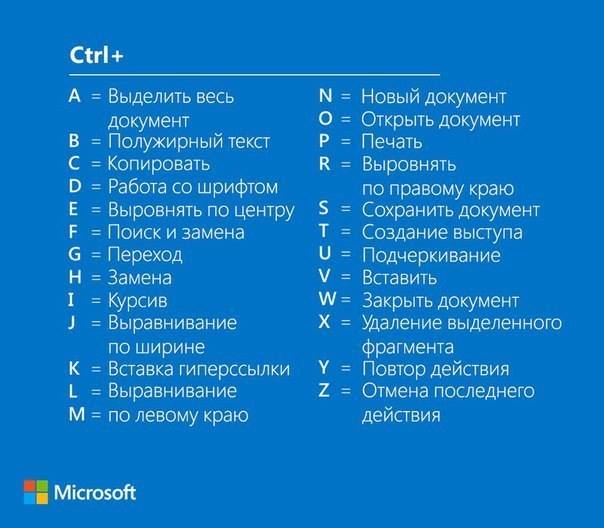 The combination of keys (synonyms: hotkey, shortcut, quick access key, shortcut key, keyboard accelerator) (English keyboard shortcut, quick key, access key, hot key) (for software) - a kind of interaction interface With a computing device (computer, calculator), which is the pressing of a button / key (or keyboard shortcut) on the keyboard to which an action is assigned (programmed) - the commands (operations) executed by this system. Typically, it partially duplicates the menu or button interface and serves to significantly speed up the work, as well as increase the number of possible actions performed by the keyboard. Key combinations are especially widely used in real-time computer games, in which the speed of the player's reaction to the development of events is important, in particular, in strategies.

It's about the Ctrl or Control key. This key is most often located in two copies on a standard keyboard, left and right under the alphabetical keys.

Combinations when working in Windows

Combinations when editing texts, for example in Microsoft Word

The use of combinations allows you to assign several values ​​to one key, which greatly increases the number of actions performed from the keyboard. For example, in engineering calculators there is an "x²" key, above which, as a rule, "x³" is written. When you press this key, the entered number is squared. To execute "x³", a special modifier key is pre-pressed to activate the secondary function (it can have names, for example, "shift", "2ndf", the inscription on it is usually blue, unlike others, white), then press the key "X²". The command written above is executed. Thus, one key is assigned two actions, which reduces the number of buttons on the calculator. You can add a few more buttons to the calculator: "3rdf", "4thf", etc. After that, you can assign three, four or more commands to one key.

On personal computers, Ctrl , Alt , Shift , and Windows ( Super ) or Command keys are most often used in combinations. They are often called modifier keys . In combinations, you can clamp not only one of these keys, but several at the same time.