Health and Medications ... 10 most harmful products ...

According to the UN forecasts, in 2030 noncommunicable diseases will cause the death rate of 52 million people!

This includes such risk factors as unhealthy diet, lack of physical activity, obesity, alcohol and tobacco abuse. These factors account for more than 60% of deaths, 80% of deaths occur in developing countries, including Russia, 25% of men and women under the age of 60 years.

We represent you the 10 most harmful and dangerous to health products, the use of which can cause dangerous diseases. 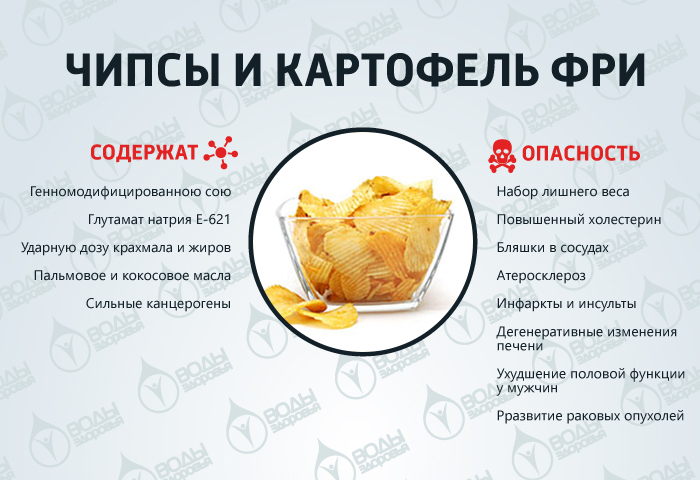 Today, chips are prepared not from potatoes, but from wheat and corn flour and a mixture of starches, as well as genetically modified soy. And all kinds of flavors are added with food flavors and flavor enhancers E.

For example, everyone knows glutamate sodium E-621, a toxin that affects the nervous system of the body, making tasty and desired even the most obscene food, and moreover, causes addiction.

A potato fried in oil contains a shock dose of starch and fats, which will inevitably lead to weight gain, if consumed every day. French fries for fast food are prepared from genetically improved fruits, large, smooth and smooth for better cleaning. They are prepared in advance, frozen and sent to the fast food network. There it is already fried in a mixture of oils, which includes palm and coconut oil. Such a mixture can be used without replacement for up to 7 days. During this time, acrolein, acrylamide, glycidamide are formed in it - fat decay products and strong carcinogens, which cause cancerous tumors.

The danger of chips and French fries is not only in a set of excess weight. Elevated cholesterol, plaques in the vessels, atherosclerosis, heart attacks and strokes, degenerative changes in the liver, impaired sexual function in men and the development of cancerous tumors not only in the gastrointestinal tract are all consequences of eating fast food. 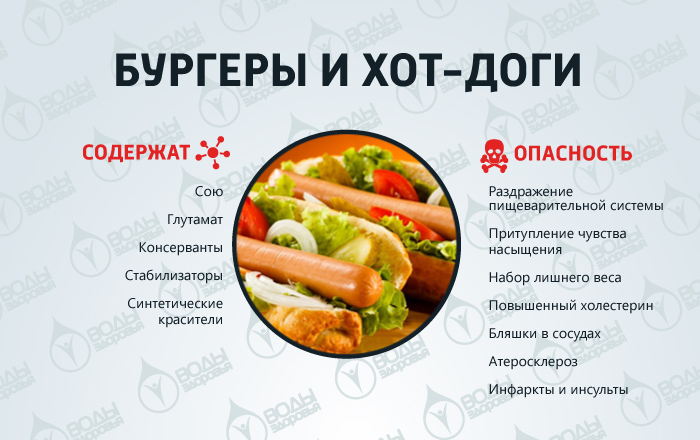 All of the above side effects apply to "fast" sandwiches. And also, in addition to frying, the composition of the meat is added. Whatever meat is enough for everyone, animals and fish are bred on an industrial scale using special mixed fodders and anabolic for weight gain.

In addition, soya, glutamate, preservatives are added to the protein to preserve the presentation for years, stabilizers and synthetic dyes. These supplements irritate the digestive system, dull the sense of satiety, make you eat more and more often. And when the stomach stretches, he begins to demand more food and without harmful additives. 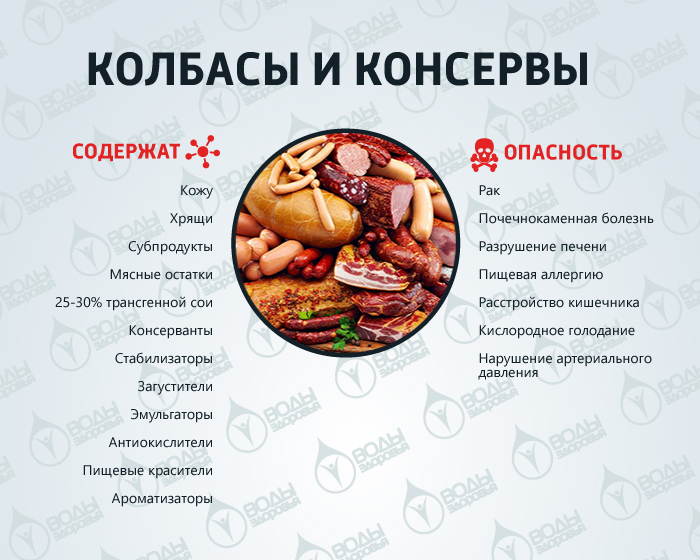 All that is written above about meat, can be attributed to sausages. Plus, the danger of hidden fat is added, because even the most natural sausage product, basically consists of pork skins and fat. Approximate sausage composition, regardless of brand and manufacturer, will be as follows: skin, cartilage, offal and meat residues, 25-30% transgenic soy, preservatives, stabilizers, thickeners, emulsifiers, antioxidants, food colorings, flavorings.

Canned food is a dead product, which has preserved its nutritional availability with E components, acetic acid, sugar and a huge amount of salt exceeding the daily human needs several times.

SWEET AND PUREE OF FAST COOKING 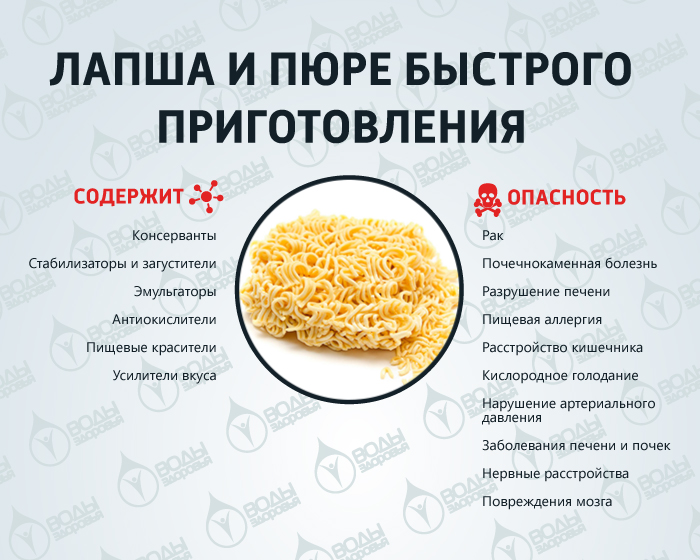 3-5 minutes and lunch is ready, and still a large selection of all kinds of tastes that producers offer. But what we get in fact is a mixture of dietary supplements and no good.

Let's see what is contained in fast food: 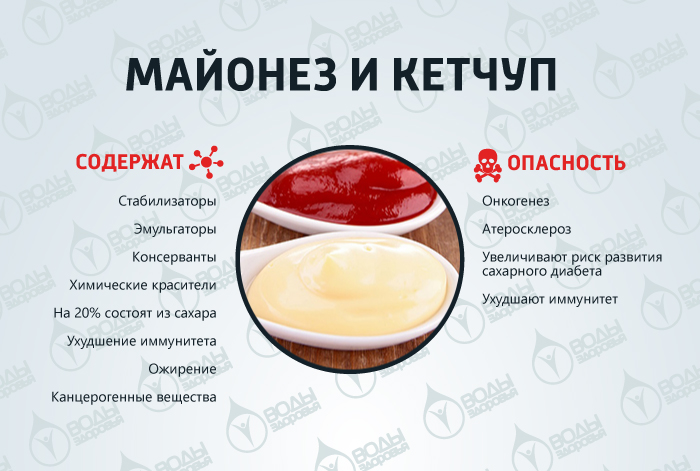 Mayonnaise contains trans fats. They lead to oncogenesis, atherosclerosis, increase the risk of diabetes and worsen the immune system. In addition, plastic packaging also carries an additional risk. Contained in mayonnaises and sauces, vinegar sucks carcinogenic substances out of it, which then enter the body. 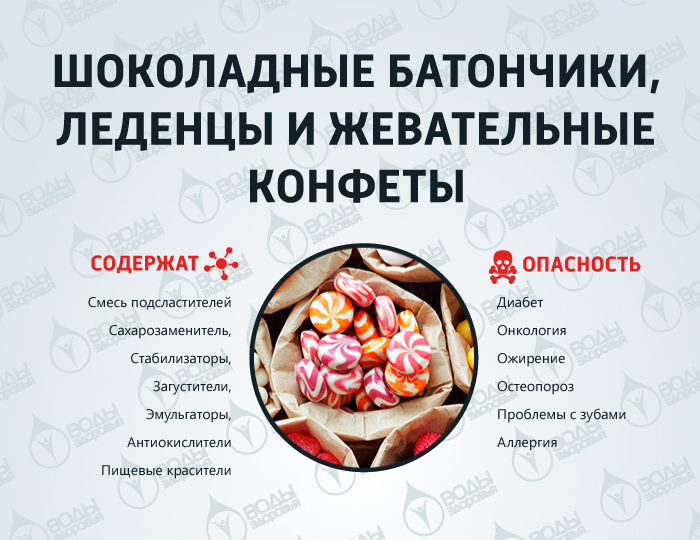 If you do not want to increase the risk of diabetes, oncology, obesity, osteoporosis, problems with teeth and allergies, eat a maximum of 50 grams of sugar a day, and rather give it up altogether. But do not forget that in addition to the pure sugar that we use, it is also found in many products, for example in ketchup, yoghurt, a cake that also contains trans fats.

Similar products have the highest glycemic index, that is, the sugar from them is absorbed instantaneously. At the same time, they do not contain any useful substances.

Bright candy, candy in the glaze and chewing marmalade with all kinds of tastes is a mixture of sweeteners and sweeteners, stabilizers, thickeners, emulsifiers, antioxidants and food colors. 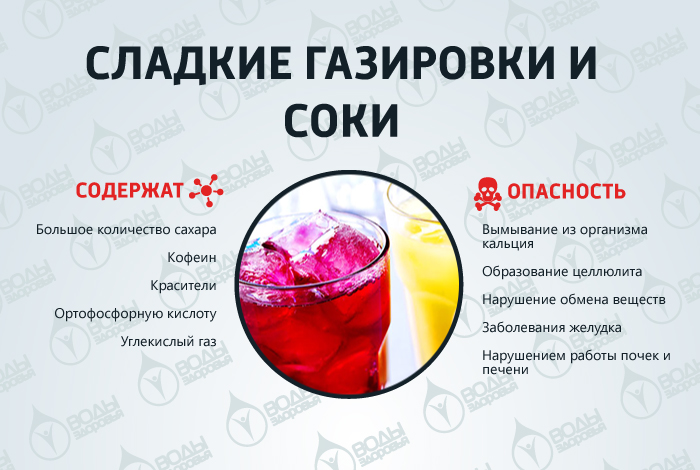 Dietary soda contain sugar substitutes, which are poorly washed away by saliva, irritate the mucous membrane of the mouth and again provoke thirst, I force to drink it even more. Soda makes for the formation of cellulite and in the long run a metabolic disorder.

The composition of the juices from the boxes is almost identical to the soda, with the exception of carbon dioxide. Containing large amounts of sugar, recovered from the concentrate, durable. Such juices vary in price depending on the manufacturer, but remain equally harmful to health. 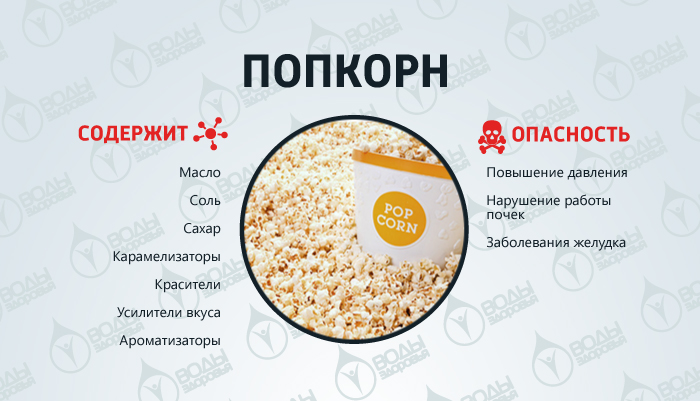 In themselves, fried corn kernels are not dangerous. But when they add oil, salt, sugar, caramelizers, dyes, flavor enhancers, flavors, they become dangerous. The dose of salt in the classic salted popcorn is just off scale, and this is fraught with at least increased pressure and impaired kidney function. 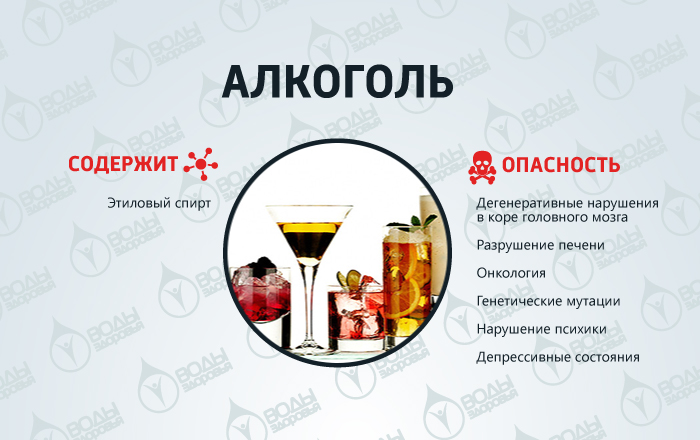 We all know about the dangers of alcohol for a long time, but we will still recall - degenerative disorders in the cerebral cortex, liver destruction, oncology, genetic mutations. Drinking people live 10-15 years less, in addition to health problems, there is a disturbance of the psyche, depressive states. 33% of all suicides and 50% of accidents occur in a state of intoxication.

Even in small doses, it interferes with the absorption of vitamins. 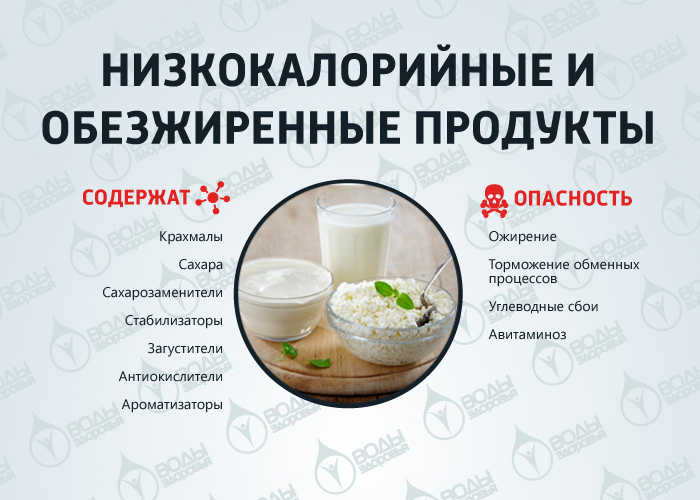 Such products only seem to be helpers for people watching a figure. In fact, lowering fat is compensated by an increase in carbohydrates - starches, sugars and sweeteners.

Thus, such products contribute to obesity, and the food additives contained in them inhibit metabolic processes and lead to carbohydrate failures. Another disadvantage of such products is beriberi, because some vitamins are vitally fat-soluble. Calcium from low-fat dairy products is not absorbed. Well, without stabilizers, thickeners, antioxidants and flavors here also can not do.

To summarize, I want to say that the human body is not so simple, if he has been accustomed to eating the right foods most of the time, then it is more likely to get poison out of him independently without harm to his health. All harmful substances pass detoxification in the liver, kidneys and lymphatic system. Since blood and lymph are 94% water, we recommend drinking a glass of good mineral and drinking water half an hour before and after an hour and a half after eating. Thus, you will help the body to cleanse off harmful substances.