Culinary errors, as they are not done

In nature or at home, preparing for the hundredth time, all of us came across a situation where everything is done strictly according to your prescription, observing all proportions exactly as written, but the result is still far from the grandmother's ideal for no apparent reason "even crack" . In what could be the case? This is probably your common Culinary errors , which will spoil the taste of even the most basic dishes.

Error - an unintended deviation from the right actions, actions, thoughts; The difference between the expected or measured and real value.

Culinary errors, how not to do them. Be sure to keep these tips to yourself and do not repeat stupid mistakes while cooking. 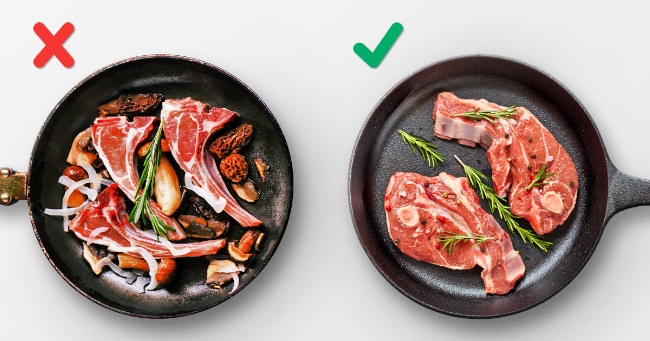 Remember: if you want to cook meat with a crispy crust, it should be laid out in a frying pan so that the pieces do not come in contact with each other. Otherwise, the dish will be stewed.

Fry meat in a frying pan with non-stick coating 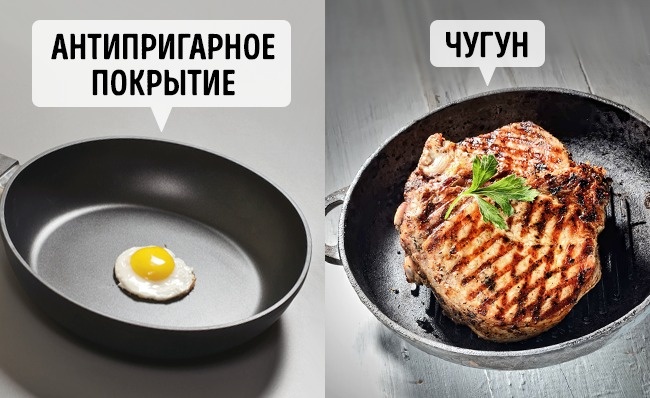 Crispy crust on meat can not be obtained because of the fact that you use a non-stick frying pan for frying. Such dishes are heated more weakly than usual, so it is better to leave it for omelettes, pancakes and pancakes. For meat, use a frying pan or a cast-iron frying pan. 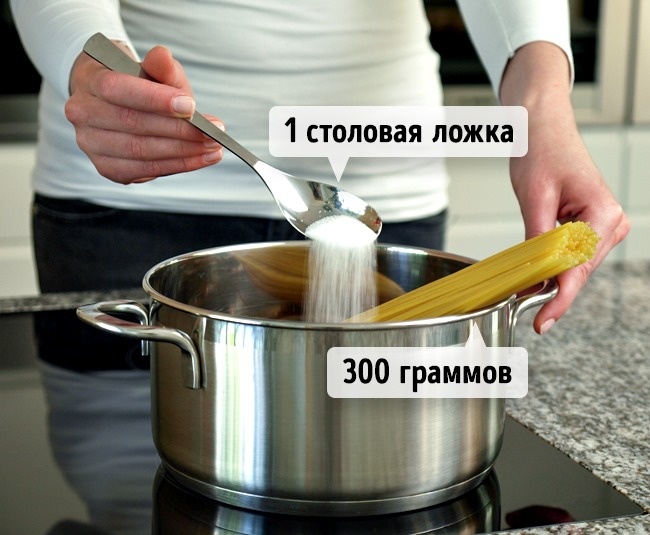 The golden rule when preparing pasta is to salt well the water in which they are cooked. Otherwise, at the exit, you risk getting a tasteless mass, which no sauce will save. If you can not figure out the proportions, then here's the landmark: one tablespoon of salt for 300 grams of pasta. 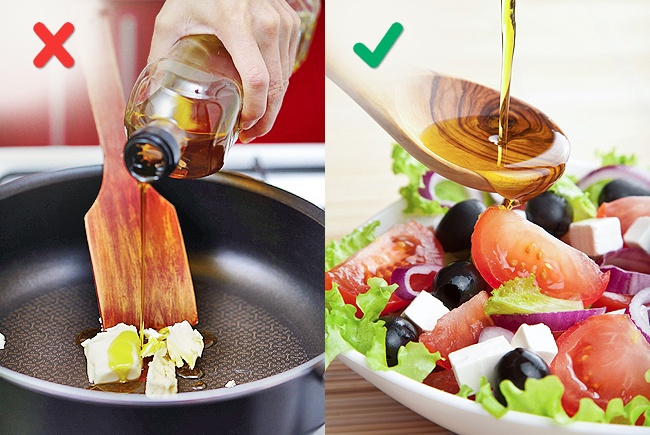 With a strong heating, olive oil loses all its useful properties and begins to burn, which can completely ruin the taste of your dishes. Therefore, leave olive oil for dressing salads, and for frying, use refined sunflower.

Measure the quantity of bulk products with a glass 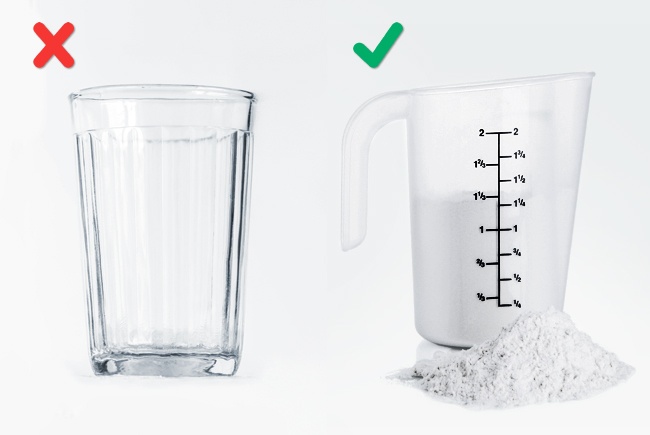 Many of us measure the amount of ingredients for the dough using a faceted glass, while forgetting that it contains a different amount of loose and liquid products. But it is very important for baking to strictly observe the proportions. Therefore, if you do not remember all the tables of measures and weights by heart, it is better to use a special measuring cup or kitchen scale.

It is not enough to heat a frying pan before cooking 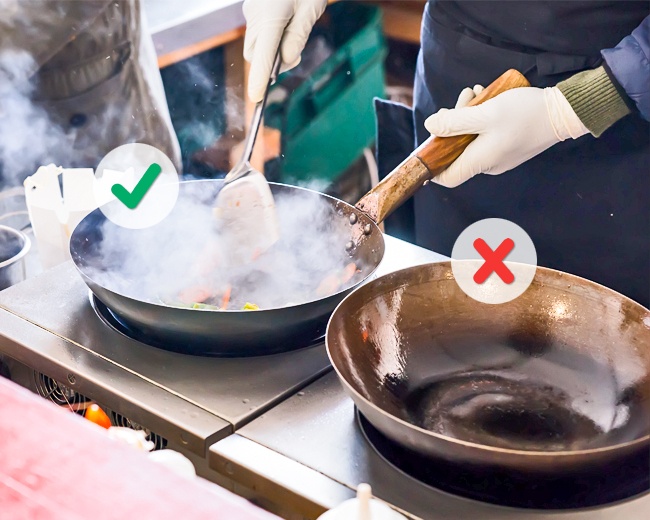 Experienced cooks say: "If you think that the frying pan is already hot enough, then wait another two minutes and only then start cooking." A well-heated frying pan is necessary when frying vegetables and creating the crispy crust on meat. 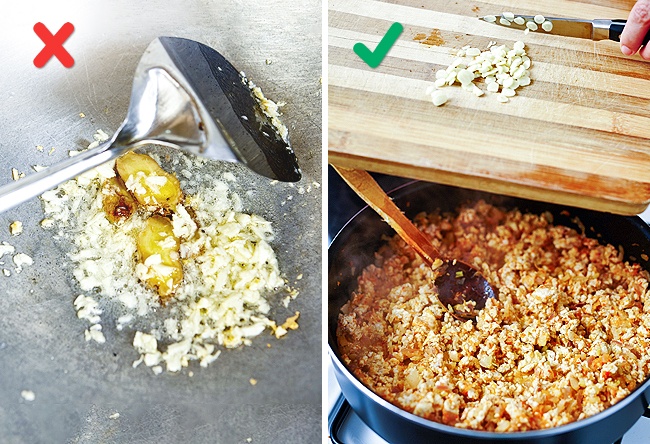 In the recipes of many dishes, it's not for nothing that they say that garlic should be added at the end of cooking or put into a frying pan for 2-3 minutes, and then cleaned. Due to the fact that garlic contains much less water than other vegetables, it burns very quickly and can give unpleasant caustic flavor to dishes.

Put the meat from the fridge right into the frying pan

Before cooking, the meat should be brought to room temperature. So it will heat up more evenly, and you can avoid an unpleasant situation, when everything is ready from the outside, but inside the piece is still damp. The same rule applies to baking in the oven.

Do not let the meat "rest" after cooking 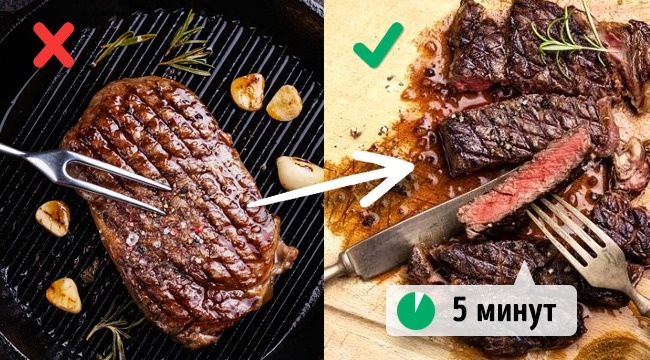 Even if you usually can not wait to try a prepared dish, in the case of meat it is better to wait a couple of minutes before cutting it. So all the juices will be distributed more evenly, and the taste will become more saturated.

Keep all foods in the refrigerator 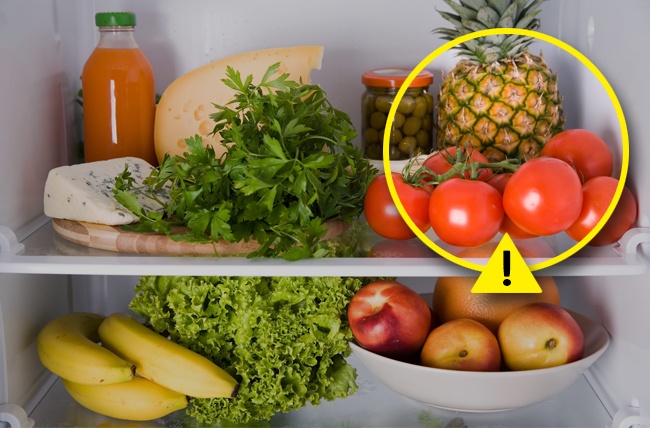 Not all food is well tolerated by cold. Tomatoes, onions, garlic, potatoes, various tropical fruits such as kiwi and mango, as well as zucchini and eggplant are much better in the heat. By removing these products in the refrigerator, you do not prolong their life, but rather spoil them.

Constantly turn over the food 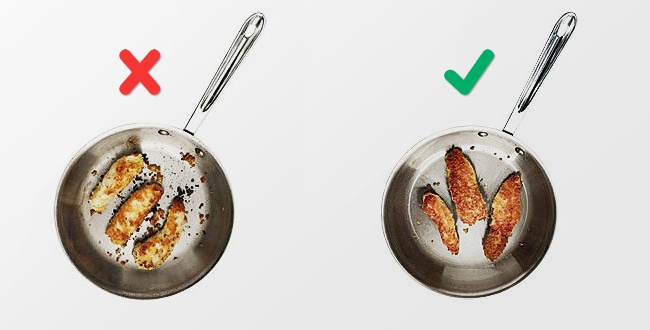 Do not overturn the prepared dish too often, otherwise you will get leaked juice from the meat, breadcrumbs and muffled cereal instead of cheese cakes. Leaving the future culinary masterpiece alone and not disturbing it too often is one of the main principles of a good cook. 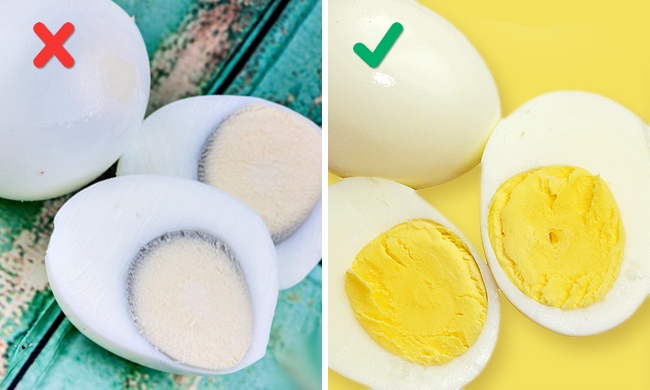 Yolks during the boiling of hard-boiled eggs turn into a substance of gray color, and the proteins taste more like rubber? Do not rush to blame the quality of eggs. Most likely, you simply digest them. To achieve the correct color and consistency, try to remove the eggs from the plate immediately after boiling and leave under the lid in hot water for 10 minutes. So the protein and yolk will reach the right condition at the same time and will not deteriorate.

Tomatoes put in raw potatoes before it is boiled, will forever leave it crispy.

Acid slows the preparation of vegetables, so its products - ketchup, fresh tomatoes and pickles - should be added at the very end.

The attempt to dye eggs in the decoction of tea karkade ended in partial dissolution of the egg shell.

For those who do not know, the decoction of the carcade tea turns out to be sour, and the acid, as is known, dissolves calcium carbonate, from which the eggshell basically consists.

Any sour berries put in milk, curtail it, and it turns out "sour" cocktail.

Instead of the expected color inherent in the currant, the pudding acquired ... a bright green color.

And have you ever tried to put hard cheese such as "Russian" instead of melted cheese in soup?

Now, do not do this.

The cheese will not dissolve and will certainly cling the whole pan from the inside, and it will be very difficult to wash this culinary masterpiece.

The history of this great mistake goes "deep into the ages." The illiterate reprint of the recipe has been multiplied and proved to be tightly embedded in the minds of housewives. The water is introduced into baked goods, since it has the ability to release carbon dioxide when combined with an acidic medium. This most carbon dioxide and loosens the dough. If the natural acid in the test is small, then it must be entered. In this case, the quenching of soda with vinegar before the introduction into the dough is almost meaningless, since the carbon dioxide we need will go away, and we will introduce insoluble salts into the dough - the "residue" of the chemical reaction. The dough will loosen up only if some of the soda does not react. It is more correct to extinguish soda with acid directly in the test.