Health and Medicines ... Our body is imperfect ...

Our body is imperfect 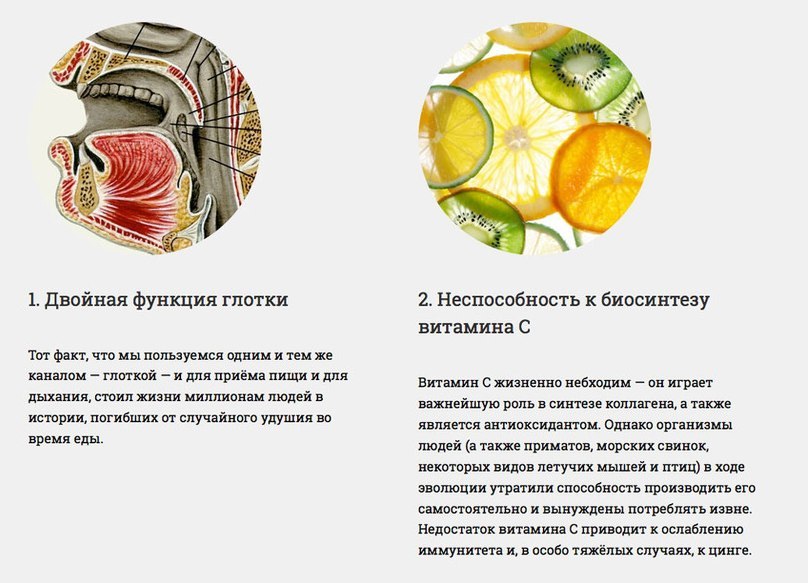 The fact that we use the same channel - the throat - for both eating and breathing, has cost the lives of millions of people in history who died from accidental suffocation while eating.

Vitamin C is vital - it plays a crucial role in the synthesis of collagen, and is also an antioxidant. However, human organisms (as well as primates, guinea pigs, some species of bats and birds) during the evolution have lost the ability to produce it themselves and are forced to consume it from the outside. Vitamin C deficiency leads to weakened immunity and, in especially severe cases, to scurvy. 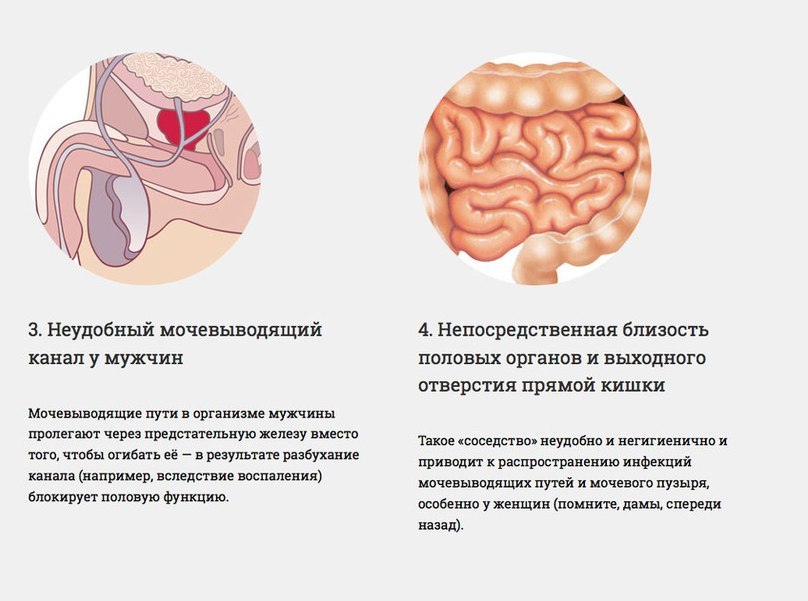 The urinary tract in the body of a man passes through the prostate gland instead of bending around it - as a result, swelling of the canal (for example, due to inflammation) blocks sexual function.

Immediate proximity of the genitals and rectal outlet

This "neighborhood" is uncomfortable and unhygienic and leads to the spread of urinary tract and bladder infections, especially in women (remember, ladies, front to back). 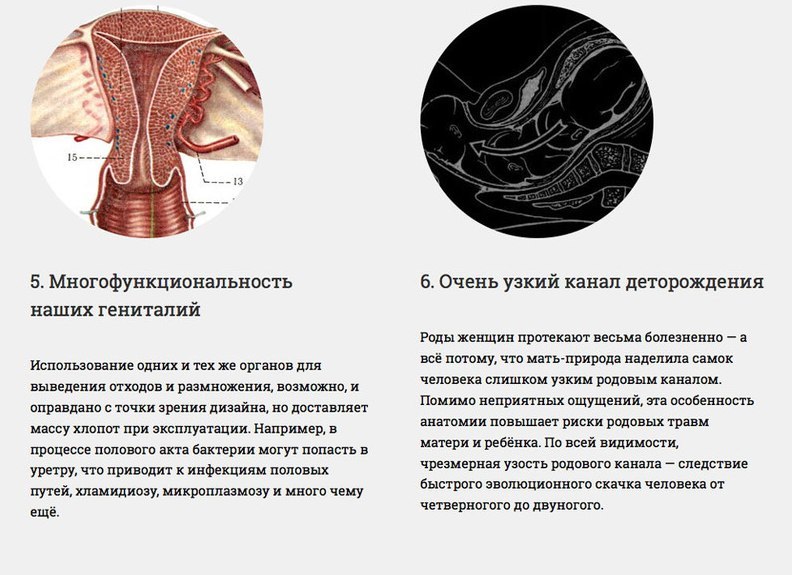 The versatility of our genitals

The use of the same organs for waste removal and reproduction is probably justified in terms of design, but it causes a lot of trouble during operation. For example, during intercourse, bacteria can enter the urethra, which leads to genital tract infections, chlamydia, microplasmosis, and much more.

The birth of women is very painful - and all because mother nature has endowed human females with a too narrow birth canal. In addition to the unpleasant sensations, this feature of anatomy increases the risks of birth injuries of the mother and child. Apparently, the excessive narrowness of the birth canal is a consequence of the rapid evolutionary leap of a person from four-legged to two-legged. 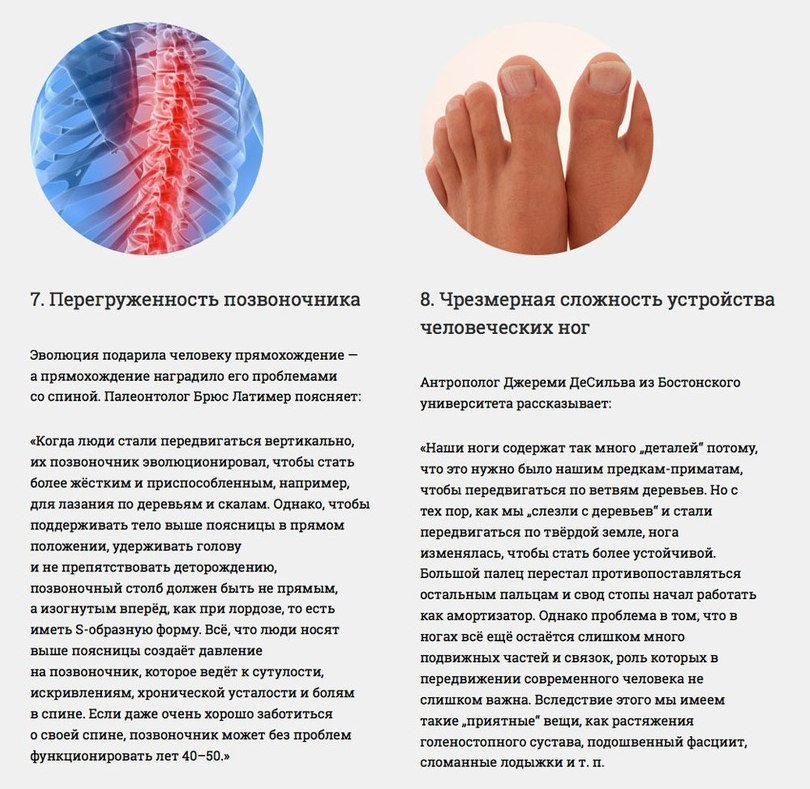 Evolution gave a man upright posture, and upright posture gave him back problems. Paleontologist Bruce Latimer explains: “When people began to move vertically, their spine evolved to become more rigid and adapted, for example, for climbing trees and rocks. However, in order to maintain the body above the lower back in a straight position, to hold the head and not interfere with childbirth, the spinal column should not be straight, but curved forward, as in lordosis, that is, have a 3 shaped shape. Everything that people wear above the lower back creates pressure on the spine, which leads to stoop, curvature, chronic fatigue and back pain. Even if you take good care of your back, your spine can function 40-50 years without any problems. ”

Excessive complexity of the human legs

Anthropologist Jeremy DeSilva of Boston University says: “Our legs contain so many. Details” because our ancestral ancestors needed it to move along the branches of trees. But since we climbed down the trees ”and began to move around hard ground, the foot has changed to become more stable. The thumb ceased to be opposed to the other fingers and the arch of the foot began to work as a shock absorber. However, the problem is that there are still too many moving parts and ligaments in the legs, whose role in the movement of the modern person is not very important. As a result of this, we have such “pleasant” things as ankle sprains, plantar fasciitis, broken ankles, etc. 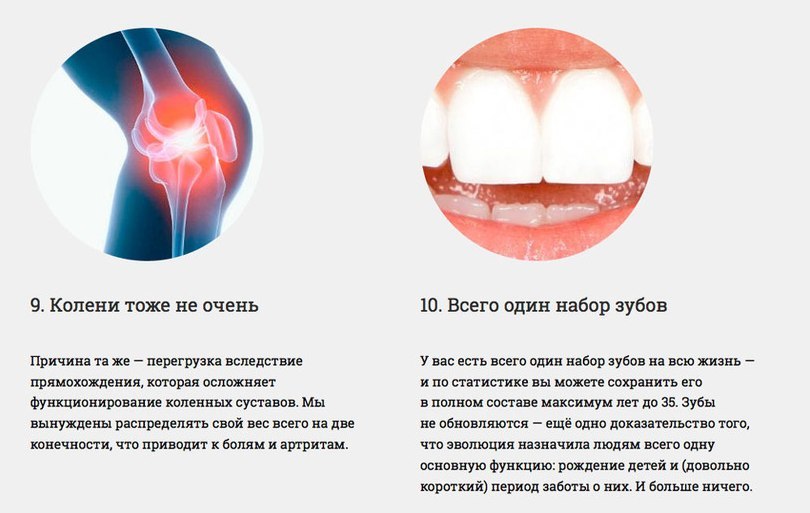 Knees are also not very

The reason is the same - overload due to upright posture, which complicates the functioning of the knee joints. We are forced to distribute our weight on only two limbs, which leads to pain and arthritis.

Just one set of teeth.

You have only one set of teeth for life - and according to statistics you can keep it in full strength for a maximum of 35 years. Teeth are not updated - another proof that evolution has assigned people only one main function: giving birth to children and (rather short ) period of care for them. And nothing more.

Social advertising about a perfect and imperfect body