Antioxidants (antioxidants, preservatives) are oxidation inhibitors, natural or synthetic substances that can slow down oxidation. They are considered mainly in the context of the oxidation of organic compounds.

The most well-known antioxidants are ascorbic acid (vitamin C), tocopherol (vitamin E), B-carotene (provitamin A) and lycopene (in tomatoes). They also include polyphenols: flavin and flavonoids (often found in vegetables), tannins (in cocoa, coffee, tea), anthocyanins (in red berries). 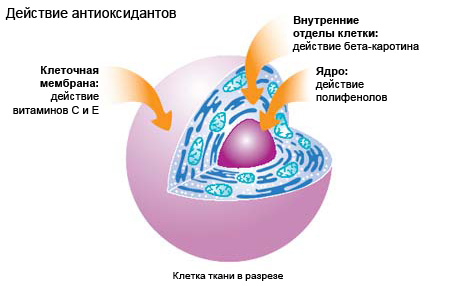 Antioxidants are rich in nuts and some vegetables (beans, feces, artichokes), and in the second case, excessive antioxidants can interfere with the body's absorption of iron, zinc, calcium and other trace elements.

Oxidation of hydrocarbons, alcohols, acids, fats and other substances by free oxygen is a chain process. Chain reactions of transformations are carried out with participation of active free radicals - peroxide (RO2 *), alkoxy (RO *), alkyl (R *), and also active oxygen species (superoxide anion, singlet oxygen). Chain branched oxidation reactions are characterized by an increase in the rate during the transformation (autocatalysis). This is due to the formation of free radicals in the decay of intermediate products - hydroperoxides, etc.

The mechanism of action of the most common antioxidants (aromatic amines, phenols, naphthols, etc.) is the breakage of the reaction chains: the antioxidant molecules interact with the active radicals to form low-activity radicals. Oxidation is also slowed down in the presence of substances that destroy hydroperoxides (dialkyl sulfides, etc.). In this case, the rate of formation of free radicals decreases. Even in a small amount (0.01-0.001%), antioxidants reduce the oxidation rate, therefore, oxidation products are not detected during a certain period of time (inhibition, induction). In the practice of inhibition of oxidative processes, the phenomenon of synergism - mutual enhancement of the effectiveness of antioxidants in the mixture or in the presence of other substances - is of great importance.

Below we present the summary tables of the content of antioxidants in food.

Recall antioxidants neutralize free radicals, which, in turn, are one of the main causes of aging and many degenerative diseases.

Plants are forced to exist in such environmental conditions from which they need to be protected.

For protection, they produce different protective substances, including antioxidants, antioxidants.

Using these plants for food, we also protect our body from free radicals and souring them to the called.

Studies of the presence of antioxidants in food were conducted at the Boston University in the United States.

Two tables are given, because different methods were used to measure antioxidants in products.

We need to pay attention to the fact that with equal amounts of antioxidants we usually eat different amounts of each product.

For example, in some spice there can be as many antioxidants as in beans, but it is obvious that we can eat much more beans, so we should give it an advantage.

In addition, it is important to look at the calorie content of foods.

For example, the amount of antioxidants in prunes is one of the largest, but its caloric value is high - it's better not to abuse it and there is not in addition to the rest of the products, but instead of sweets, rolls, etc.

Summary table of the content of antioxidants in food

Antioxidants in the top 10 antioxidant products per 100 grams