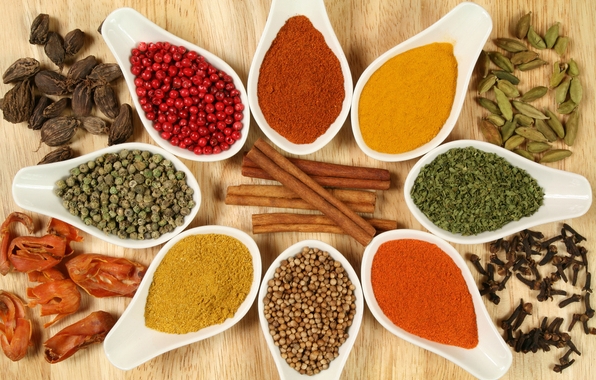 The secret of harmony of Asians lies in the fact that they consume a large number of spices. Spices are added not only to soups, meat and fish dishes, but also to salads and even desserts!

How do spices and seasonings help to lose weight? They break up metabolic processes, making them more intense, burning fats, facilitating the processing of carbohydrates (carbohydrates are converted into energy, not fat).

In this article, what spices and condiments are best for weight loss?

Garlic, mustard, hawthorn, chicory is incredibly useful for the heart.

As shown by the research of German doctors, if you use 2g. Cinnamon daily blood sugar level is reduced by 10%, and the amount of cholesterol - by 13%. Taking cinnamon for weight loss activates glucose metabolism, accelerating it 20 times. And to achieve this result, it is enough to eat only one-fourth of the tea spoon per day.

It is noticed that, getting into the body, cinnamon significantly reduces appetite, and with its regular consumption, you want to eat much less. In addition, cinnamon stimulates intestinal peristalsis due to the special dietary fiber contained in it, and, by neutralizing the pathogenic flora, it removes toxins and toxins from the body. Of course, this will work if you ate cinnamon really with a cottage cheese or an apple, and not with a bun. It also improves the work of the gastrointestinal tract and has an antimicrobial effect.

One of the most effective in combating excess kilograms of recipes based on cinnamon is its mixture with honey. Here is a simple, but useful for digestion honey-cinnamon drink. Pour half a teaspoon of cinnamon with water, bring to a boil, strain, cool and add honey. Drink in the morning and evening before eating.

You can prepare such a fat-burning cocktail: add a little pinch to flavorless kefir cinnamon, ginger and pepper. Each of these components contributes to weight loss, and by mixing them, we will enhance the effect. Such a spicy yogurt will have a beneficial effect on the work of the intestines, activate metabolic processes and help break down the fat.

"Hot" spice warms up not only your kitchen, but your body. Accelerating the metabolism, it helps burn more fat. And you can not take a lot of food, thanks to the spice of seasoning.

The sharpness of chili pepper is not harmful to the stomach. It stimulates digestive enzymes, protects against stomach ulcers.

Ground pepper reduces the level of cholesterol and triglycerides in the blood, reduces the formation of harmful blood clots, which is an excellent prevention of heart attacks.

In addition, chili is a very effective anti-inflammatory against pain. For example: for a headache, arthritis or muscle pain. Also, peppers can release a stuffy nose, improve immunity.

Among dozens of useful properties for health, one of the most interesting for us is its ability to improve digestion and promote the absorption of nutrients in tissues throughout the body. The main component of black pepper is piperine, the one that is responsible for burning taste .. In addition to the ability to cause a "fire in the mouth" piperine can enhance metabolism and burn fat. And thanks to it, important amino acids are absorbed into our intestines and protein food is easier to digest.

But not only in piperine matter. Black pepper is a shock dose of vitamin C (here it is more than in an orange), which lowers the level of cholesterol in the blood and helps to turn glucose into energy.

It is best to add freshly ground black pepper to the dish, which has the highest concentration of piperine.

As in other acute spices in this list, mustard helps increase metabolism and allows burning fat faster in large part due to its thermogenic properties similar to that of hot pepper.

Scientists have found that only one teaspoon of mustard powder can increase metabolism from 20 to 25 percent within a few hours after eating, which leads to an additional burning of 45 calories when consuming 700 calories of food.

In the East, this seasoning is added to coffee or tea, as it is able to reduce the harmful effects of caffeine on the body.

It helps to eliminate toxins, which is important in the process of losing weight.

The main property of turmeric is the ability to detect and kill cancer cells in the body. Turmeric, as well as its derivatives, are part of the drugs to fight cancer.

This spice is an excellent anti-inflammatory agent, reduces inflammation of the brain. It is included in the diet of patients who have suffered a stroke.

Turmeric and its ingredients stabilize the work of the intestines, treat arthritis and ulcerative colitis, is useful in any chronic intestinal disorders.

Cumin is incredibly rich in antioxidants and helps to improve digestion. It stimulates the gallbladder and pancreas, responsible for the production of enzymes for the breakdown of food.

Cumin, like cinnamon, stabilizes the blood sugar level. Thus, it is ideal for diabetics.

He controls the blood glucose, which, as is known, helps to keep body weight under control and minimizes fat deposition in the body.

In addition, caraway seeds are a good source of iron, vitamin C, vitamin A and thus contribute to strengthening the immune system.

She, as well as chocolate, raises the mood, in addition, if you add it to the tea, you will not want sweets, therefore, you will not gain weight.

Vanilla is still considered one of the most expensive spices.

Known around the world as an indispensable tool for nausea, vomiting or motion sickness.

The root of ginger has an antibacterial effect, is an anti-inflammatory agent, ideal for dealing with sore throats, colds, flu. And also helps with coughing, is an effective expectorant.

It is a powerful anti-inflammatory drug, relieves pain and swelling in arthritis, reduces muscle soreness.

Ginger is also useful in the fight against cancer, lowers cholesterol, prevents the formation of blood clots, which can lead to a stroke or heart attack.

Scientists have proved that this seasoning also does a good job with excess calories.

This is due to a bouquet of spices that make up its composition: ginger, cardamom, cloves, black and sweet pepper, cinnamon, nutmeg, azhon, turmeric, coriander and red pepper.

Many of these condiments in themselves help to lose weight, but in combination - it's just a bomb.

These seasonings help not to store fat in the body.

In dentistry, cloves are used to relieve toothache. And the smell of this spice promotes the development of creativity.

Spice is useful in respiratory diseases, such as asthma, chest tightness, and other respiratory infections.

Rosemary stimulates the gallbladder, improves digestion. It is ideal for bodybuilders to build muscle mass.

The oil of this herb has a powerful antibacterial, antifungal and antiviral properties.

Used in medical cases for the treatment of various bacterial and fungal infections.

It also treats internal and external inflammation, provides relief from allergies without side effects.

Thyme is an active substance, it is often used in the treatment of bronchitis, sore throats, chest tightness, laryngitis, asthma.

Thymus has a beneficial effect on the work of the stomach, reduces indigestion, is a preventive agent for gastritis.

"Spices for weight loss" from the transfer Live Zdorovo