Human antibodies of a wide spectrum of action against HIV reduce the concentration of the virus in the blood to an indistinguishable level. Such an effect science observes for the first time - true, so far only in experiments on monkeys.

In AIDS patients, there is only one hope - antiretroviral therapy, which is based on drugs that prevent the reproduction of HIV. The genome of this virus is recorded in RNA, so after entering the cell, it uses a reverse transcriptase enzyme to make a DNA copy on the template of its own RNA. Then, with this DNA, the cell's own proteins begin to stamp viral RNA. If, say, suppress the work of reverse transcriptase of the virus, then it will not be able to reproduce.

But even cocktails of antiretroviral drugs help to only transfer the disease from acute to chronic phase. Such therapy can not do anything with a virus that swims in the blood or is in a cage in a dormant state. Therefore, researchers are looking for a way to get rid of the virus itself, and not just suppress its ability to reproduce. (By the way, conventional anti-HIV therapy theoretically allows you to get rid of the virus, but only under special conditions, and such cases, alas, are rare.) 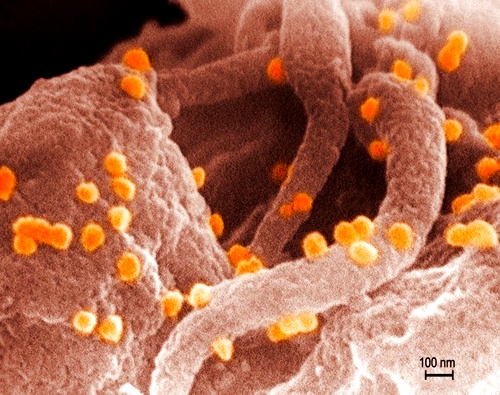 When it comes to completely banning HIV, everyone agrees that it is better not to find antibodies here. On the one hand, everything is simple here: it is enough to find immunoglobulins that recognize the protein of the viral envelope, communicate with it and signal to immune killer cells that this complex needs to be destroyed. The problem, however, is that HIV has tremendous variability, and antibodies usually catch only a certain proportion of viral particles, because the same protein is endowed with a number of differences, due to which the antibodies do not see it.

However, our immunity is still able to cope with such a variety of the virus, creating antibodies of a wide spectrum of action. The fact that immunity can produce immunoglobulins, recognizing more than 90% of the varieties of HIV, scientists discovered in 2010, and this discovery, of course, gave everyone the hope that AIDS is about to fall. But eventually it became clear that such antibodies are rare and in a huge period of time, moreover, only in response to a real infection - that is, to provoke their synthesis with a vaccine from the killed pathogen will not work.

Nevertheless, scientists continued to work with similar antibodies. And not so long ago, it was possible to detect universal antibodies that appear much earlier and look simpler than those that were observed before - true, and their universality was lower. But is it necessary to force the immunity itself to produce such antibodies? As shown by the experiments of two research groups - from the medical center of deaconess Beth Israel and the National Institute of Allergy and Infectious Diseases (both US), - broad-spectrum immunoglobulins simply injected into the blood effectively lower the level of HIV. 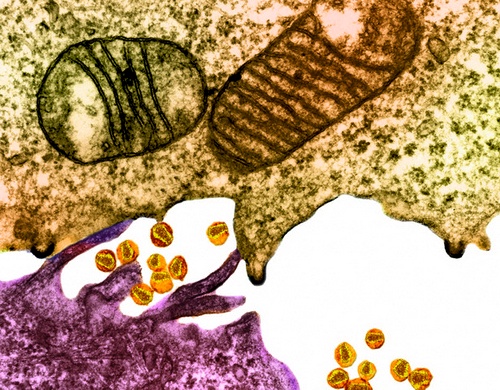 HIV between the epithelial cell (from below) and the lymphocyte (from above) (photo Visuals Unlimited / Corbis).

It's worth mentioning that the groups of Dan Barouch and Malcolm Martin experimented with monkeys: the rhesus was infected with a hybrid monkey-human HIV virus that multiplied in macaques, but looked like a human virus. The weapon against it was antibodies of a wide spectrum of action, received from patients with AIDS.

Dan Baruch and his colleagues used a cocktail of three kinds of antibodies, and, according to researchers in Nature, within a week the level of the virus fell so much that it could not be detected! A similar result was observed when only one species was used instead of a mixture of immunoglobulins. After the content of such antibodies in the blood began to decrease, the concentration of the virus rose again, but in some monkeys it still remained indiscernibly low even without the introduction of additional portions of antibodies.

In another work done by Malcolm Martin and his colleagues (and published in the same journal), it is about the same, only here the researchers used different versions of antibodies against HIV. Again, the concentration of the virus fell in the macaques for seven days to indistinguishable (once again: indistinguishable!) Level and remained so for 56 days, until the antibodies themselves began to disappear. Further all depended on how much the virus was in monkeys initially: if it is not enough, after the disappearance of antibodies the virus remained under the control of its own immunity of animals, if it initially was a lot, then the level began to grow.

At the same time, as the researchers emphasize, the virus disappeared from both the blood and other tissues, and it did not appear to be resistant to the antibodies introduced. (However, there was one exception: when in the second study only one antibody was administered, and the macaque was tested with a 3-year experience of cohabitation with the virus, it had a stable viral strain.)

In both cases, scientists did not process the virus with human antibodies for too long, because they feared that the immune system of monkeys would start to resent against foreign immune proteins, and perhaps this was the reason that in most cases the virus was restored. That is, it is not yet clear whether this effect can be made "long-playing". All this will be revealed only after clinical trials; As for the results described above, it is possible to understand the researchers' enthusiasm: for the first time in a living organism, the level of viremia could be reduced so much (alas, previous experiments with antibodies that were put on humans and mice had very inexpressive results).

What's next? The cost of antibodies is much higher than antiretroviral drugs, and it's more difficult to handle them. But the authors of the studies believe that such antibodies should be combined with conventional anti-HIV drugs: this will reduce the cost of treatment, and, most likely, increase its effectiveness - if antibodies are also added with substances that prevent the virus from multiplying in the cell.

Prepared from materials and .