Earlier we described various types of hands, determined by the structure and shape of the fingers as a whole; Then we talked separately about the thumb, now we turn to the description of other specific fingers. The length of the fingers can be determined by comparing it to the back of the palm. Put your hand - best left - horizontally with your palm down, squeezing your fingers, and pay attention to the joint, whereby the ulna connects to the wrist. Measure the distance in centimeters and millimeters from the center of this bump to the knuckles of the middle finger. It will be a measure in determining the length of the fingers.

Method of measuring the hand

Place your hand on a sheet of paper with your palm down and carefully circle its outline with a pencil. Now place the tip of the pencil between the ring finger and the little finger, near the base of the pencil, and put a point. Through it, draw a horizontal line, strictly perpendicular to the fingers. Then back down on the width of the little finger (measuring it with a compass) and draw a line parallel to the top. This will be the main line from which to measure the length of the fingers. The overall degree of their length is derived from comparing the length of the middle finger with the length of the back of the hand. 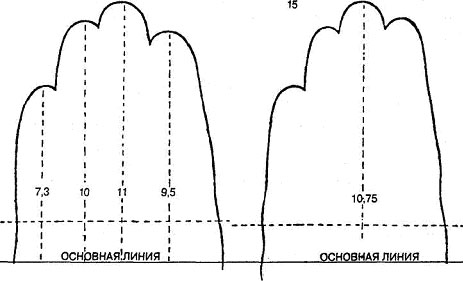 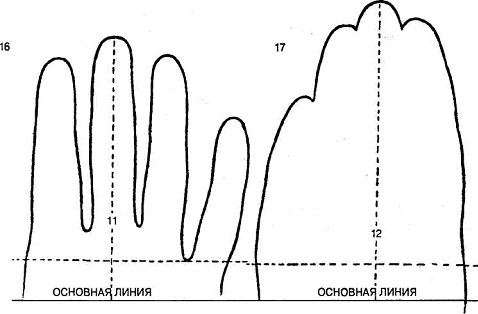 Long fingers mean a critical and analytical mind, weakly susceptible to outside influence and not making decisions hastily (but further, in the subsection "ring finger", it refers to exceptions). In love affairs, such people are somewhat unstable, they are hard to please. Very long fingers are associated with dishonesty and the desire for profit. Such people are often indiscriminate in their means.

Short fingers mostly indicate a gusty temper; Such a person rather follows the dictates of the heart than the mind (but further, in the subsection "ring finger", refers to exceptions). To a large extent, this leads to a disregard for conventions - often this is expressed by the fact that a person wears unusual, provocative clothing. Extremely short fingers indicate a primitive, undeveloped type of person, although in this case, of course, you should pay attention to other signs.

Straight and closely spaced fingers - unless other signs are contrary to these conclusions - indicate stiffness and intolerance. Their owner pays too much attention to formalities and conventions. Fearing to do something unseemly or unusual, he often refrains from the small manifestations of kindness and generosity to which his heart calls. Since he can blindly follow the precepts of religion or morality, it is difficult to deal with.

Fingers, set wider, indicate an open temper. If the fingers of the palm are clearly separated from each other, this indicates the ease of character - this person is generous, he is not afraid to test new roads. Uneven, but not twisted fingers, speak of versatility and adaptability, of a propensity for art, although here one should also look at the thumb and palm lines. Twisted fingers are an ambiguous sign, often with an unfavorable value.

As for the compliance or inflexibility of the fingers, this is interpreted in the same way as in the case of the thumb. It should be remembered that different parts of the hand often talk about the same, only to varying degrees and with different details, so that in order to get the whole picture, one must take into account the most diverse features that complement each other. The main starting point is the type of arm, then the thumb and after it other fingers in general.

Now go to the specific fingers; Their interpretation, however, is not so important as the interpretation of the features described above.

Forefinger. If it is short, it indicates some carelessness and unwillingness to take responsibility. Such a person would rather work for a fee than be a master of himself. A long finger indicates a powerful nature and a propensity for leadership. If very long - equal to the middle finger or only slightly shorter than it - then indicates impatience and arrogant intolerance to the opinion of others.
The reader should remember that the owner of a normal finger (four fifths of the average) is distinguished by an average degree of ambition, an initiative and a moderate entrepreneurial spirit.

Middle finger. If it is short, then its owner is impulsive and inadvertent. The heart controls the head very much and inclines it to inconsistent actions; The decision is made solely according to the emotions of the moment, and the judgments of such a person rarely have a rational basis. It's easy to make him laugh or make him cry, he's kind and generous, and it's nice to talk to him.

The elongated middle finger indicates greater caution and caution, about the influence of the mind. His possessor can attach great importance to his personality, sometimes even be an introvert, come into a bad mood. A normal middle finger speaks about the moderation of judgments, about sanity and foresight.

Unnamed finger. The normal length of this finger is nine tenths of the length of the middle finger. In this case, it means love and critical perception of art and beauty in life, also a tendency to take risks in business and go for speculation.
If it is long, it indicates a passion for gambling, a tendency to make high stakes, either on the exchange or at races. Its owner can put everything at stake for the sake of a dubious business enterprise, and since this sign indicates also optimism, then his hopes are more rosy than it should be. The usual course of life is not for him; He wishes to live it with brilliance, even for a short period of time. A long ring finger can also indicate interest in art. The short finger says that there is no desire to risk, insufficient business acumen and undeveloped enterprise. In doubtful cases, he tends to be overly cautious.

Little finger. The normal length (seven-tenths of the middle finger) speaks about adaptability, tact, resourcefulness in various difficult circumstances and points to an active mind. A short finger indicates a hasty and impetuous person who easily quarrels with potential friends, expressing ill-considered comments and criticizing them.
A person with a long little finger is usually endowed with personal magnetism, has a great influence on others, often has the gift of leadership. He demonstrates these qualities for the benefit of others or simply uses them for his own purposes, can be determined from the analysis of the thumb and the hand as a whole.

NAIL HANDS
Nails are formed from skin tissue, from the most delicate part of the flesh. It is noteworthy that in people of mixed blood this fact can be detected by nails. Even if for several generations in the family there were only Europeans, nails can tell about the African or Indian origin. They also talk about diseases. For example, pressing inwards for indigestion; Flattened fingertips also indicate this disease. It is known that during poisoning some poisons accumulate under the fingernails and their presence can be determined by performing a chemical analysis.

Stretched nails indicate a calm, phlegmatic temperament; Short - about a more impulsive character. If the nails are developed normally, with a semicircular base and a clear sickle-like mark in it, then one can expect a balanced character and sensible judgments. Broad and rounded tips in combination with previous signs indicate openness, generosity and sincerity. Narrow, elongated nails are found in people with unimportant health, often from lack of blood they are pale or bluish. If there are no signs indicating the disease, then the elongated and moderately narrow nails speak of refinement and idealism. Shovel-like nails, especially excessively broad in comparison with their length, speak of pugnaciousness and ardor. If they are reddish, then these qualities are enhanced.

Normal nails should be pinkish or reddish, not pale and not bluish. Nails with scars or grooves usually suggest nervousness, although they can only mean a sensitive mind. Any violation of shape or color indicates a disease. For example, blue speaks of a malfunction in the circulatory system. Nails are of secondary importance in character determinations compared to fingers, but they can somehow clarify about health or temperament.