As expected, today at the WWDC 2012 conference Apple announced the next generation of iOS mobile platform for iPhone, iPod touch and iPad. Download iOS 6 (build 10a5316k) can be registered developers from today.

IOS 6 for iPhone, iPad and iPod touch offers about 1500 new APIs for developers, as well as more than 200 new features, including three-dimensional maps, improvements to the Siri voice assistant and the Safari mobile browser, the Passbook application.

IOS 6 supports FaceTime video chat via cellular networks (previously the service worked only over Wi-Fi), and the Common Photo Stream feature allows you to easily share photos with your friends.

On what devices does the system work? Users of the fourth generation iGadgets can breathe a sigh of relief. IOS 6 supports iPhone 4S, iPhone 4, iPad 2, iPad 3, iPhone 3GS and iPod touch 4G. The rumor that the OS will not launch on the iPad 1 and iPod touch 3G, unfortunately, was confirmed. Release of the public version of the new platform is expected in the autumn of this year, simultaneously with the next generation iPhone.

Download iOS 6 for iPhone, iPod touch, iPad and Apple TV, as well as any other beta release, can only authorized developers participating in the programs iPhone Developer Standard or Enterprise Program. If you are a developer, then you can download iOS 6 today via iOS Dev Center from here . 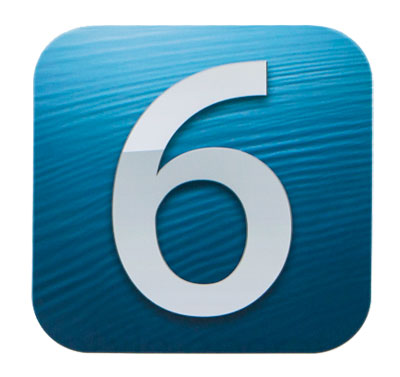 Apple announced the next generation of mobile operating system - iOS 6. The presentation was part of the WWDC conference, which kicked off in San Francisco on June 11. IOS 6 for iPhone, iPad and iPod touch contains more than 200 new features.

Features of iOS 6 for iPhone, iPod touch and iPad

About the fact that Apple plans to abandon Google maps in iPhone smartphones, iPad tablets and iPod touch media players, replacing them with its own mapping application, it became known in early May. The new maps in the operating system iOS 6 used a revolutionary three-dimensional viewing mode based on technology company C3 Technologies, which Apple bought last year.

Due to the local situation, users can see traffic congestion - infoparts (a connection to Yelp is stated). The company is also working on its own voice navigation. In this case, the prompts pop up on the lock screen - there's no need to keep the application open. Of course, with the cards is connected Siri. 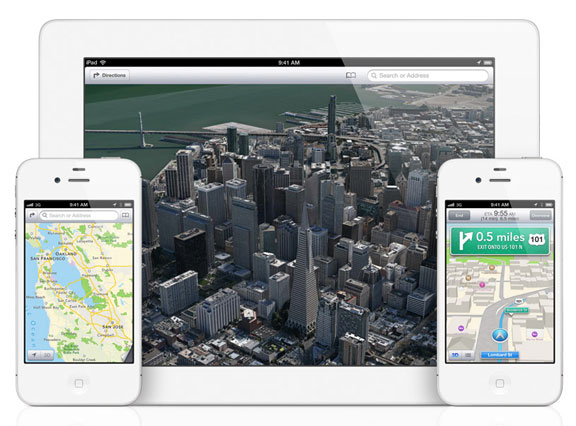 In iOS 6, Siri's voice assistant has new features: the function has learned to work with the schedules of cinemas, can answer questions about sports (during the presentation the program was able to answer the question about which of the two basketball players is higher). With the help of Siri, users will be able to "slander" messages on Twitter, and also launch voice applications.

In addition, Apple has signed agreements with a number of automakers, including BMW, Mercedes, Land Rover, Jaguar, Audi, Toyota, Chrysler and Honda. They will build in their cars a button for calling the voice assistant. The button will be located on the handlebars. 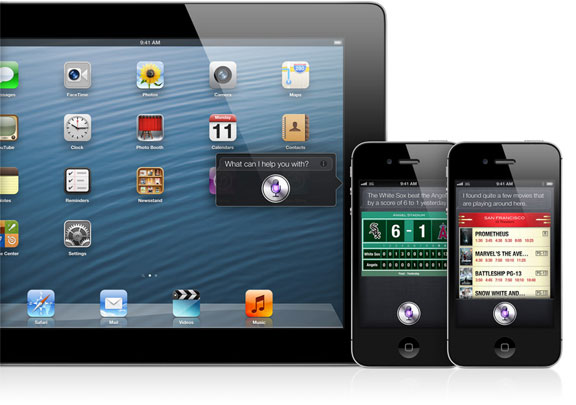 IOS 6 implements the long-awaited support for FaceTime video chat for cellular networks (previously the service worked exclusively through Wi-Fi). Unite subscribers Apple plans on the basis of Apple ID and their phone number, and iPhone users can communicate with users of the iPad or Mac via the cellular channel. 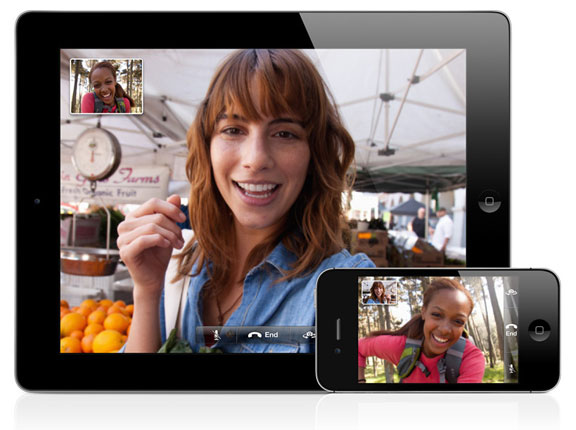 A new Passbook application is created to merge necessary documents as they are created in different applications or Internet services. The application can store electronic tickets to the cinema or on the airplane, discount coupons or other digital data. Users can associate documents in terms of meaning, location and other parameters. 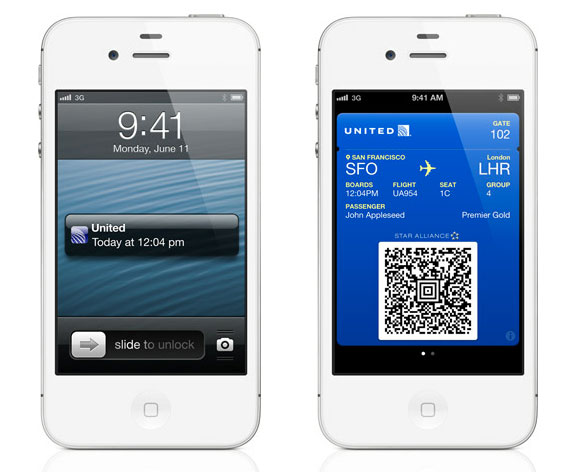 Browser Safari in iOS 6 is significantly redesigned. Firstly, there appeared cloud tabs iCloud Tabs. The service allows users to view the list of open tabs on phones, tablets and computers. A key feature of this feature is transparent synchronization between iPhone, iPad, iPod touch and Mac. For example, if you work on a mobile device, and then switch to a PC, then you can see all the open tabs and if you want to call any of them. 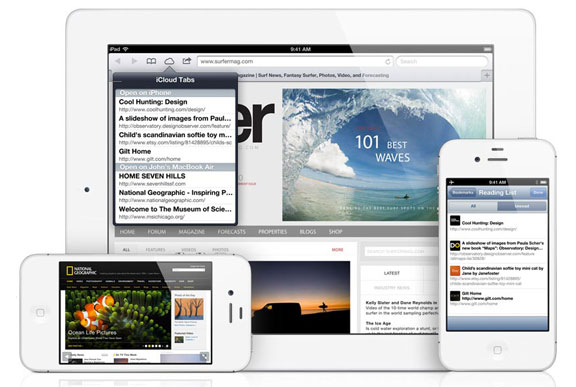 In addition, the offline section Offline Reading List is implemented, where the pages for reading without the Internet are cached, the function of uploading photos to sites like Shutterfly and resources from Smart App Banners. If the page specifies a link to the App Store, then a notification will pop up that the program can be downloaded from the store. In the horizontal orientation of Safari, full-screen mode is possible. It was easy to share photos by means of the Common Photo Stream function.

Another function of the OS X 10.8 desktop platform, which appeared in iOS 6, is known as Mail VIP. Using this feature, iPhone and iPad owners will be able to receive emails from important recipients already marked with an asterisk. The users selected in this way will be synchronized via the iCloud service between the iPhone, iPad and Mac. 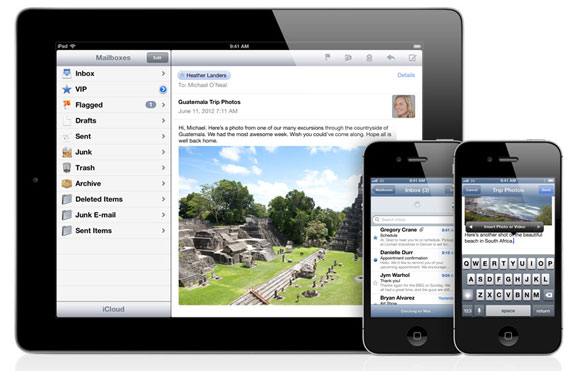 Another innovation in iOS 6 is called "Do Not Disturb" (Do Not Disturb). In this mode, the operating system OS X Mountain Lion stops displaying pop-up informational banners of the Notification Center. The special "Do Not Disturb" switch is located in the main section of iOS 6 system settings. 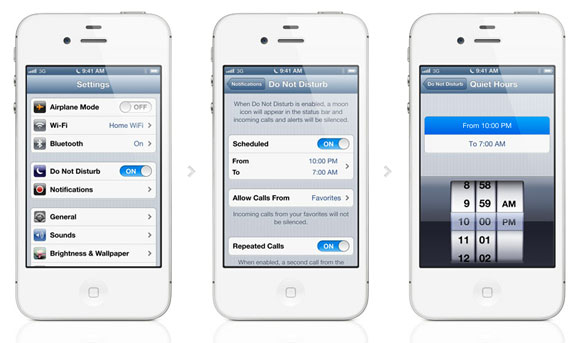 Apple said that it worked very closely with Facebook on the deep integration of the social network into the mobile OS, so that users can now write to the service directly from a variety of applications. The same level of deep integration is available for Twitter. In iOS 6, users will be able to receive notifications from Facebook through the regular OS notification system, and Facebook's memorable dates will appear on the mobile device calendar.

Also, the new mobile OS has improved the ability to answer a call when you are busy: you can answer with a few standard touches with a standard SMS-call, or ask the system to remind you of the call later.

New in iOS 6.0 is also the system of restrictions for children, which can limit the ability of the smartphone to work with one application and exclude the risk that the child will open an application that is not intended for him.

On what devices does the system work? Users of the fourth generation iGadgets can breathe a sigh of relief. IOS 6 supports iPhone 4S, iPhone 4, iPad 2, iPad 3, iPhone 3GS and iPod touch 4G. The rumor that iOS will not launch on iPad 1 and iPod touch 3G, unfortunately, was confirmed.

Download iOS 6 beta 1 can registered developers from today. The public version of the operating system will be available this fall.