Ultra-detailed maps of the lunar surface became available to all

The moon is a natural satellite of the Earth. The planet's closest satellite to the Sun, since there are no satellites near the planets, Mercury and Venus closest to the Sun. The second brightest object on the earth's firmament after the Sun and the fifth largest natural satellite of the planet of the solar system. The average distance between the centers of the Earth and the Moon is 384 467 km (0.002 57 AU, ~ 30 diameters of the Earth). The apparent magnitude of the full moon in the sky is 12.71m. The illumination created by the full Moon near the surface of the Earth in clear weather is 0.25 - 1 lux. The moon is the only astronomical object outside the Earth, which man visited.

Scientists from the US Geological Survey, together with NASA specialists, compiled two very detailed lunar maps .

The maps are based on data obtained with NASA's Lunar Reconnaissance Orbiter automatic interplanetary station. 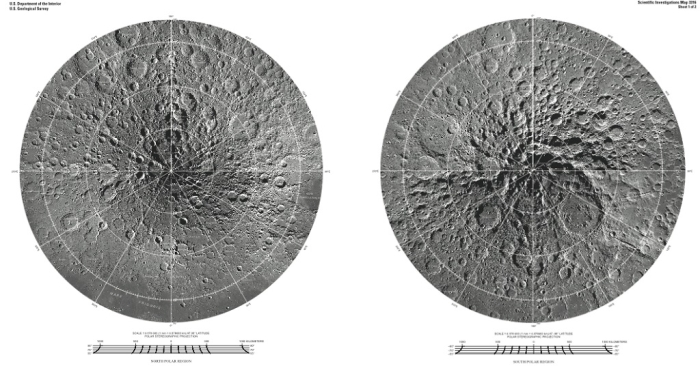 On the map, composed of images of a wide-angle camera located on board the probe, all objects with a size of more than 85 kilometers are indicated. In ultra-high resolution ( 245 MB ) the card can be downloaded here .

Sheet 1: This image mosaic is based on data from the Lunar Reconnaissance Orbiter Wide Angle Camera (WAC; Robinson and others, 2010), an instrument on the National Aeronautics and Space Administration (NASA) Lunar Reconnaissance Orbiter (LRO) spacecraft (Tooley and Others, 2010). The equatorial WAC images were orthorectified onto the Lunar Digital Terrain Mosaic (GLD100, WAC-derived 100 m / pixel digital elevation model; Scholten and others, 2012) while the polar images were orthorectified on the lunar LOLA polar digital elevation models (Neumann and Others, 2010). The Mercator projection is used between latitudes ± 57 °, with a central meridian at 0 ° longitude and latitude equal to the nominal scale at 0 °. The Polar Stereographic projection is used for the regions north of the + 55 ° parallel and south of the -55 ° parallel, with a central meridian set for both at 0 ° and a latitude of true scale at + 90 ° and -90 °, Respectively. All named features greater than 85 km in diameter or length were included if they were not visible on the map. Some selected well-known features less than 85 km in size were also included. For listed references, please open the full PDF. 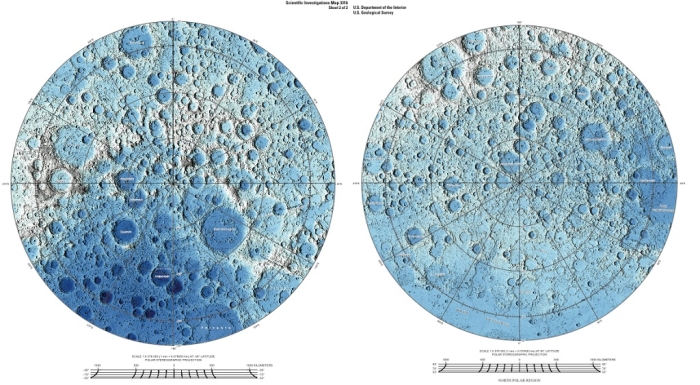 The topographic lunar map is made up using a laser altimeter; At its formation more than 6,5 billion measurements made for the period from 2009 to 2013 were used. In ultra-high resolution ( 461 MB ) the card can be downloaded here .

Sheet 2: This map is based on data from the Lunar Orbiter Laser Altimeter (LOLA, Smith and others, 2010), an instrument on the National Aeronautics and Space Administration (NASA) Lunar Reconnaissance Orbiter (LRO) spacecraft (Tooley and others, 2010 ). The image used for the base of this map represents more than 6.5 billion measurements collected between July 2009 and July 2013, adjusted for consistency in the coordinate system, described below, and then converted to lunar radii (Mazarico and others, 2012). For the Mercator portion, these measurements were converted into a digital elevation model (DEM) with a resolution of 0.015625 degrees per pixel, or 64 pixels per degree. In projection, the pixels are 473.8 m in size at the equator. For the polar portion, the LOLA elevation points were used to create a DEM at 240 meters per pixel. A shaded relief map was generated from each DEM with a sun angle of 45 ° from the horizontal, and measured by sunshine from 270 °, as measured by clockwise from north with no vertical exaggeration. The DEM values ​​were then mapped to a global color look-up table, with each color representing a range of 1 km of elevation. For this map sheet, only larger feature names are shown. For references listed above, please open the full PDF. 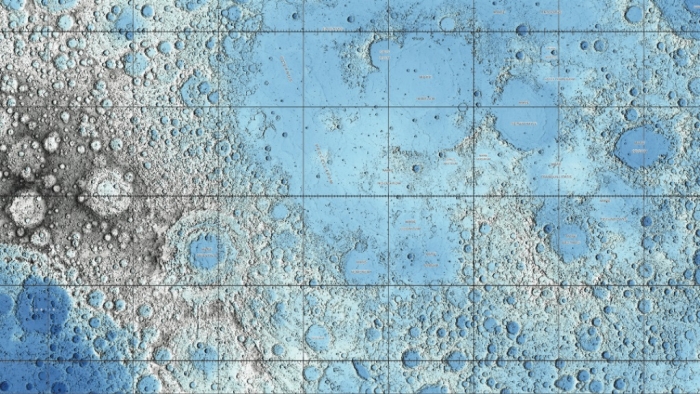