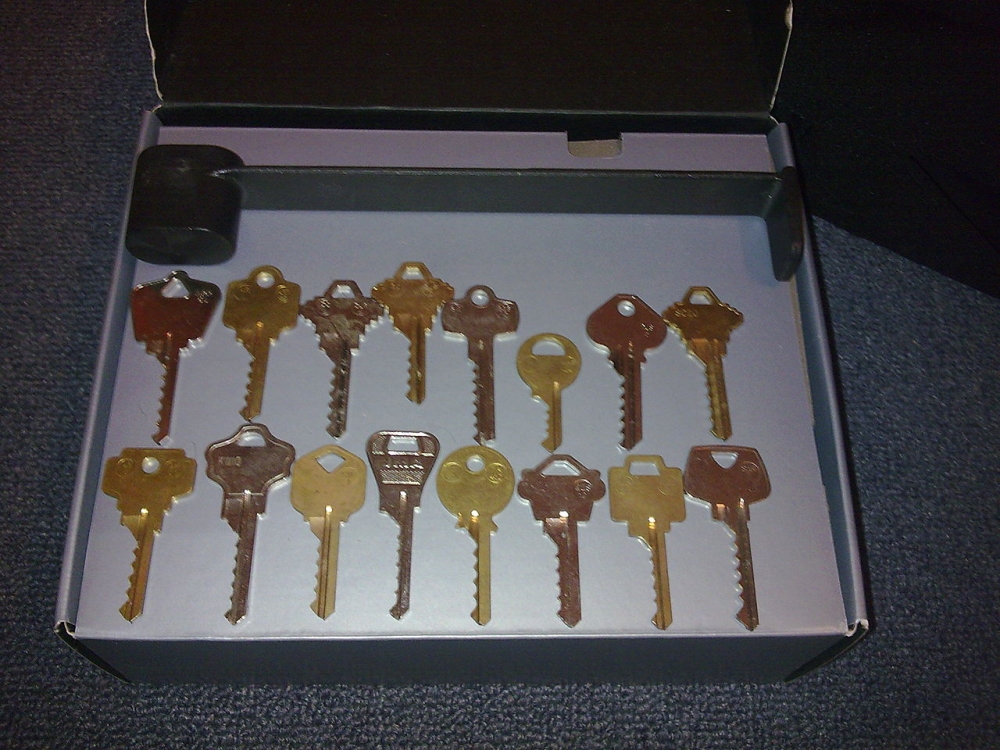 Bumping (from English bump - impact, push, collision) - the method of opening the locks, based on the transfer of kinetic energy to the pins due to blows on a specially machined key. The pins are chaotically thrown, and by turning the bumping key at the right time, you can open the lock. This method of breaking does not leave visible traces and works on tumbler-pin systems and locks with vertical milling of the secret.

Bump - bumping , opening the lock with strokes. And what is your castle?

The term "bumping" comes from the English word "bump" , which means "knock, kick . " The name very accurately describes the method of hacking: one sharp blow - and the door is wide open.

Virtually any cylinder lock, including the Mul-t-lock, can be easily opened using bumping , also known as the percussion method. The method is based on the fact that when it hits the top pin, it transfers the impact energy to the lower pin while remaining in place. At the moment of impact, the cylinder must be momentarily given a torque.

To understand how this happens, it is necessary to recall how one of the most popular locking mechanisms in Russia is built-a pin cylinder lock, which is also often called English. The heart of such a castle is the core. It is he, rotating, activates the bolt (the same metal "tongue" that "opens" and "closes" the door).

To the cylinder was able to "learn" the native key, vertical channels are drilled in it, in each of which two pins are inserted into the strictly defined position - code and lock (in other words, blocking). When the lock is opened with its "own" key, its teeth (or, as they say, professionals, "secrets") align the pins in the correct order horizontally and vertically, the key turns, the cylinder rotates and the door opens.

If at least one "secret" of the key differs in size from the desired one, the pins do not line up in the correct order, and the lock remains closed. That's why you can not open two locks of a similar model with the same key. Before the "bumping" was invented , the criminals had a hard time: to open the pin lock, a large set of skeleton keys, a serious experience, sensitive fingers and a lot of time were required ...

The invention of bumping in the middle of the last century in Europe greatly facilitated the professional life of "housekeepers". The perpetrator inserts a harvested "dummy" into the keyhole and sharply beats it with a small hammer or even a wooden brush. Bump-key hits the coding pins, causing the blockers to jump in random order. In one of the fractions of a second chaotic bouncing pins come to the right position, the offender turns the "pseudo-key" and the door opens.

To open a simple lock, the apartment thief sometimes has a thin steel wire, for more complex models, blanks are produced that "in general terms" resemble a real key (to create them, they often "refine" the keys of the same type of locks, slightly shortening them and deepening the "cutting"). . Such blanks in Russia are called bump-keys or "golden clasps".

Depending on the complexity of the lock and the quality of the bump-key, the opening time of the door is from 5 seconds to 5 minutes. And not so long ago, criminal craftsmen automated the hacking process by creating a pick gun, a "gun" type tool that strikes a series of strokes on code locks, making the hacking procedure even quicker and easier.

The opening of the profile cylinder Mul-T-Lock Classic

The practical application of some of the materials posted on this site may be illegal. All information of this kind is intended solely for informational purposes; Authors and distributors are not responsible for its illegal use.
Materials are taken from books, magazines, other sources, bought in e-shops, received by exchange. Provided are "AS IS" ("AS IS"); Check the performance of each is not possible. The site www.shram.kiev.ua works, rather, as a paid search system for interesting materials.
There are no materials on sale that contain warnings about the prohibition of its distribution (paid or free of charge). If you notice a copyright infringement (the sale of the material, for free distribution and sale of which its author did not give permission) - report, the material will be removed.