Electricity and Gas ... How to reduce costs of ...

How to reduce the car's appetite and reduce gasoline costs

How to properly operate the car and not spend extra money at gas stations, the specialists of the concern General Motors .

How not to spend extra money at gas stations.

Since December last year, the cost of gasoline at Ukrainian gas stations has steadily increased and the issue of fuel economy has become relevant for many. About how to properly operate the car and not spend extra money at gas stations, experts told the concern of General Motors.

GM specialists also reminded that excess acceleration and braking increase fuel consumption by 33% when driving on highway and 5% in the city, and every 15 minutes idle idle time they "eat up" about 0.9 liters of fuel. 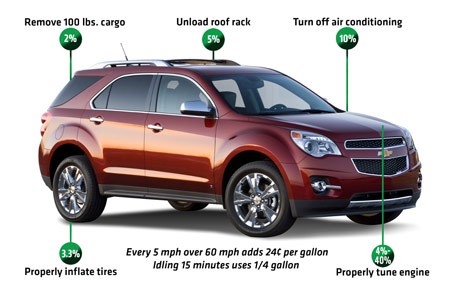 Pay for the "gas" during a trip to the sea can be much less - sometimes twice. But in the city, savings can be significant. 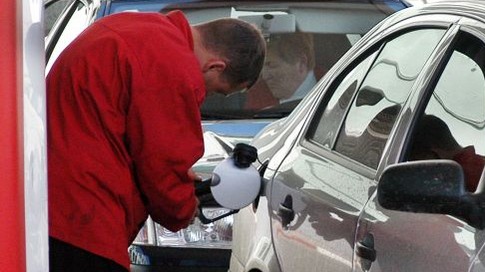 You gathered in the Crimea on your own car, but then the gasoline again "jumped" by ten percent? Do not worry: "Today" will tell you how, not particularly straining, to reduce fuel costs by 20%. By the way, it's safe to drive and ride safely - in most cases the same thing! 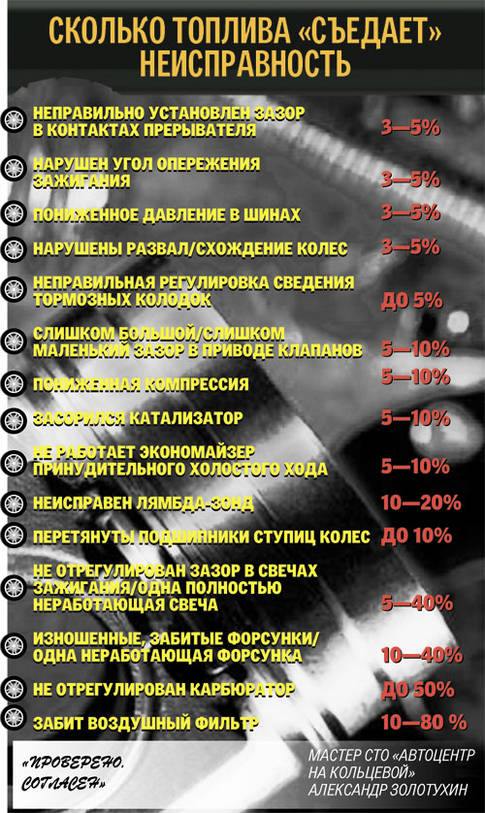 First of all, remember: you can save fuel only on a fully serviceable car. Any trifle, any malfunction can significantly increase the flow. Even such "nonsense", as an occasional thawing candle, can "eat" extra two or three liters on the tank. And in the end, you "do not get there" is not at all superfluous 20-30 kilometers. The main malfunctions and their effect on fuel consumption are in the table. It will be cheaper to repair!

Refueling with cheap fuel, do not rush to rejoice: measure the mileage on this gasoline. It may well be that the cost of the distance traveled eventually increased - the engine made up for the lack of calorific value of fuel by its quantity.

The main factor: the human

As it is not trite, but on the style of your ride fuel consumption depends not less than on the technical condition of the car and the quality of gasoline! And someone in their defense will say: "I like fast driving, and I'm ready to pay for it!" For the pleasure of speed, the feeling of the full power of the engine - I agree. But for missing the right turn, lost in the end time - is it worth paying for it?

1. When driving from a hill, you need to turn off the gear.
This advice was just about 30 years ago. With the advent of EPHH (economizer forced idling) in carburetor systems, and even more so on modern injector motors when braking the engine (gearbox), the electronics shut off the fuel supply, and it consumes 0! When the same transmission is turned off, the gasoline consumption is resumed, and the economy ends. By the way, the PHX regime is very useful for the motor - there is a drift of fumes and soot. Therefore, from the hill - only in the transfer - and more economical, and more useful, and better from the point of view of traffic safety!

2. It is necessary to switch faster to higher gear.
The most economical engine speed is within 2500-3500 rpm. This is due to the best conditions for ventilation of the combustion chamber (at high suction rates in the cylinders there are increased turbulence that better mix gasoline with air and prevent detonation).
With a decrease in speed (up to 1500), consumption is increasing, although not much. Well, with a drop in turnover below 1.5 thousand, gasoline consumption is growing significantly - the mixture of idling starts to interfere with the addition of "extra" fuel. In addition, the exhaust gases from the cylinders go badly, and the fresh mixture does not burn completely. Therefore, do not particularly "tighten" with the shift to a lower gear.

3. When driving in traffic, you need to constantly muffle the engine.
The Council is fair only if you have more than a minute to stand, and you probably know this (for example, if you stop at the "long" traffic lights). If you jam and start the engine often, it's the other way around, resulting in over-consumption and increased wear on the motor. As well as rapid failure of the battery. Do you want it?

4. Need to slow down slowly.
Smoothly - yes. But not slowly: a prolonged movement in the lower gears will lead to overspending. Of course, at the moment of acceleration, the instantaneous flow rate is significantly increased, but the more short it is, the faster the engine will go to the optimum operating mode and reduce the consumption of gasoline.

5. Spoiler (wing) reduces consumption.
In no case. He has a different task - better to press the car to the road. And he does it due to additional resistance to air flow (read: additional fuel consumption). And the larger the area and the angle of the spoiler, the more it affects the flow. If you are not going to overcome steep bends on the track with the highest possible speed, from the wing in order to save is better to give up. In an extreme case, "for beauty" choose a "neutral" spoiler, which does not have a pronounced angle of attack and is just an imitation of a sports accessory.

1. Do not press the accelerator pedal all the way.
By this you re-enrich the mixture. Add gas with increasing speed, "outperforming" the engine with a pedal a maximum of one-third. It is especially true for driving on a lower gear: if you push the pedal "on the floor" at 1500 revolutions, you will not achieve anything other than a significant overspending.

2. Correctly and in time switch.
Movement at both too low and too high turns leads to overspending. As already mentioned, the optimal speed of rotation of the crankshaft is recognized in the interval between 2,500 and 3,500 revolutions. There is no tachometer - learn to navigate the sound of the motor.

3. Avoid high speeds.
The air resistance increases in proportion to the square of the speed! If your car consumes about 7-8 liters per "hundred" at a moderate speed, you can rest assured: at 180 km / h its "appetite" will grow liters to 16-18!

4. Control the flow of instruments.
When driving on the highway, it is best to turn on cruise control. In this case, the electronics itself selects the optimal (and, therefore, more economical) modes of engine operation. In urban conditions, it is not superfluous to include an average fuel consumption. If there is no boron computer on an old car, put a vacuum economometer for 50 hryvnia, which is suitable for any car. Sometimes one "skew" look at the oversized expense rate is enough to Very disciplined.

"Councils and myths are verified." I agree . "
Sergey Nikolaychuk, participant, technical consultant of the only economy rally in Ukraine "Skoda Grand Prix Ukraine"

Comfort is not free. But...

For convenience, we often agree to pay. But sometimes it turns out that to give up comfort does not make sense at all. For example, fuel consumption during the movement of a small car at a speed of 120 km / h with the air conditioning and closed windows is about 8 liters. But open windows with the conditioner turned off "cost" in 10.5 liters. The phenomenon is explained simply: the air conditioner "brakes" the engine less than the aerodynamic resistance of open windows.

In all other cases, the additional equipment included leads to over-consumption of fuel. Powered by a significant volume of radio tape recorder, the included rear window heater, the heater fan in the "swing" position, the far and dipped beam - all this increases the consumption. In total, the charge for this load on the generator can be up to 15% overrun. But to save on this, perhaps not worth it. Moreover, these costs can be fully compensated by using the following "small" tips: