Points of accounting for gas consumption, produced by industry

The membrane counter (diaphragm, chamber) is a gas counter, the principle of which is based on the fact that with the help of various mobile conversion elements the gas is divided into volume fractions, and then they are cyclically summed. 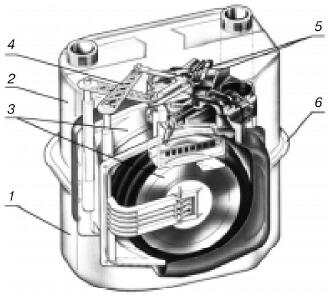 The diaphragm meter (Figure 8.10 ) consists of a housing 1, a cover 2, a measuring mechanism 3, a crank mechanism 4 connecting the moving parts of the diaphragms (membranes) to the upper valves 5 of the gas distribution device, valve seats (bottom of the switchgear) and a counting mechanism . The housing and the counter cover can be:

Depending on the design and volume of the gas being measured, the measuring mechanism can consist of two or four chambers. A schematic diagram of the operation of the diaphragm counter is shown in Fig. 8.11 . Fig. 8.11 . Schematic diagram of the operation of the diaphragm counter.

The counter works as follows:

It is necessary to remove the counter from the gas pipeline (here not everyone can restore the seals on the union nuts) !!!!!!

The essence of the methods up to offensive is simple - inside the outlet branch pipe it is necessary to break the tightness of the connection between the plastic insert and the meter body.   I just flexed the plastic slightly with a screwdriver and pinched the sealing rubber ring with tweezers and removed its result, exceeded all expectations, the counter twists less.
I understand that meters of this type are very sensitive to the pressure drop of gas inlet / outlet after this procedure, you can put a part of the sealer in place, and then I did not turn the poor guy when turning on the gas stove ....
I started counting only when the gas boiler was on. That's it. After this, put the meter on its place and restore the seals.
Sergey Frolov.

In the turbine gas meter (Figure 8.13 ), under the influence of the gas flow, the turbine wheel is driven into rotation, the number of revolutions of which is directly proportional to the flowing volume of the gas. The speed of the turbine through the reduction gear and gas tight magnetic coupling is transferred to the counting mechanism located outside the gas cavity, showing (incrementally) the total volume of gas under operating conditions that has passed through the device. 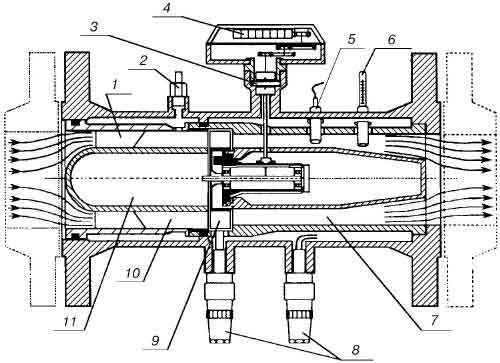 The last gear wheel of the reducer is fixed with a permanent magnet, and near the wheel there are two reed switches, the frequency of closing the contacts of the first is proportional to the rotor speed of the turbine, i.e., the gas flow rate. When a powerful external magnetic field appears, the contacts of the second reed switch are closed, which is used to signal the unauthorized interference.

Structurally, turbine meters produced in Russia are a segment of a pipe with flanges, in the flowing part of which an inlet stream rectifier, a turbine unit with a shaft and bearing bearings and a rear support are arranged in series. On the body of the meter there is a plunger oil pump unit, through which a liquid oil is fed through the tubes to the bearing zone. On the body of the turbine there are places for installation of sensors of the equipment (for measuring pressure, temperature, pulses).

By the degree of automation of measurement and processing of measurement results, turbine meters are available in the following configuration options:

In connection with the increase in the types of equipment, there was a need for measuring instruments that would have a relatively large throughput and a significant range of measurements with relatively small overall dimensions. These conditions are met by rotary gas meters, which additionally have the following advantages: no need for electricity, durability, the ability to monitor the serviceability of the pressure drop on the meter during operation, insensitivity to short-term overloads. Rotary counters are widely used in municipal services, especially in heating boilers, as well as in small and medium-sized enterprises.

Rotary (rotary) counter is a chamber gas meter in which eight-shaped rotors are used as the converter element.

The rotary gas meter of the RG type consists of a casing 1 inside which two identical eight-shaped rotors 2 of the transfer and counting mechanisms rotate, connected to one of the rotors. The rotors are rotated by the difference in pressure of the gas flowing through the upper inlet and exiting through the lower outlet pipe. When rotating, the rotors roll over their lateral surfaces. Synchronization of rotation of the rotors is achieved by using two pairs of identical gears, fixed at both ends of the rotors in the end boxes outside the measuring chamber-housing. To reduce friction and wear, the gears of the rotors are permanently lubricated with oil poured into the end boxes.

When manufacturing rotary counters, special attention is paid to the ease of rotation of the rotors and the reduction of unrecorded gas leaks through the meter. The lightness of the stroke, which is a qualitative indicator of the small friction in the mechanism and, consequently, of the small loss of pressure in the counter, is ensured by fitting the rotor shafts to the ball bearings, minimizing friction in the reducer and the counting mechanism, and also by rational choice of the design dimensions and rotor speed. Reduction of gas leaks is achieved by careful processing and mutual adjustment of the inner surface of the body and the friction surfaces of the rotors. The gap between the body and rectangular areas located at the ends of the largest diameters of the rotors varies from 0.04 to 0.1 mm, depending on the type of the counter. When manufacturing meters, special attention is paid to static balancing and processing of rotors.

Vortexes are flowmeters based on the dependence of the frequency of pressure oscillations arising in the flow in the process of vortex formation or oscillation of the jet either after an obstacle of a certain form established in the pipeline or a special twisting of the flow.

Vortex flowmeters have received their name from the phenomenon of vortex shedding that occur when an obstacle flows around a fluid or gas stream, usually in the form of a truncated trapezoidal prism (Figure 8.9 ). Behind the flow body is a sensing element that senses vortex oscillations

The merits of vortex flowmeters include: the absence of moving parts, the independence of readings from pressure and temperature, a large measuring range, a frequency measuring signal at the output, the possibility of obtaining universal calibration, a relatively low cost, etc. 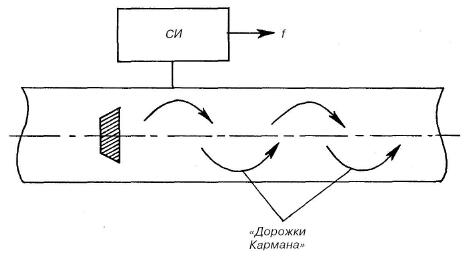 The drawbacks of vortex flowmeters include significant pressure losses (up to 30-50 kPa), limitations of their application: they are not suitable for low flow rates of the medium, for measuring the flow of contaminated and aggressive media.

Acoustics are called flowmeters based on the measurement of a particular effect that occurs when oscillations pass through a flow of liquid or gas and depending on the flow. Almost all acoustical flowmeters used in practice operate in the ultrasonic frequency range and are therefore called ultrasonic.

Most industrial ultrasonic flowmeters use effects based on the movement of acoustic vibrations by a moving medium. They serve to measure volumetric flow, because the effects arising from the passage of acoustic vibrations through the flow of a medium (liquid or gas) are related to the velocity of the medium. In Fig. 8.8 shows the primary transducers of ultrasonic flowmeters.

To introduce acoustic oscillations into the flow and to receive them at the outlet from the stream, radiators and oscillation receivers are needed - the main elements of the primary transducers of ultrasonic flowmeters. When compressing and stretching in certain directions of some crystals (piezoelements), electric charges are formed on their surface, and vice versa, if a potential difference is applied to these surfaces, the piezoelectric element will be stretched or compressed depending on which of the surfaces is more stressed - Piezoelectric effect. These effects are based on the method of transforming the variable electrical potential difference on the crystal faces into acoustic (mechanical) oscillations of the same frequency (for radiation of oscillations) or vice versa - the transformation of acoustic oscillations into an alternating electric potential difference on the crystal faces (for the oscillation receiver).