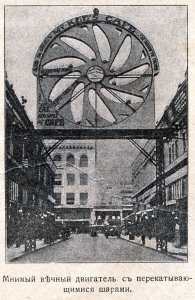 Perpetual mobile (Latin Perpetuum Mobile) is an imaginary device that allows you to get a useful job more than the amount of energy reported to it.

Attempts to study the place, time and cause of the idea of ​​a perpetual motion machine are a very difficult task. It is no less difficult to name the first author of such a plan. The earliest information about Perpetuum mobile seems to refer to the Indian poet, mathematician and astronomer Bhaskara, as well as some notes in the 16th-century Arabic manuscripts kept in Leiden, Goth and Oxford [1]. At present, the ancestral home of the first eternal engines is rightly considered to be India. So, Bhaskara in his poem, dating from about 1150, describes a certain wheel with obliquely attached on the rim of long, narrow vessels half filled with mercury. The principle of operation of this first mechanical perpetuum mobile was based on the difference in the moments of gravity created by the fluid moving in the vessels placed on the wheel circumference. Bhaskara justifies the rotation of the wheel quite simply: "A wheel filled with liquid in this way, being placed on an axis lying on two fixed supports, continuously rotates by itself." The first projects of the eternal engine in Europe date back to the era of the development of mechanics, around the 13th century. By the XVI-XVII centuries, the idea of ​​a perpetual motion machine was particularly widespread. At that time, the number of projects of perpetual motion machines that were submitted to the patent offices of European countries was growing rapidly. Among the drawings of Leonardo da Vinci was found an engraving with a drawing of a perpetual motion machine.

A selection of perpetual motion machines invented at different times, handles for a note!