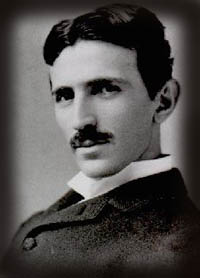 He invented the radio before Marconi and Popov, received a three-phase current before Dolivo-Dobrovolsky. On his patents, in essence, the entire power industry of the twentieth century has grown.

Nikola Tesla already by 30 years has done so much, which many lacks and a lifetime. After that - things that are understandable to a normal person end and some kind of continuous mystification begins, lasting about 40 years.

Tesla carries out wireless transmission of electricity at a distance of 42 km (so far no one has been able to repeat it and could not), several decades worked on the energy problem of the entire universe. He tried to learn how to control cosmic energy. And establish communication with other worlds.

Tesla did not patch many of his discoveries, he did not even leave any drawings. Most of his diaries and manuscripts are not preserved, and many inventions have survived only fragmentary information to this day. And hundreds of legends. Tesla is also credited with the Tunguska catastrophe (1908).

This collection of articles is devoted to the greatest inventor, the Slavic genius - Nicole Tesla