Recommended for all brands of cars (all types of fuel - gasoline, diesel fuel, gas).

The effect of the application is noticeable after the first 5-10 kilometers of the car. 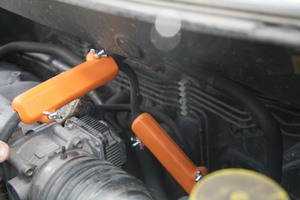 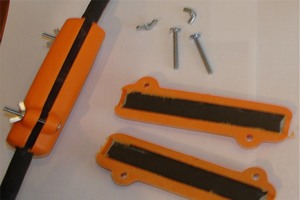 The fuel combustion activator consists of 20 magnets (magnetic fields of different directions, north-south is constantly changing). Mounted on the fuel hose of any car without a tie-in. Magnetic fields act on fuel molecules.

Fuel improves its structure, its quality. As a result, the level of combustion increases, and fuel is saved by 15-20 percent.

Fuel during engine operation does not completely burn out, its residues are thrown into the exhaust, they wear out the engine piston system faster, and the need for excess fuel increases.

Why is this happening?

Any fuel, regardless of where it is stored, is constantly exposed to temperature and humidity. As a result, it expands and contracts, and hydrocarbon molecules (the basis of any fuel) form molecular groups - “clumps of molecules” that do not completely burn in the engine. This applies to any type of fuel, including high-octane gasoline.

When the fuel passes through the zone of installation of the Activator, magnetic frequency resonance scatters the resulting "clumps" of individual molecules. Thus, oxygen molecules penetrate each fuel molecule, and the air-fuel mixture burns completely.

This results in lower fuel consumption and lower emissions.

The principle of the activator

Liquid fuel (gasoline, diesel fuel, fuel oil) is a mixture of various products of oil distillation (hydrocarbons). Each of the components of the fuel has its own chemical composition, its chemical and physical properties, its structure and size of the molecules. A distinctive feature of the substances that make up the fuel mixture is that their molecules are non-polar. That is, their molecules do not have a pronounced charge, neither positive nor negative. However, attraction between nonpolar molecules can occur. Electrons that are in constant motion may for a moment be concentrated on one side of the molecule, that is, a non-polar molecule (uncharged) becomes polar (charged). This causes a redistribution of charges in neighboring molecules and intermolecular bonds are established between them.

At a certain distance between the molecules, the forces of attraction and repulsion balance each other and a stable system is formed, consisting of a large number of different molecules (clusters) of the fuel mixture. 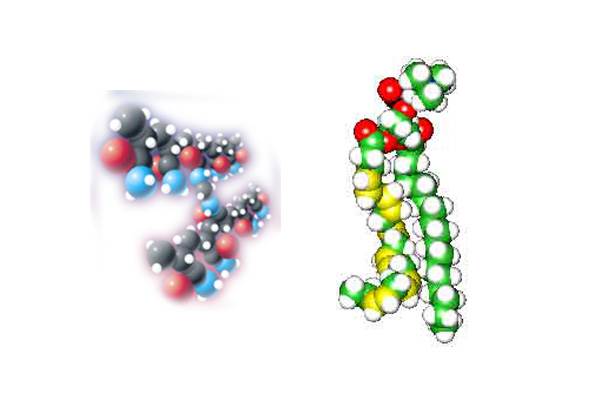 The activator is two rows of magnets. Opposite magnets in the rows are pairs with different poles: north-south (NS), and the polarity of the pairs of magnets varies. At the same time, the direction of the lines of force of the magnetic field created by the pairs of magnets also changes by 180 degrees.

This can be seen from the figure below: 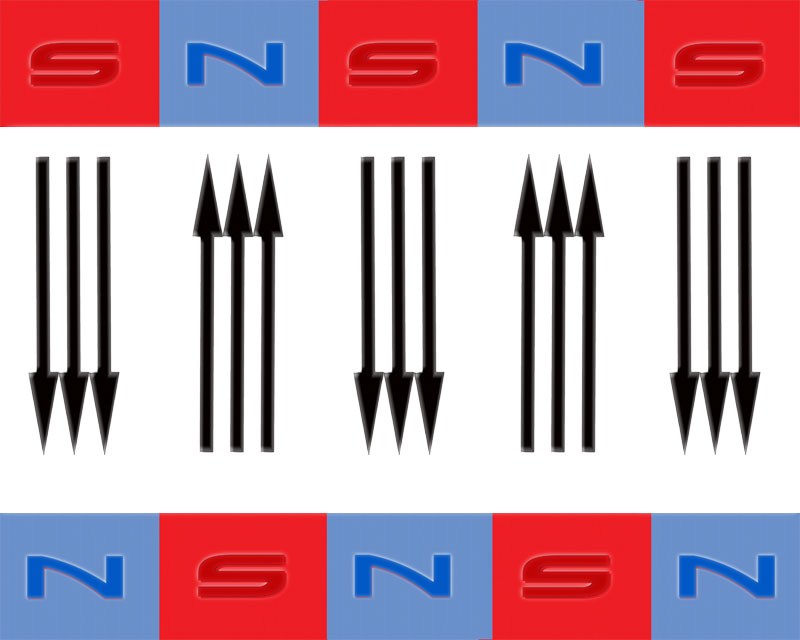 Let us consider simplistically what happens to a single fuel molecule when passing through the magnetic fields of Activators. 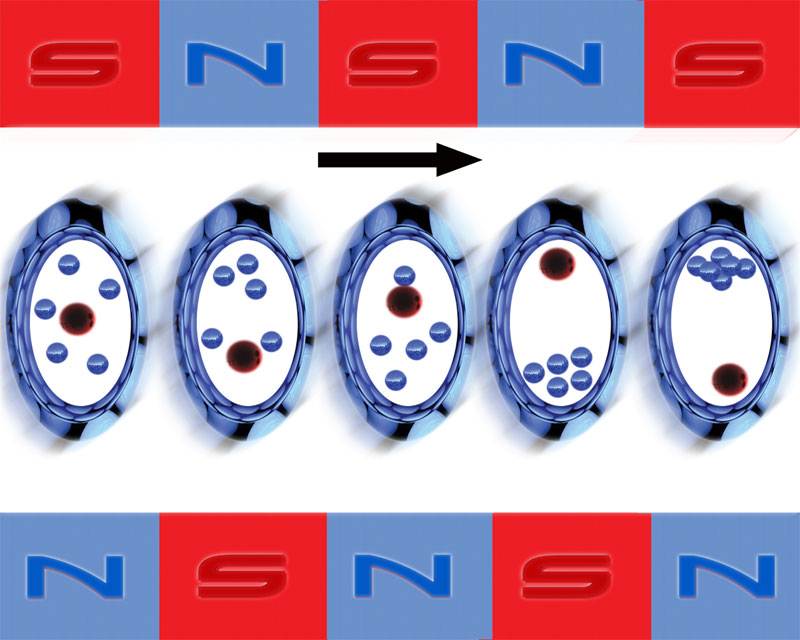 The electrons in the molecule are the most mobile parts of the molecule and clearly respond to the lines of force of the magnetic field. Once in the first field of the Activator, the electrons slightly change their trajectory in the direction of the north pole of the magnetic pair. When a molecule is transferred by a stream to a second field, the electrons again rush to the north pole of the magnetic pair. At the same time, the trajectory of their movement is more and more extended towards the north pole. When a molecule is transferred by a stream to the following magnetic fields, the trajectories (orbitals) of the electron motion are even longer and they are concentrated in the northern part of the molecule, and the positively charged nucleus shifts toward the southern part of the molecule. That is, partial polarization of the fuel molecule begins. One side of the molecule, facing north, due to the concentration of electrons there, begins to acquire a negative charge, and the other part of the molecule, facing the south pole, due to the displacement of a positively charged nucleus there, is a positive charge. Such a partially polarized molecule, when transferred by the flux to the next magnetic field, begins to oscillate itself.

When a charged molecule is transferred by a stream to the next magnetic field of the Activator, in which the S and N poles are opposite, it is energetically disadvantageous for the molecule to transfer the electrons inside itself to the north and the nucleus to the south. Such a molecule leaves electrons and the nucleus in the same places, but it rotates 180 degrees so that the electrons are directed closer to the north, and the nucleus - to the south. When already in the next magnetic field, the molecule again sharply turns around 180 degrees, and this turn can occur both to the right and to the left.

We examined the behavior of an individual molecule located in a stream of fuel passing through the magnetic fields of the Activator.

We considered earlier that in real fuel, which you fuel your car, all fuel molecules are interconnected into large clusters (clusters).

Moreover, since during the passage of fuel molecules through the magnetic fields of the Activator, shifts of electrons and nuclei inside the molecule occur, as a result of this, the energy of bonds inside the molecule changes. They bend and partially even rupture. This releases a significant amount of energy when burning fuel.

Diagram of the breakdown of clusters into molecules

To summarize the above, we briefly formulate the principle of action of the Activator:

The reliability of all of the above you will determine in the first kilometers of your car.

Consider how all of the above will affect the operation of your car:

The activator of fuel combustion is installed on cars and trucks of all brands, tractors, boats, regardless of the type of fuel (gasoline, diesel fuel, gas.)

Complete set: one set of the Activator consists of two parts. In each part there are ferrite magnets located in a patented way. The device is shockproof, withstands the temperature regime from –40 to + 110.

Performance check: after 10km. driving a car with an activator installed, the driver by ear determines the reduction in engine noise, and feels the increase in car power.

Installation: two halves of each part are tightly applied on both sides to the fuel hose and connected with two screws. (The length of the screws ensures the installation of the Activator on a hose with a diameter of 6 mm. To 18 mm.). The gap between the halves is the norm.

Basic installation principle: The activator is installed on the fuel hose between the fuel tank and the engine in any convenient place (for fuel supply !!!). The main thing is that the fuel, before entering the engine, passes through the magnetic fields of the Activator.

Limitations !!! Never place the Activator on a steel surface (steel fuel hose, steel braid). If the protective hose is put on the fuel hose, it must be removed before installation.