Emoji (from japanese picture and - sign, symbol, pronunciation: [emodzi]) - language of ideograms and smileys used in electronic messages and web pages. This graphic language, where combinations of pictures are used instead of words, appeared in Japan and spread all over the world. Initially emoji looked like a pictogram language, where symbols were used in the same way as in ASCII emoticons, but had a wider range of uses, and the icons themselves were standardized in the keyboard, which became available on mobile devices. Some emoji characters have a specific meaning in Japanese culture: for example, a bowing businessman, ioriten, a white flower designating a "brilliantly performed homework", or a group of symbols for a popular meal: ramen, dango, onigiri and sushi.

Unlike emoji, emoticons arose as a means of depicting emotions by existing typographic means on the initiative of users. Nevertheless, some emoji, which designate persons, are referred to as emoticons.

The first emoji was created in 1998 or 1999 by Sigetaka Kurita, a member of the group that was working on the creation of the i-mode mobile Internet platform, which was launched in the NTT DoCoMo operator network. The first set of 172 emoji characters with a size of 12x12 pixels was developed as part of the messaging functions for i-mode to facilitate electronic communication and became a feature distinguishing this platform from other services.

However, in 1997, Nicolas Laufrani, drawing attention to the growing popularity of ASCII-emoticons in mobile technologies, began experimenting with animated emoticons, in order to create colorful icons that would correspond to the existing ASCII-emoticons, consisting of simple punctuation marks, to improve them for More interactive use in digital communication. Of these, Laufrani created the first graphic emoticons and compiled an online dictionary of emoticon, broken down into separate categories: "Classical", "Emotions", "Flags", "Holidays", "Entertainment", "Sport", "Weather", "Animals" , "Food", "Nationalities", "Professions", "Planets", "Zodiac", "Babies"; For the first time these images were registered in 1997 at the US Copyright Office, subsequently these icons were placed as .gif files on the Internet in 1998 and became the first ever graphic emoticons used in technology. In 2000, the "Emoticon Catalog", created by Laufrani, became available on the Internet for downloading by users to cell phones via the site smileydictionary.com, which collected more than 1000 emoticon emoticons and their ascii versions. The same catalog was subsequently published in 2002, in a book published by the Marabout publishing house, entitled "Dico Smileys". In 2001, Smiley began to license the rights to use the graphic emoticons of Laufrani when downloading emoticons to cell phones by various telecommunications companies, including Nokia, Motorola, Samsung, SFR (vodaphone) and Sky Telemedia. 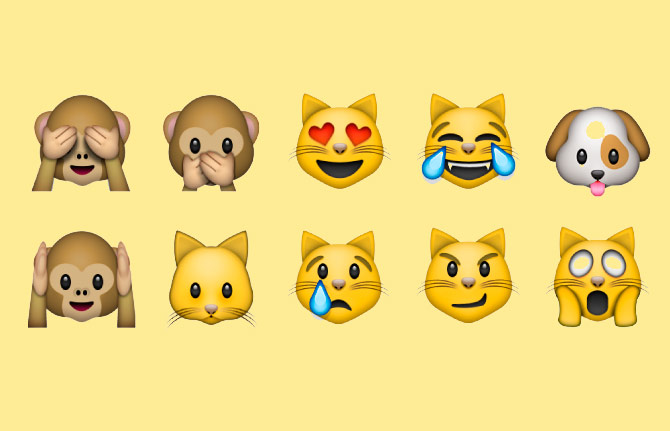 It is believed that the emoji icons were developed in the late 1990s under the influence of Japanese comics and were one of the ways that a particular mobile device could attract a potential buyer. Until the time when Unicode standardized emoji, they might not be displayed in the message if the sender and the recipient used different media. With the adoption of standardization, this problem was partially solved.

When the iPhone 3G came out in 2008, it quickly became popular around the world, but in Japan it was criticized because it did not support emoji. Apple could not ignore a large sales market, and the icons began to be supported on all iPhones, starting with iOS 5.

This week, Apple's new operating systems came out with more than 150 new emoji characters. They are included in the update of iOS 9.1 and OS X El Capitan 10.11.1. The language of ideograms and smileys has seriously widened, but not all of them have figured out with badges. MacDigger has decided to prepare some tips to help you understand what emoji characters mean on the iPhone and Mac.

Learn the meaning of each smile on your Mac 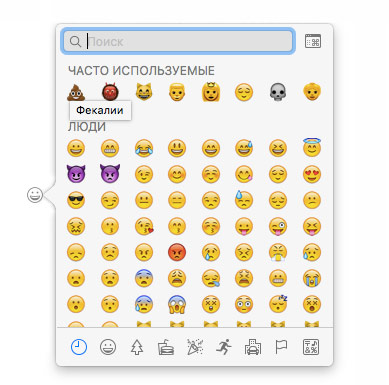 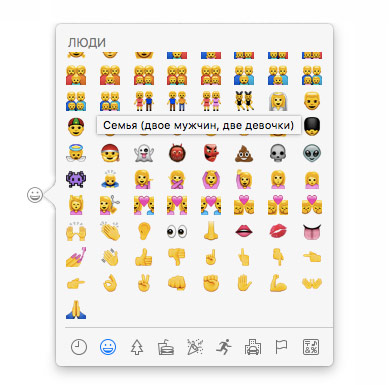 Step 1: In the Messaging application in OS X, click on the smiley button to open the Emoji panel.

Step 2: Find the smiley on the list, the value of which you want to know.

Step 3: Move the cursor over the icon and after a few seconds a tooltip with a description will appear. 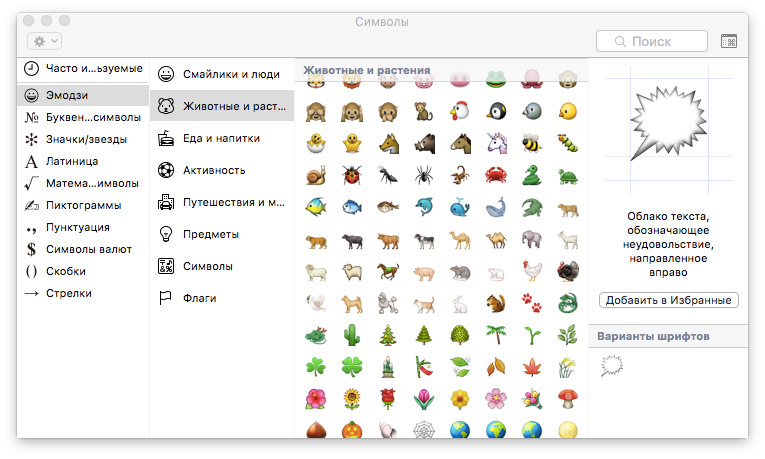 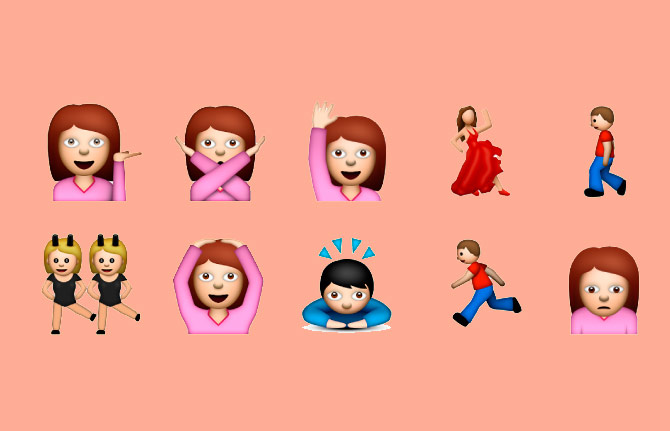 Step 1: In any application on the Mac, click on the top line Edit -> "Emoji and Symbols", or use the keyboard shortcut Ctrl + Cmd + Spacebar. This will cause a window with all the characters present in the OS.

Step 2: In the left sidebar, select the appropriate section.

Step 3: Specify the emoji you want to know the meaning of.

Step 4: The description of this emotoji will be presented on the right side.

Learn the meaning of each smile on iPhone 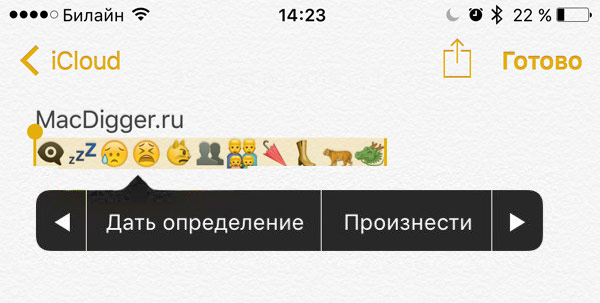 Step 2: Open the Speech section and turn on the tongue switch. The rest of the settings, including Dialects and Highlight words, can be left by default.

Step 3: Open any text application, for example Notes, switch to the smiley layout and enter one or more icons.

Step 4: Select the text in the usual way and click on the new menu item Pronounce.

For some reason, the pronunciation function does not work in iOS 9, but it is still available on older versions of iOS. Probably, it is a program error, and in the future Apple will solve the problem.

Find the meaning of each Emoji on the official website

You can find out about emoji characters using the Emojipedia site. This is a kind of Wikipedia in the world of emoticons. The resource is dedicated to emoji characters and contains detailed information about each of them. 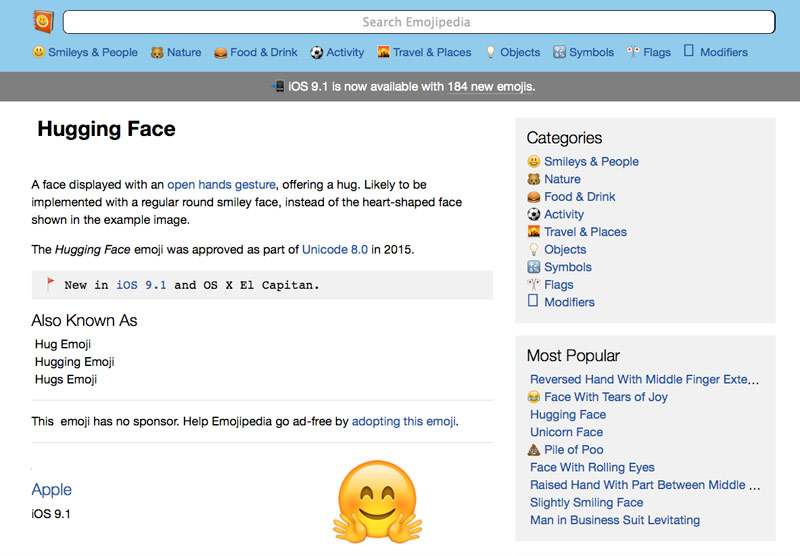 Here, the meanings of all the difficult to interpret pictograms are explained. Each card with the decrypted value can be shared in social networks. 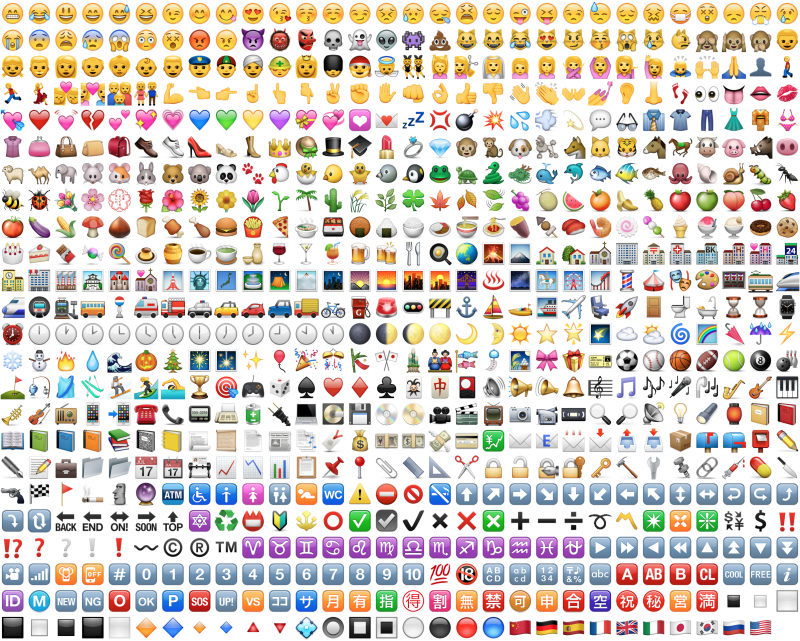 Emoji increasingly used in modern culture, fixing their status as another language of communication. For example, in October 2009, successfully completed kraudfanding campaign book "Emoji Dick" based on the novel "Moby Dick", in August 2013, released a video of Katy Perry, the plot of which was transmitted through emoji. And in March last year, the international association, made with the help of pictograms, was presented by the international association PETA.