Chernobyl: an accident with catastrophic consequences 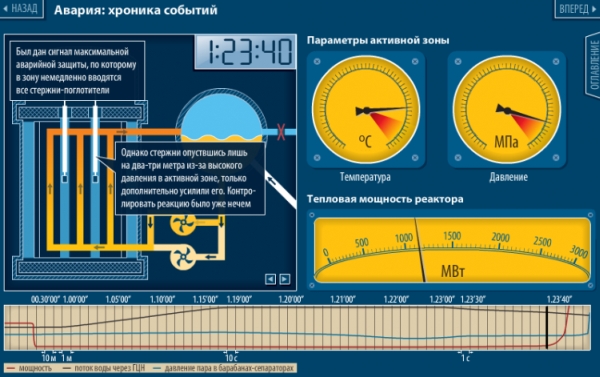 On the night of April 26, 1986, at 1:35 pm, the fourth nuclear power plant in the world suffered the largest nuclear accident, with partial destruction of the reactor core and the release of fission fragments outside the zone. According to experts, the accident occurred due to an attempt to make an experiment to remove additional energy during the operation of the main nuclear reactor. According to scientists, the experiment was necessary in order to learn how to shut down the reactor, in particular, in wartime.


The accident at the Chernobyl nuclear power plant on April 26, 1986. Was the greatest ecological catastrophe in the modern history of mankind.
The International Atomic Energy Agency (IAEA), created by the world community, is called upon to monitor the use of atomic energy for peaceful purposes on a global scale. August 25-29, 1986, the IAEA experts' conference was held, devoted to the analysis of the causes of the Chernobyl accident and the radiological consequences of the disaster. The report on the causes, consequences and lessons of the Chernobyl disaster was made by Academician V.A. Legasov. This report (INSAG-1) was published in the journal "Atomic Energy" (volume 61, issue 5, November 1986) under the title "Information on the Chernobyl accident and its consequences prepared for the IAEA".
Additions to Report No. 1 (INSAG-1) were made in 1993. And in IAEA documents recorded as an INSAG-7 report.
INSAG - International Nuclear Safety Advisory Group - IAEA International Advisory Committee on Nuclear Safety.


INSAG-1
The root cause of the accident was an extremely unlikely combination of violations of order and operating conditions.
The saturation of the modern world with potentially dangerous industrial production, significantly exacerbating the consequences of military operations, raises in a new plane the question of the meaninglessness and inadmissibility of war in modern conditions.
Another side of nuclear safety is the prevention of nuclear terrorism.
The accident of Chernobyl NPP once again demonstrated the danger of nuclear energy coming out of control and made it possible to feel the destructive consequences of its military use.
While developing and solving the problems of safe use of atomic energy, it is absurd to simultaneously develop ways and methods of the most dangerous and inhuman use of nuclear energy.

INSAG-7
It is not known for certain, from what the jump in power started, which led to the destruction of the reactor.
Until now, not one of the scientific organizations in the USSR has published a sufficiently substantiated whole version, which explains the emergence and development of the emergency process.
Calculations of American specialists do not confirm the statement about the change in power and explosion within a minute of testing.
There is no mention of any external thermophysical perturbation.
It is not possible to make a final conclusion about the lawfulness or inaccuracy of the actions of the personnel due to the contradictory nature of the requirements of the regulations.
In INSAG, the content of the concept of "safety culture" is beyond the scope of purely operational activities and has covered all activities ... even the highest spheres of government, including legislative and governmental, which, according to the concept, must form a national climate in which security is a matter of daily attention.
In the country, virtually no one is responsible for the safety of the operated stations ... The right to make a decision is divorced from responsibility for it ... There are dangerous objects, and those responsible for them are not responsible.
Investigations of the causes of the Chernobyl accident can not be considered complete, and they must be continued in order to establish the truth and draw the necessary lessons for the future.

9. Photo gallery "Before and After the Holocaust. How Chornobyl Changed in 25 Years" (2011)