The Law On the State Budget 2012 provides for the following minimum subsistence level and minimum wage for 2012.

The minimum salary for 2012

The draft state budget for 2013, approved on September 13, 2012 at a meeting of the Cabinet, set a living wage (on average per person)

For children under 6 years

For children from 6 to 18 years

For the able-bodied people

For persons with disabilities

The draft budget also sets the level of the minimum wage for 2013 .

The minimum wage is the statutory amount of wages for simple, unskilled labor, below which there can be no payment for the monthly and hourly rate of work performed by the employee (scope of work) (Article 95 of the Labor Code of Ukraine).

The minimum wage is a state social guarantee, mandatory throughout the territory of Ukraine for enterprises, institutions, organizations of all forms of ownership and management and individuals.

This is the last year's increase in the subsistence level and all related payments. 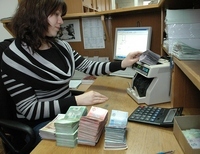 It should be noted that the law on the state budget for 2013 was quite economical: the subsistence level and all the social payments associated with it throughout the year, one can say, hardly increased. The minimum wage, pensions and benefits raised in January. And the next - the last this year - an increase is planned for December.

As we have already said, in connection with the increase in the subsistence minimum, all payments related to it will increase. To begin with, from December 1, the minimum wage will rise from 1147 to 1218 hryvnia. And also all salaries to state employees.

Increases payments to families with children and child benefits.

For example, help with the birth of the first child will increase by 1 thousand 800 hryvnia - up to 30 thousand 960 hryvnia. At 3 thousand 600 hryvnia will help with the birth of a second child, which will rise to 61 thousand 920 hryvnia. And for 7 thousand 200 hryvnia will increase payments to the third and all subsequent children - up to 123 thousand 840 hryvnia. In addition, minimum and maximum amounts of childcare assistance will be increased to the age of three, as well as assistance to single mothers, payments to children under guardianship or guardianship, orphans and those whose parents evade child support.

Most importantly, in the country for 55 hryvnia will grow a minimum pension, which is set at the subsistence level for disabled people - from 894 to 949 hryvnia.

Also, the minimum payments to disabled people - liquidators of the consequences of the Chernobyl accident, as well as war invalids and combatants ( see Table 2 ) will also increase. Recall that in our country for them the increased size of the minimum pension (from 165 to 285 percent of the subsistence minimum).

Increase in December those allowances to pensions, which depend on the subsistence level. For example, the maximum payment for the experience - from 8 hryvnia 94 kopecks to 9 hryvnia 49 kopecks for each "extra" year. Donors will be paid extra UAH 110, 80 kopecks, and 117 UAH 60 kopecks (10 percent of the subsistence minimum per person on average). There was also an increase in the children's war premium (amounting to 7 percent of the subsistence minimum for disabled persons) - from 62 hryvnia 58 kopecks to 66 hryvnia 43 kopecks . Increases were also raised for war veterans ( see Table 3 ).

Specifically, we emphasize that we are talking about an increase in existing premiums and increases, and not about the appearance of new additional payments to pensions since December. All allowances are assigned to retirees at the same time as pension calculation. But then their size grows as the subsistence minimum increases.

All types of pensions for special merits will be raised, amounting to 20 to 40 percent of the subsistence minimum (from UAH 189 to UAH809 to UAH379.00), as well as state social assistance for care and payments to Chernobyl victims.

On November 19, the Verkhovna Rada adopted a bill initiated by the Cabinet, which introduces the norm on the enrollment of childcare leave for children up to 3 years in the insurance record of women and will be taken into account when calculating pensions. Every year, 500 thousand women leave for such a holiday in Ukraine. For each mother, this decision is confidence in the future, strengthening of social protection.

Ministry of Social Policy is developing a package of proposals on the possible return of women with young children to work. In particular, a draft law has been prepared that will allow women with children to work remotely. On the one hand, a woman will be able to pay attention to the family, on the other hand, have additional earnings, gradually return to work. Regardless of whether a woman decides to work as a career or devote herself to the family, she will have the opportunity to realize her decision.