Paper airplane in many ways 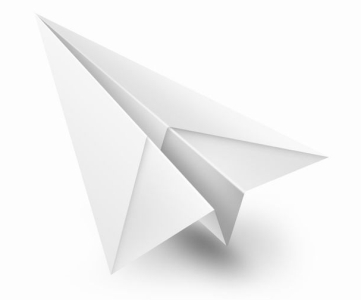 Now you will learn many ways how to make an airplane from paper, until this day, personally I knew two ways, and you?

A paper airplane (airplane) is a toy airplane made of paper. It is probably the most common form of aerogami, one of the branches of origami (Japanese art of folding paper). In Japanese, such an airplane is called kami hikoki (kami = paper, hikoki = airplane).

This toy is popular because of its simplicity - to make it simply even a beginner in the art of folding paper. The simplest aircraft requires only six steps [the source does not specify 226 days] for complete addition. Also, a paper airplane can be folded out of cardboard.

History of the Paper Airplane

To use paper to create toys, scientists believe, began 2000 years ago in China, where the manufacture and launching of kites were a popular form of pastime. Although this event can be regarded as the source of modern paper airplanes, it is impossible to say with certainty exactly where the invention of the kite occurred; As time progressed, more and more beautiful designs appeared, as well as species of kites with improved speed and / or load-lifting characteristics.

The earliest known date for the creation of paper airplanes is 1909. However, the most common version of the inventor's time and inventor's name is 1930, Jack Northrop co-founded Lockheed Corporation. Northrop used paper airplanes to test new ideas for the design of real airplanes. On the other hand, it is possible that paper airplanes knew even in Victorian England.

There is an unlimited [source not specified 226 days] number of types of paper airplanes that fly differently, keep altitude and land.

This type of aircraft is composed of only 6 steps, and if you do not follow the instructions for determining the center of the sheet - then for 5.

Use a rectangular sheet of paper, for example A3, A4 or Letter (preferably A4 or Letter). 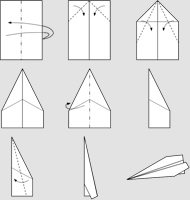 There are many people who claim that they made the "World's Best Paper Airplane". An example is the model DC-03, which has large wing wings and, perhaps, the only one of its kind having a tail unit. There is no international federation of paper aircraft construction, therefore, these statements can not be officially tested for accuracy.

Although the DC-03 model has wings, the holder of the record registered in the Guinness Book of World Records, Ken Blackburn does not agree with the decision of its creators to add tail feathers to the paper airplane. The explanation of the aerodynamics of paper planes, placed on his website, proves that the tail fin is simply not necessary. Blackburn uses a real bomber B-2 Spirit like a flying wing as an example, confirming the assumption that the weight distributed over the front part of the wing makes the aircraft more stable.

Regardless of it, in 1977 Edmond Hui developed a paper airplane, similar in shape to a stealth bomber, on the basis of hang-glider aerodynamics, and named it Paperang [3]. The only one of all paper airplanes, it has really working aerodynamic surfaces and long narrow wings, and its design allows changing each parameter of the shape of the aircraft. In 1987, the book "Amazing Paper Airplanes" was published about this airplane, and in 1992 he became the object of several newspaper publications. Paperang can not be used in most paper airplane competitions due to the use of a paper clip in its design, but with good stability it has an exceptionally large coefficient of relative planning range - more than 12 (i.e., with a loss of 1 m height, the plane flies more than 12 m horizontally).

Although it is believed that light paper airplanes fly farther than heavy, this claim is disputed by Blackburn. The Blackburn plane, which broke the world record more than 20 years ago (in 1983), was developed on the assumption that the best airplanes have short wings and are "heavy" at the time of the launch phase when a person throws them into the air. Although longer wings and less weight would help, as it seems, the aircraft achieve a longer flight time, but such a paper airplane can not be thrown out high. According to Blackburn, "to achieve maximum altitude and a good transition to the planning flight, the throw must be made with a deviation of not more than 10 degrees from the vertical" - this shows that the speed of the aircraft necessary for a successful throw must be at least 100 km / h.

In 1989, Andy Chipling founded the Association of Paper Aircraft Manufacturers, and in 2006 the first championship to launch paper airplanes was held. Competitions are held in three disciplines: the longest distance, the longest planning and aerobatics.

Numerous attempts to increase the residence time of a paper airplane in the air from time to time lead to the taking of the next barriers in this sport. Ken Blackburn kept the world record for 13 years (1983-1996) and again received it on October 8, 1998, throwing a paper airplane in the room so that he stayed in the air for 27.6 seconds. This result is confirmed by representatives of the Guinness Book of Records and CNN reporters. The paper plane, used by Blackburn, can be classified as a glider.


Instructions how to assemble a paper plane