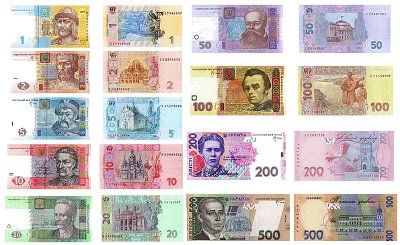 Hryvnia is a monetary-weight unit of Ancient Rus and other Slavic countries. Already in the VIII - IX centuries when carrying out trade operations, paying tribute, it was used as a measure of weight and account.

The name "hryvnia" comes from the name of jewelry made of gold or silver in the form of a hoop, which was worn around the neck (i.e., on the "scruff") and called the hryvnia. The hryvnia was considered a luxury item, only rich people could afford it.

History of the Ukrainian hryvnia

Since the XI century in Kiev Rus in circulation were "Kiev" hryvnia, which were of silver, had a hexagonal shape and weighed 150 grams. They existed before the Tatar-Mongol invasion. In the north-western lands, there were also "Novgorod hryvnia", which from the middle of the 13th century spread to the whole territory of the Old Russian state. They looked like long silver sticks, weighed 240 grams and existed until the end of the XV century. The transition from the "Kiev" to the "Novgorod" was the "Chernigov" hryvnia, in form very close to the "Kiev", and by weight - to the "Novgorod".

In the XV century, in connection with the increase in the scale of coinage and continuous damage, the ingot "hryvnia" ceased to be a monetary unit. The hryvnia continued to exist only as a unit of weight and lasted until the 18th century only as a weight coin - "hryvnia".

In the 13th century in Novgorod, half of the hryvnia was called "ruble". Gradually, the ruble (in Ukrainian "karbovanets") ousted the hryvnia and entrenched itself as a monetary unit, and later became the main unit of the Russian monetary system.

According to the author of the first banknotes of modern Ukraine Vasily Lopata, in April 1991 famous artists of the Ukrainian SSR were invited to participate in the development of sketches for a new Ukrainian currency. In addition to V. Lopata, the group included People's Artist of Ukraine A. Danchenko, Honored Art Workers of Ukraine V. Perevalsky, Honored Artists of Ukraine V. Yurchishin, S. Yakutovich.

Work on creating banknotes was held under the auspices of the Verkhovna Rada Commission on Economic Reforms and National Economy Management, as well as the Commission for Culture and Spiritual Revival. People's deputies of Ukraine Leonid Tanyuk, Pavel Movchan, Dmitri Pavlychko, Vladimir Yavorivsky, Ivan Zaets and others took part in this work.

Drafts of banknotes were considered by the Presidium of the Verkhovna Rada under the chairmanship of Leonid Kravchuk, who approved the sketches prepared by V. Lopata.

The Central Rada March 1, 1918, after the proclamation of Ukraine as an independent state, adopted a law on the introduction of a new monetary unit - the hryvnia, which was divided into 100 steps and equaled 1/2 of the karbovanets. Throughout 1918 in Berlin, banknotes were issued in denominations of 2, 10, 100, 500, 1000 and 2,000 hryvnia. The hryvnia was introduced into circulation since October 17, 1918 and withdrawn from circulation during the monetary reform of 1922 - 1924.

The Verkhovna Rada of the Ukrainian SSR decided to print its currency back in the days of the Soviet Union in May 1991. Initially, according to the Soviet model, it was planned to issue banknotes in denominations of 1, 3, 5, 10, 25, 50, 100, 200 hryvnia, however, as a result, the American model was adopted, by replacing bills 3 and 25 with 2 and 20, respectively. The design of banknotes was approved in 1992, and the Ukrainian hryvnia was circulated in 1996 after the decree of President Leonid Kuchma of August 25 "On monetary reform in Ukraine."

Since January 10, 1992, temporary Ukrainian banknotes, called coupon and nominated in rubles, were put into circulation. Officially, they were called karbovantsi and existed until 1996, assuming the entire inflationary blow. September 2, 1996, the exchange of karbovans to hryvnia began in the ratio of 100,000 krb = 1 hryvnia. From that day only hryvnias were issued in banks. The exchange procedure lasted until 1998.

In March 2004, the National Bank of Ukraine approved the graphical sign of the national currency - the hryvnia. It is a lowercase handwritten letter "g", crossed in the middle by two horizontal lines. 1 hryvnia = 100 kopecks. The currency code in the standard ISO 4217 - UAH, digital - 980.

Description of the banknote

On the front side of the banknote are: portraits of prominent figures of history and literature of Ukraine, inscriptions "Ukraine" or "Ukraine" and "National Bank of Ukraine", the nominal value of banknotes in words and figures. The design is complemented by ornaments and rosettes, which are made with multi-color printing. Portraits, inscriptions and individual decorative elements of banknotes are embossed in relief.

On the reverse side of the banknotes in the center there are images of historical and architectural monuments of Ukraine, above which the inscription "National Bank of Ukraine" is inscribed. In words and in four corners, the figures denote the nominal value of banknotes, and from the bottom - the year of approval of a sample of banknotes. The design of the banknotes is complemented by rosettes, ribbons and ornaments, made with multi-color printing.

In banknotes with a nominal value of 1 (1995), 2 (1995) and 5 (1997) hryvnia, a polymeric metallized tape with a coded nominal width of about 1.3 mm is placed vertically in the thickness of the paper between the watermark and the portrait. Viewing the banknote against the light as a dark strip with a transparent repeating inscription "1 ГРИВНА", "2 ГРИВНЫ" and "5 ГРИВЕН";

In banknotes with a nominal value of 20 hryvnias of the 1995 model, a vertical metallized "window" tape is placed between the watermark and the portrait. On the front side of the banknote, it periodically (6 times) leaves the thickness on the surface of the paper of the banknote. This part of the tape is noticeable, it looks like a shiny dotted line. When looking at the banknote against the light, the entire tape has the form of a continuous dark line crossing the banknote across.

The figure is located in one place on the front and back sides of the banknote, all elements of which coincide and complement each other when considering a banknote against the light (the ornament on the left side of the banknote).

Gradual transition of one color of the protective mesh, made by continuous lines without breaks, into the other (protective nets and ornaments on both sides of the banknote).

Thin lines are located at different angles, which when copying or scanning the banknote form a "moiré" (protective mesh) on the copy.

The latent digital image of the denomination on banknotes 2 (1995), 5 (1994, 1997), 10 (1994), 20 (1995), 50 and 100 hryvnia, visible when considering a banknote at the eye level at an acute angle Against the light when it is rotated by 45 degrees (rectangular ornament to the right of the portrait) and a latent image of the trident (the digital denomination denomination in the upper corners of the front side of banknotes with a nominal value of 2-20 hryvnias of the 1992 sample).

The inscription of the continuously repeated word "Ukraine", abbreviations "NBU", which can be read with a magnifying glass.

Badge for the Blind

Chaotically located in the thickness and on the surface of paper from both sides of the banknotes of the fiber:

Design elements of the front side and back side of the banknotes and coded picture (50 and 100 hryvnia), which in the ultraviolet rays fluoresce with yellow, green or yellow-green light (depending on the denomination).

Print, which made the numbers of banknotes. She leaves on paper thickened from the edges of the stroke ink print and a relief deepened trail. On the reverse side of the paper, as a rule, has a convex embossed impression.

Sharp transition of one color to another without rupture, imposition or displacement of the drawing lines (portrait, inscriptions, ribbons, ornaments) ..

Banknotes of various years of release

October 5, 2011 on the occasion of the 20th anniversary of the establishment of the National Bank of Ukraine, memorable banknotes with a nominal value of 50 hryvnias of the 2004 model (2011 of issue) were put into circulation. On the front side of the banknotes with a special paint, changing the color from golden to green depending on the angle of view, the inscription "NBU 20 rock" (Russian "NBU 20 years") is printed. A total of 1000 banknotes were printed; They are a legal tender in the territory of Ukraine and function in circulation along with banknotes of 50 hryvnias of the 2004 model of previous years of issue.

Chronology of the introduction of the circulation of hryvnia banknotes

The table shows the dates of issue of banknotes in circulation and the signatures on banknotes.