Useful information ... Where to transfer used ...

Where can I get used batteries? Addresses 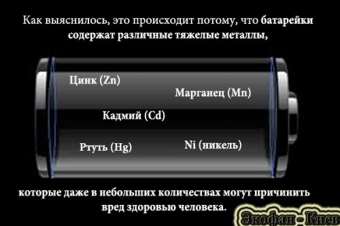 The console stopped working, the radio for some reason refuses to catch music, the second hand stops at the dial of the electronic clock ... In most cases, it requires repair simply by replacing the old battery, after which the problem will be solved - the device will again work. However, despite the fact that the ability to switch channels, listen to the radio or wake up on time with the replacement of the battery immediately resumes, this simultaneously becomes the cause of a new problem, and much more global and environmental.

The fact is that a battery that is not properly disposed of properly or a battery has a very negative effect on the environment. So, just one finger battery that got into the usual garbage bin could eventually contaminate up to 20 m3 of soil or 400 liters of water (according to the data of the Timiryazev State Biological Museum, Moscow). Of course, this harm extends to the plants of this area, and to animals. After all, at the notorious 20 meters of land in the forest, on average two trees grow, two moles, one hedgehog, several thousand earthworms live.

Do not underestimate the harm to humans: the metal coating of batteries eventually breaks down and the heavy metals contained in them fall into the soil and groundwater, and from there - into food from poisoned plants and animals and into the water that flows from our faucets or artesian Wells. Heavy metals from batteries, previously worked for the benefit of man, now begin to "play" against it - accumulate in the body, affecting internal organs (liver, pancreas, kidneys), and sometimes even causing cancer.

The whole scale of the problems associated with used batteries has already been realized in many countries. For example, in most European countries, old batteries can be put in a special container in a supermarket. In Japan, however, batteries and accumulators are scrupulously collected and stored until better times - when an optimal method for their disposal is found. But in Ukraine the situation is rather sad: a person who does not want to harm nature will have to look carefully to find the points in which he can bring back the used batteries. And not always he will agree to accept them on a free basis. It is unlikely that this state of things can cause people's enthusiasm and force them to take this issue with due attention. After all, throw the old battery into the urn and faster, and easier.

. For any questions regarding this project, you can contact his supervisor - Dmitry Gramadanov (095 885 36 73)

Points of reception of used batteries

The initiative group "Ecofan" headed by Rita Oksyuta organized in the capital the points of reception of used batteries.

In the winter of 2012, 14 such points were created in Kiev and 1,500 batteries (36 kg) were collected in six months. All the collected batteries were sent to the Lviv state enterprise "Argentum", where the batteries are first sorted by type, then grinded and separated (dry or wet), as a result of which the materials inside zinc, lithium, and nickel are separated.

Now the activists decided to continue collecting batteries and created a new, permanently operating "VivaBat" project, which provides not only the establishment of points for reception of used batteries for their subsequent disposal, but also informing the public about the importance of proper handling of used batteries.

All ecofans know that used batteries can not be thrown into the trash, because they contain a "rattling mixture" of harmful substances that pollute the earth and water. From now on, it's easier to turn the used batteries into recycling. In each of 285 stores Watsons Ukraine in 89 cities of Ukraine there are special containers for collecting batteries.

Addresses where you can and should take old batteries

In the shops of "Podorozhnik" at the gas stations of the KLO : this is the most mass participant of the action - at 52 refuellings, in the cash desk zone there are containers for collection of used batteries.

The newspaper "Day" did not just write a few materials about this initiative, but also installed a collection box at the reception at its reception.

The restaurant "Taras Bulba" (Victory Ave., 84b) put a box for collecting batteries in the "Pancake" house.

Several boxes are in the KPI .

In Kiev, Simferopol and Lugansk used batteries can be taken to the store company "I-MNE" or the courier of this store.

On the issues of putting used batteries in your city, you should contact activists of the all-Ukrainian project "Ecofan" in the social network "VKontakte". The action, in principle, raschitana cities that take Euro 2012, but we think the guys will be able to suggest something useful.

Simple advice: go, if possible, to batteries - they have to throw out much less.