All about World of Tanks 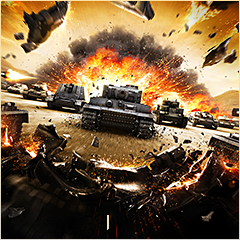 World of Tanks is a massive online multiplayer game entirely dedicated to mid-20th century armored vehicles. Players have the opportunity to fight side by side with fans of steel giants from all over the planet, defending their claims to world tank domination.

An advanced system of pumping and development will allow you to experience any of the machines presented in the game. Whether you like to exhaust the enemy in brisk light tanks, make violent breakthroughs on universal mediums, incinerate enemies with gigantic “heavy weapons” or you want to become a first-class sniper, controlling long-range artillery, a machine of any class can be a truly deadly weapon in the hands of a true professional.

However, even the strongest players will not be able to succeed alone. In World of Tanks, the team decides everything, and victory is achieved due to the coordinated work of the team, where each player has a role to play.

Obtaining the WOT player's identifier and his number of victories

WOT EFFICIENCY online is a collection of data that shows how efficiently you play, inflict damage and prove yourself in battle. It was with the help of a calculator that tankers began to be judged in randomness. In the same way, the player is evaluated when he is taken into the clan. The combat effectiveness of WOT has become an alternative to a simple indicator of the percentage of victories, since the latter does not fully reflect the game of a particular person. The WOT automatic efficiency calculator allows you to evaluate a set of factors that show how well a player plays in World of Tanks.

We have described all the WOT cards , there are game tactics on each type of equipment, schemes of driving, attack and defense. Here you will find pictures where places where art or PT are usually located, attack lines of CT or TT are indicated. We also recommend that you watch the video guide on the World of Tanks maps, 10-15 minutes of video can greatly help in future battles. You will have an understanding of how to act on each of the cards, how to play in the Oncoming battle and Assault modes.

Video guide on maps and tanks World of Tanks

Our site has the largest assembly of video guides on tanks . For your convenience, the video guides for the tanks are divided by nation ( USSR , Germany , USA , China , France , Great Britain , Japan ) and classes ( LT , ST , TT , PT , self-propelled guns ). There you will find a description of each nation, where there are details about the advantages and disadvantages, the scope of the battle and tips for choosing. In addition, a description of each type of equipment for each nation is laid out, because WOT tanks have unique characteristics and their role in battle. We hope that all these articles will help you increase the level of the game, as well as determine which tank to pump in the first place.

Everyone has long known this mod, many use and even create their own assemblies. The World of Tanks oleneometer is not only a clever minimap and an indication of glare in the team’s ears, but also a display of player statistics, a chance to win, and much more. The most popular reindeer gauge assemblies from famous guide-dealers ( From Dzhova , Virtus PRO , Dukaliz , PRO Tanks and Maracasi ) are collected for you. Download the XVM mod and win in the random house more often.