The approach to life stages ...

Approach to the stages of the product life cycle

Having released a novelty on the market, the management prays that it should have a long and happy life. Although no one expects that the product will be sold forever, the firm seeks to ensure a decent profit as compensation for all efforts and risks associated with the appearance of a new product. The management hopes that the sales will be high and long-term. It knows that each product has its own life cycle, although the nature and extent of this cycle is not easy to predict.

A typical product life cycle is represented by the curve in Fig. 55. Four stages are clearly distinguished in this cycle. 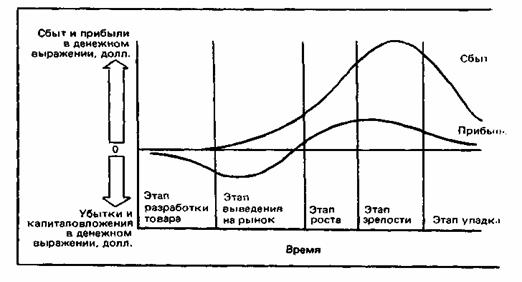 Fig. 55. The nature of sales and profits over the life cycle of a product from its creation to decline

1. The stage of launching on the market is a period of slow sales growth as the product enters the market. Due to the high costs for the removal of goods, profits at this stage are not yet there.

2. The growth phase is a period of rapid perception of the product by the market and rapid growth of profits.

3. The maturity stage is the period of slowing the sales pace due to the fact that the product has already reached the perception of the majority of potential buyers. Profits stabilize or decline due to increased costs of protecting the product from competitors.

4. The stage of decline - a period characterized by a sharp drop in sales and a decrease in profits.

Although the product life cycle curve presented here is typical, it does not always look that way. One of the frequently encountered variants is the curve "with a repeated cycle" (see Fig. 56a) 6. The second "hump" of sales is caused by sales promotion activities conducted at the stage of product decline. Another variant is the "scallop" curve (see Figure 56b), consisting of a series of cycles generated by the discovery of new product characteristics, new ways of using it, the emergence of new users. For example, the "scallop" type curve is characterized by the sale of nylon, Which is explained by the appearance over the years of many new areas of its use - parachutes, stockings and underwear, shirts, carpeting. 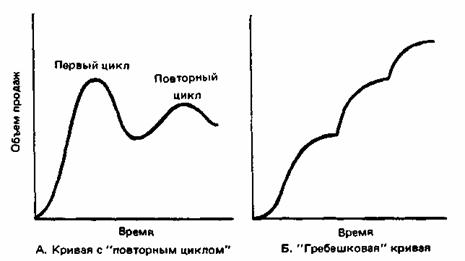 The concept of the life cycle can be used to describe a whole commodity class (cars with gasoline engines), a variety of goods (convertible cars) or a specific brand ("Mustang"). In each of these cases the concept of the life cycle has a different character. The longest life cycle of commodity classes. Sales of many product classes are delayed for a long time within the maturity stage. And vice versa. Varieties usually have a typical life-cycle curve. Products such as dial phones and deodorant creams go through a regular cycle of bringing to market, rapid growth, maturity and decline. The history of an individual brand depends on its success and on the effectiveness of attacks and counterattacks of competitors. The life cycles of a number of well-known car brands are shown in Fig. 57. 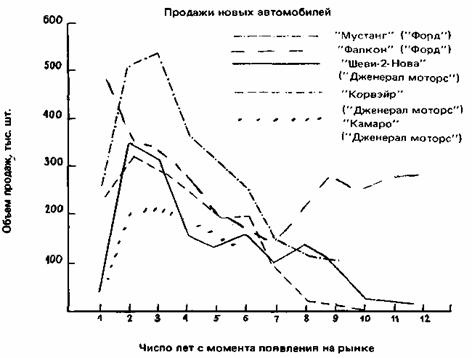 The concept of the life cycle can be applied to such famous phenomena as style, fashion or fetish. Their life cycles are described in box 24.

Box 24. The Life Cycle of Styles, Fashion and Fetishes

In the markets where styles and fashion rule, there is a cycle. Market operators should be able to understand these cycles and predict them.

Style is the main peculiar form of expression that arises in this or that sphere of human activity. For example, there are styles in dwellings (colonial, ranch style, Cape Cod style), clothing (evening, everyday, for the soul) and art (Realistic, surreal, abstract). Once created, the style can exist for many generations, then gaining wide popularity, then losing it. The style is characterized by a cycle with several periods of increased interest.

Fashion - the most popular or common style in this period of time in this field of activity. For example, today in clothes in a fashion jeans, in dances - "a new wave". Fashion goes through four stages in its development. At the stage of bright individuality, some consumers are beginning to be interested in some novelty, trying to stand out from among those around them. This novelty can be a product made to order or produced by someone from the manufacturers of a small batch. At the stage of imitation, new consumers are beginning to be interested in other consumers, driven by the desire to emulate fashion leaders, and the product begins to be produced in larger batches by a larger number of producers. At the stage of mass distribution, fashion becomes extremely popular, and manufacturers produce goods on a mass scale. And finally, at the stage of decline, consumers are beginning to switch to other areas of fashion, coming to the fore. Thus, the fashion goes through a period of fairly slow growth, remains popular for some time, and then a period of slow decline sets in. The duration of a single stage in the fashion cycle is very difficult to predict.

Fetishes are particular manifestations of fashion that quickly gain universal attention, are perceived with great enthusiasm, quickly reach a peak of popularity and very quickly go to the stage of decline. The cycle of their recognition is short, and, as a rule, the number of their adherents is limited. Fetishes are often characterized by some unusual trait or some sort of quirk. For example, people suddenly start buying "favorite cobblestones" or running naked and painting large strands of hair under gray hair. Fetishes are appealing to people who are either looking for something unusual, or want to stand out from the environment, or are hungry for topics to talk with others. Fetishes are transient, because they either do not satisfy any strong need, or they satisfy it clearly insufficiently. It is very difficult to predict whether something will just be a fetish, and if so, for what time - for several days, weeks, months. Among other things, the life expectancy of a fetish depends on how the mass media give it a lot of attention.